I took up the hurdy-gurdy, which has become a central part of the Serpentyne sound

Paul Castles takes the plunge into the deep end of Serpentyne, talking with the singer Maggiebeth Sand and Mark Powell (hurdy-gurdy and guitar) about the band’s new album, summer tour schedule, Game of Thrones and all things mediaeval.

Hi guys, thanks for talking with Midlands Rocks. Can you just start by telling us a little about the new album The Serpents Kiss?
Maggiebeth: This is our third album. Lyrically, it follows mainly the same themes as before, but the band has now moved more into a rock-metal style, as it seemed a natural progression from our previous world-music persona. The songs just natural evolved.

MR: Is there a theme running through some of the songs?
Maggiebeth: Yes; songs such as ‘Jeanne d’Arc,’ ‘Helen of Troy,’ and ‘The Serpent’s Kiss,’ based on the story of Anthony and Cleopatra, continue our earlier theme of powerful female figures, and other songs, such as ‘Spirits of the Desert’ continue with the fantasy-mythological basis of our previous albums. ‘Salterello’ also carries on with the medieval motif, and we also feature our own version of the Game of Thrones theme on the new album.

MR: How did the recording process go in the studio?
Mark: Maggie and I each have a home studio with virtually the same equipment and software, so we can very easily exchange ideas – thanks to Dropbox! We tend to work separately, Maggie recording her vocal tracks, including all her layered choir voices, and me adding the instrumental parts, each one building on what the other has done, then when a song is nearly complete, we get together to revise it and finish it off with the rest of the band. We’ve been operating that way for the past few years, and it seems to work. For some recordings, such as drums, we use a professional studio, but most of it can be done at home.

MR: The Serpents Kiss is your third album, how has your sound developed and grown?
Maggiebeth: It’s been a natural development. The first album was almost entirely acoustic, though we added some electric guitar and keyboard sequences. The second incorporated more of those elements, which worked very well, so it was just a natural move to bring in heavier guitars and move into rock-metal territory.

Mark: Our second album, Myths and Muses, although we didn’t intend it to be anything other than a Serpentyne album, was picked up and reviewed by prog and metal magazines, who all liked it. We don’t contrive our music to fit into a particular genre- to do so would sound forced and contrived. Whatever we do carries the signature Serpentyne sound, and if prog or metal followers like it, that’s all well and good! 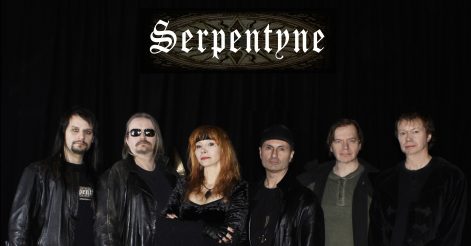 MR: I see you’ve got one or two interesting festivals coming up?
Maggiebeth: Yes, we’re making our debut performance at the Camden Rocks Festival on June 3rd, when we’ll be playing at Camden Assembly. Then on June 17th and 18th we have a return visit to the Wellingborough Festival. On June 22nd, we’re very honoured to be supporting Ritchie Blackmore’s Rainbow at Manchester Arena. We had a very nice e-mail of encouragement from Ritchie Blackmore back when we started, and it’s good to think that he’s remembered us! That is followed by two new festivals for us: Conwy in North Wales on the 24th July, and the Asgardian Festival in Staffordshire on July 28th and 29th. Apart from that, we have club and other venues throughout the summer and autumn.

MR: Any plans to go overseas this year?
Mark: As yet, no. The change in the band’s sound and line-up meant that we had to take time out to write and rehearse new material, so we’ve deliberately cut back on gigs for a while. Next year, though, we expect to resume the rounds of the European festivals, which we’ve always enjoyed playing before.

MR: Could you name a band or two that you have all followed and possibly inspired you?
Maggiebeth: Within Temptation, Nightwish, Led Zeppelin, Pink Floyd, Eluveitie, Steeleye Span, Gryphon, Jethro Tull and loads more!

Mark: Really, there are too many to list. I listen to all types of music, and inspiration may come from any of a number of sources.

MR: At Easter you played the Quinphonic Festival in Birmingham with four other female-fronted bands. How did that event go?
Maggiebeth: Very well! The organisers picked a good choice of bands, all of which were different, but complemented each other well.

Mark: What was nice about it was that, although each band brought its own followers, the audience, some of whom had never heard us before, were very receptive, and both they and we had a great time. 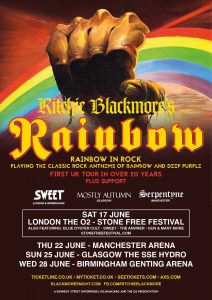 MR: The mediaeval sound and imagery has always been strong with the band. Is this an interest that you all share?
Maggiebeth: My mother was a professional opera singer, though she also liked traditional music, so I grew up to a background of both. It was natural for me to develop my interest in the traditional/medieval field, as I’ve always loved those types of music. It was equally natural for mediaeval and folk themes to find their way into our songs, both lyrically and musically. This gave me the opportunity to learn to sing in other languages, Latin, Old English, Occitan (which is an old form of French) and Irish Gaelic. Apart from piano and voice, I’ve always been interested in other instruments, so I’ve learned to play the Celtic harp, the nyckelharpa, which is a Swedish keyed violin, the harmonium, the harpsichord, bouzouki and citole (the medieval guitar.) I also play some hand percussion and overtone flutes. In the current format of Serpentyne, as it has become more rock-metal, I focus on singing, but being able to play these instruments is an inspirational tool for the writing and arranging process, and they sometimes find their way onto our recordings.

Mark: When I first got into music professionally, I worked a lot on the folk music scene, as I also love folk, world and mediaeval music. When I was doing music A-level, I remember complaining to our teacher that the syllabus did not go far back enough! I also got into other music styles as a teenager, jazz and what we now call World music, and these tastes and influences have stayed with me. In the rest of Europe, the whole mediaeval-world music scene is very much stronger than it is here, and more integrated into mainstream rock; they see it as a perfectly wholesome marriage, and I’m pleased to see a growing acceptance of it over here! My main instrument has always been piano, with guitar and other strings as secondary, but I took up the hurdy-gurdy, which has become  central part of the Serpentyne sound, when I worked on a theatrical production in which I had to play the part of a minstrel, as well as arranging the music. I didn’t own an appropriate instrument at the time, so that was the perfect excuse to buy one!

MR: Some of your tracks would sit well on Game of Thrones! Is that a series you all follow?
Maggiebeth: I wasn’t sure if I would get hooked at first, but after the first two episodes, I started becoming more involved in the story. I particularly like some of the female characters, such as Arya Stark, for her strength and bravery. I also like Tyrion Lannister; I find his sense of humour fascinating. Of course, I identity with Daenerys Targaryen and her dragons, which remind me of medieval fantasy tales.

Mark: Er… I’m going to sound like a traitor here, but I could never get into it. Sorry! I do like other historical dramas or fact-based films and TV series though; I enjoyed The Tudors, and am looking forward to the next series of Vikings.

Both: Thanks to Midlands Rocks and its readers for your support of our music! We hope to play more around your part of the country in the near future. Hope to see you soon!