It’s a cathartic experience; it’s a way to silence my mind…

Finland’s purveyors of chaos and wrath, Desolate Shrine returned with vehemence and vengeance on 13 January 2015 with the release of The Heart of the Netherworld on Dark Descent Records. Featuring seven of their darkest invocations to date, the band continue to twist old-school-tinged death metal into new and frightening forms. Here, mainman and multi-instrumentalist L.L. speaks to MR’s Jason Guest about all things abominable…

Thanks for taking time out for this interview and congratulations on The Heart of the Netherworld (reviewed here). This is your third album. What did you want to achieve with it? Were there any specific goals that you set yourselves?

We didn’t have any specific goals set other than make the album as good as possible in every way. That means a perfect marriage of music, lyrics and artwork. We are on a path that was set on The Sanctum of Human Darkness and this (the new LP) is more or less a continuation for it. It does not mean that it sounds the same or that there’s no progress between the albums. I’d say that we found our way – what we want to sound and look like – therefore there’s no need to change for the sake of change.

The Heart of the Netherworld is not a concept album but it does carry a certain theme throughout the album: The album the lyrics are based on M.L’s personal life, occultic workings, studies and findings.

I did have a certain vision that I wanted to follow but there was a lot of room to do whatever was necessary. The Heart of the Netherworld was supposed to be build around two long and epic tracks and it was supposed to have some elements that will be carried throughout the whole album. Two long tracks became three but the consistency did remain. Sonically the album start as it ends but the mood is different. Once the “main pieces” were put together, it was easy to figure out what there should be next. Is there too much/little intensity, melodies, speed, doomy stuff etc. It was a huge task to balance between these elements.

How did you approach composition for the album? Is there a process that Desolate Shrine follows, such as lyrics first, then guitars, etc…?

Most of the time it starts with guitar; there’s riffs, themes and arrangements in my head that I’ll do my best to capture. I’m not an excellent guitar player so many times the riffs change a bit from the original idea. This time I did some composing with piano as well which feels a bit different. You’ll come up with different chord progressions that probably would not pop up with just guitar in your hand. But yeah, most of the time it’s guitars first, then bass and programmed drums for demoing purposes. Then when all the song structures are set in stone it’s time to rehearse and record the drums. Vocals come last when everything else is done.

The band has two vocalists. When composing, are the tracks written with this in mind?

The vocal arrangements don’t affect the song writing process in anyway. We do have some idea what kind of vocals this and that part needs, but riffs and parts are not done thinking about vocal arrangements. We treat vocals as the additional instrument that could change the mood quite dramatically from time to time and we experiment a lot with them to see what works the best.

Musically speaking, does the album mark a progression since 2012’s The Sanctum of Human Darkness? How is it reflected in the album?

We wanted to portray a bit different side of the band on The Heart of the Netherworld this time. Sanctum was and is ultimately an anti-mainstream-statement – an album that is heavy in every way for the listener. No easy riffs and arrangements to hold onto. We were building up for a climax that never came because fuck you. Unsurprisingly not every people have liked the album and I can’t really blame them. But for the same reason it also has a really oppressive and suffocating aura which was exactly what I was aiming for. At first it was hard to sell for the vocalists too but once they understood what I’m trying to do, they really delivered with their performances.

When I started working with The Heart of the Netherworld I knew that this path (Sanctum) was now done and there’s no going back anymore. Even if I wanted I probably could not write “part 2” for The Sanctum anyway. So it was time to go with a bit more riff oriented route. Also we didn’t want to dwell in the deep depression but instead wanted to rise up from it with a new-found strength. I think the new album is more aggressive and powerful. 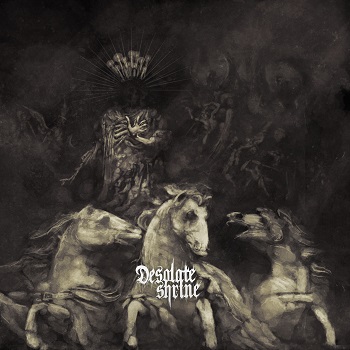 The artwork for the album is very powerful. Can you tell us about the design, what it represents, and how it relates to the music?

Before I start working with artwork I study the lyrics carefully while listening to the (semi)ready album. The artwork draws inspiration from two things: firstly, of course, the lyrics. That’s where most of the subjects are founds. Secondly some of the artwork is more abstract and are based on the atmosphere that the songs give off. They are the visual representation of that.

Does having two vocalists have an impact on the writing of the lyrics? And how do you decide who will perform what?

Both vocalists are on the same page and do their best to sing the lyrics so there’s no need to differentiate who sings what.

What opportunities does having two vocalists give the band that having one vocalist otherwise wouldn’t?

The voices are quite different so that’s obvious but for the most important and interesting thing is the fact that both vocalists have a surprisingly different approach how they arrange their parts. We do experiment a lot while recording the vocals parts and try out different things with different singers. R.S. might come up with completely different than M.L. has done and vice versa. It’s a lot of work as there are no set parts for each vocalist but I think it’s absolutely worth it. We could have done alternative versions of these albums with vastly different vocal arrangements that you hear now.

Is there a theme, a concept, or a philosophy that underpins Desolate Shrine’s music?

It’s there within the music/artwork/lyrics.

For me it’s a cathartic experience. It comes from the necessity – I have to purge these ideas, riffs, chord progressions that are taking over my head. It’s a way to silence my mind for a while. I feel unbearable anxious I can’t do something creative – art or music.

Which is more important to Desolate Shrine, the music, the lyrics, or the atmospherics?

All of them. The band is all of those. The music, lyrics, atmosphere and artwork are entwined together and the band would not exist or would be completely different one without all of those different aspects.

It’s a double-edged sword. As a consumer I’m really happy with all the possibilities internet has to offer. I do use streaming services a lot. I’ve found many bands and songs from vastly different genres as it’s so effortless nowadays. The negative side is that people (including me, yes) lack commitment. “The good old days” we didn’t have as good opportunities to listen to whole albums via YouTube/torrent but relied much more on your friends and/or magazines etc. I did not have lots of money but still went to the record store and bought albums. Some were really good; some were not. I still gave those albums many, many spins even if they didn’t sound good to me at first. I think we had much more, er, stamina to endure albums that did not grab with the first three listens. Many of these “hard” albums are now my favourite records and many of those who did make a great first impact have been forgotten years ago.

I’m not going to rant about the business side – it’s being talked to death at the moment anyway. This is where we are now: It’s harder for bands to get a decent budget for studio but on the other hand the recording equipment has gotten exponentially cheaper.

I’ve been on a break with Desolate Shrine for now – doing other projects. I have no plans, for now for the new material. The Heart of the Netherworld did suck me dry of the inspiration for awhile but I feel that this might change in near future. We will see.

At this moment there are no plans for gigs. I’ve suffered a semi-serious leg injury and haven’t been playing drum for a while. I’ll have to start playing again and see how it works before committing for any plans for now.

What would be the ideal setting for a Desolate Shrine performance?

A forest. Or an abandoned church in a forest. 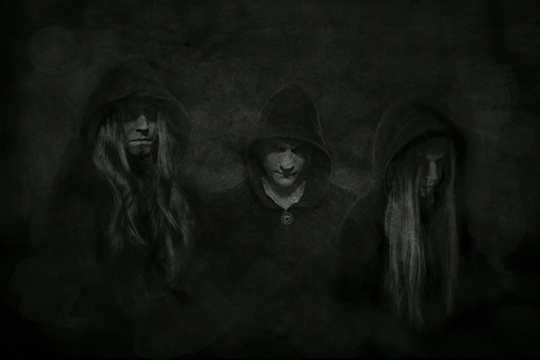