With this record I felt we took a couple of steps forward, not just one.

Mithras stopped off at Mama Roux’s in Birmingham on their recent UK tour. Frontman Leon Macey talked with Paul Castles about how the tour was going, the band’s new live line-up and offered an insight into their cosmic new album On Strange Loops. 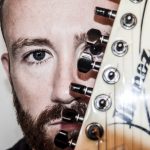 Hey Leon, how’s the tour gone so far? I hear you’ve been a bit unlucky with a couple of car incidents?
LM: Yeah that’s right. We actually started rehearsals for the tour on the Monday and before our bassist Vic even got to rehearsals he had his car broken into and all his gear taken out the back. It had only been parked there for a few minutes and it was the worst possible timing. Fortunately our former singer and bassist Rayner Cross offered to lend us his bass rig which was great of him. We set that up in rehearsal and then suddenly half-an-hour later Vic took a call to say his bass and gear had been found! That was fantastic news but it meant he had to go and retrieve it, then we needed to assemble it in the rehearsal room. So the whole thing meant that first rehearsal was the worst possible prep for the tour.

And what was the other car calamity?
LM: We played Glasgow and then had to drive all the way to Plymouth. Travelling back to the Midlands the following day the clutch decided to go. Fortunately we got recovered with our trailer and the courtesy car we were given had a tow bar so we were able to complete the final few dates, which finish at the Damnation Festival in Leeds this Saturday.

Can you tell us something about the new album, On Strange Loops?
LM: I’m as close to 100% satisfied as possible. I really threw everything at this album, nothing was left unsaid or undone. Attention to detail is way up there. We wanted it to be a progression from our first three albums. With any new record you’re looking for the musicianship to be better and the production to be better, With this record I felt we took a couple of steps forward, not just one. I wanted the songwriting to be more concise, atmosphere more specific with all the conceptual elements lining up. Older fans have told us they’re mad about the album which is fantastic. We’re not playing quite as many new songs on this tour as I had wanted to as I’m not the kind of guy satisfied going on stage less than 100% happy with what we’re doing.

You referred earlier to Rayner as your former singer. His last gig was when you played Incineration Fest in London in May. So why did he up and leave?

LM: Basically the issue was over touring due to his own work commitments. The same thing happened in 2008 when he previously left the band when we started playing long distance shows. This was basically a rerun of that, he just couldn’t commit to touring. The timing was bad as we had gigs booked and I would have loved it if he’d carried on. But once the decision was made it was just about getting on with things and as the band was always 95% mine there was never a question of us winding up. We held auditions to explore the option of a new singer but both logistically and stylistically no-one we saw was suitable. I’ve sung a handful of times with the band in the past and so that became the obvious step to take as I write most of the lyrics as well anyway.

Your first gig as frontman was a nice low key affair, Brutal Assault in the Czech Republic!
LM: Yeah, that’s right, in front of a massive crowd! It was a really good show although the power went completely midway through our first song. The audience stayed with us in the dark for 20 minutes until the power came back on. But it was a great gig.

Can you just complete the current line-up for us.
LM: We’ve always struggled with the live line-up as it’s always difficult when one guy (me!) is writing all parts. The problem is if I don’t drum on a Mithras album people complain. I like drumming and have drummed live about 4 or 5 times. But if there’s one thing for me to do on stage it’s play guitar. I can get someone to play drums like me but not play guitar like me. Julien is our new live drummer although I did all the drumming during the recording of the new album. Things didn’t work out with our previous live drummer. We didn’t want to cancel this run of dates so I made lots of calls to try and get someone in. Eventually Steve Powell (ex Anaal Nathrakh) recommended Julien Helwin who has a lot of live experience (Otargos, Withdrawn). All the guys in the band are really professional. Tom Hyde has been on rhythm guitar with us since 2009 and Vic Lochab joined us on bass this year.

You’ve always been a progressive and challenging group in terms of lyrics, not content with the usual Satanic blood n gore that most death metal bands go in for.
LM: Not really, know. The new album explores a number of scientific journeys which of course is what a Strange Loop is – the concept of which is that you come back to the point you started. I’ve always been interested in subjects like astrophysics and I read a lot of science fiction but I don’t want people thinking the songs all involve mathematical equations! Bands like Morbid Angel are often cited as influences and while Pete Sandoval has always been big influence on my drumming style I’m also a massive Meshuggah fan with their more abstract time changes.

Thanks for talking with Midlands Rocks, Leon – what plans are there for Mithras in the New Year?
LM: Well we’ve got Damnation first in Leeds on Saturday. We’re really looking forward to it – Mithras actually played there in 2009 and we’re back on the same ‘Terrorizer Stage’ this year. Next year hopefully there might be some Euro dates, and maybe a short runs of gigs in the UK, possibly a festival or two. Festivals can get booked up quite earlier but it’s been difficult to sort things like that as we’ve had a lot on our plate with the album release.