Midlands Rocks caught a few spare minutes with Kris Barras at Ramblin’ Man Fair who managed to busy himself with two electric sets and an acoustic session in the VIP tent across the weekend.

Busy weekend for you across all days?

Yes – It’s been non stop so far. Last night went well (playing the pre festival party). Everyone seemed up for it and were singing the songs.

Yeah. We sold a lot more copies than we thought we would and it has had a great reception. We’ve also received  lots of national airplay which has been great. 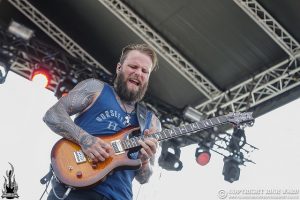 Lucky 13 was a self produced project, which we recorded in my studio and then me and Matt, the keyboard player at the time, we mixed it in his mum’s living room. For The Divine And The Dirty, I actually started recording it before I signed to Mascot and I wanted to work with a producer that was going to help me develop ideas, so that’s what happened. As things developed the band got bigger and bigger. My keyboard player left and we actually got the producer Josiah to join the band.

We’ve seen some of the songs appear in your set quite some time ago. Has road testing the songs helped in shaping the album?

Definitely. We started writing for the album 18 months before, and some songs like ‘Hail Mary’ have been in the set for a year. I always like to do that, and I hope that I’ll be able to put a couple of new ones in for the September tour. It think it really helps to try and bed the songs in before you start recording.

Your next headline tour is in September but before that you’re out in Europe with Supersonic Blues Machine. How did you become involved with that project?

That’s right. It starts in London this coming Wednesday followed by 12 dates around Europe, mainly headlining big blues festivals in Poland, Belgium, Germany, all over the place. We actually got put forward as the support band for the shows and we didn’t realise at the time that their frontman Lance Lopez had decided to leave the band to concentrate on his own solo career. So they were looking for a new frontman and they had a few guys in mind and I got put into the mix and was very fortunate to be chosen.

It’s certainly a great opportunity, and playing with Billy Gibbons too…

Yeah it’s going to be great. They’ve got some great songs and Billy Gibbons is a great guy too. I was out in LA with him recently having a few tequilas.

There seem to be more and more blues based players coming through now. How do you feel you fit in with the scene?

There are plenty of traditional type blues players who are great. There are plenty who churn out the 12 bar blues doing the same old stuff, but there are some great players who are a bit more unique and have something about them. I don’t count myself as a 100% blues guy. I think I’m influenced by the blues, but I prefer to do more song based material, a bit more rocky, southern rock influenced.

So who are your influences?

The main one when I was growing up was always Gary Moore. Unfortunately I never did get to see him play. I moved on to Hendrix and then got into the more shreddy guys like Steve Vai and Joe Satriani so it’s always been quite a wide range of stuff.

You’ve got some more touring lined up in September. Any plans after that?

Yes. We’ve got he headline tour in September, then some dates with Joanne Shaw Taylor. We’ve also got some dates with Gun coming up. We’ve then got a couple of weeks put aside around Christmas where we’re hoping to get in the studio. It’s all non stop. That’s the way to do it.

Catch Kris on tour throughout the UK in September 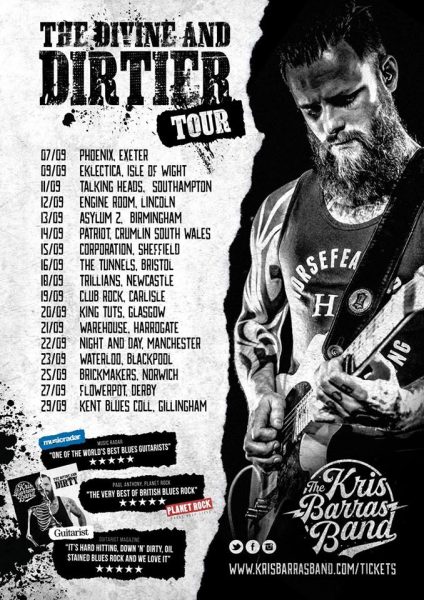