Energy and spirit are connected with the instruments and the voice…

Formed in 2006, German black metal band Kerker has released only two demos, Each Night While You Sleep… in 2006 and Naechtliches Imperium Rehearsal MC in 2007. Afetr a very long silence, the band have recently released their first album, A Dime for the Bleak Faces, on 1 Janury 2015 through Nihilistische Klangkunst.

Drummer/ vocalist Neideck and guitarist Arges took time out to speak to MR’s Jason Guest about a number of topics including the album, its creation and long-delayed delivery, their lyrical themes, why piano, in its emotive diversity, is the perfect vehicle for black metal, and – perplexingly – why the lyrics and the sound of the album are far from what they wanted…

Thanks for taking time out for this interview and congratulations on A Dime For The Bleak Faces. From what I can find online about the band, this is Kerker’s first release since 2007. Is this correct? If so, why has it taken so long for the band to release a full length album?

Neideck: Yes, that’s correct. It has taken so long, because Arges and me weren’t able to do a new album for a long time. Sometimes we’ve spoken about Kerker, but nothing happened. I must say, that it wasn’t easy for me to find any time for making music beside work, so I was very happy to catch some space beside this to go on with my project Trauer at least. Another problem was my move six years ago. In the past Arges and me lived in the same village and it was very easy to jam and make music. Nowadays we’re split to 200 miles, so we can not spend the same amounts of time like before.

Neideck: Mostly the lyrics are of a very descriptive nature. It’s like drawing a picture with your words. “Dethronement of old kings” for example is some kind of a description of a dance macabre, you know, from the middle age paintings. The whole album is meant as a “memento mori”, catching the ferryman as guiding figure. So inspiration can be found in literature, history or in ancient mythology.

Can you tell us about the album title, what it means and how it relates to the music?

Neideck: Save a dime. Maybe you’ll need it at the end of your life. Metaphorically speaking, it’s the thought of paying for your sins. No matter if it’s a divine authority or a concrete conclusion of action and reaction. It’s some kind of a philosophical reflection: Do all of our negative actions lead to a negative reaction? This is a question, which cannot be answered. For me it was just an interesting intellectual game and I tried to put it in some lyrics. It didn’t work very well, so the lyrics were not published in the booklet. Now the second part of the question: The lyrics don’t relate to the music. It wouldn’t matter if we were singing about Satanism, the spirit of nature or whatever. The music wouldn’t change. I see black metal always based on music. Very often the lyrics don’t play a role. All the energy and the spirit are connected with the instruments and the voice. The topic doesn’t matter, just let it flow.

Neideck: No, not really. We just wanted to record the instruments as good as we can. The goal was a brilliant and powerful sound. I would say we didn’t get it… But it’s okay. Next time.

In the track ‘Prague’, the piano plays a significant role. What do you like about this instrument? And why use it for black metal?

Neideck: I like the piano very much, because it has a great spectrum of emotions. It can also sound very happy and joyful, but also dark and depressed. Why we’ve used it for black metal? If I defined black metal as a non-piano music, I wouldn’t do black metal. Every instrument is possible, if you can handle it. I didn’t want to constrain my musical ideas through using just a limited range of instruments. 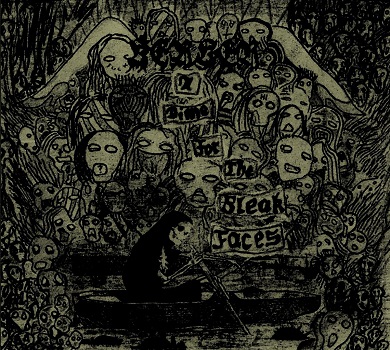 The artwork and design was by bassist Arges. Can you tell us about the artwork, its design and what it represents?

Arges: I personally prefer the handmade and collage style. For me, the cover and the artwork in general play an important role. It’s the first thing you notice and if you like the mood and the atmosphere of the pictures, you may decide to listen to that album in order to find something similar in sound. So that was the basic idea behind the artwork. We wanted to have a visual representation of our music. That meant that it had to be a bit harsh and dirty.

The album is being released through Nihilistische Klangkunst in a limited number. Why choose to work with this label?

Neideck: The label chose us. He’d listened to our tape from 2007 and started asking us for new material at an interval of three month.

According to the promo material, the music and lyrics are written by Neideck and Arges. How do you work together to create music? Does one of you write lyrics while the other writes the music for example?

Arges: The bulk of work has been done by Neideck. I only contributed some riffs and the lyrics for one of the older songs. It turned out to be the best that each of us has his own field. So the lyrics are mainly by Neideck and I concentrate on design and artwork. Regarding the music itself, we are both working on new material at the moment. We meet from time to time to jam and to arrange the songs.

Neideck: Not in general. The only direction is, to do negative and dark music. I like the intensity and energy in black metal, but I don’t care of a strict concept.

To get an idea of the band’s history, can you tell us about how Kerker formed and what it was that drew you together to make music?

Arges: Kerker formed in 2006. We were both members of Todeskult. There was this new wave of DSBM bands at that time and with Todeskult we fell exactly into that category. Back then, we just wanted to do something else beside that. So, our intention was to go in another direction with Kerker, more back to 90s black metal. Harsh and fast but with atmospheric parts. From 2006 to 2007 we rehearsed regularly and recorded two demos. However, it took until 2012 to record our first full length CD but Kerker was never dead. We occasionally worked on new material and finally decided to record A Dime For The Bleak Faces, five completely new tracks and two newly arranged and recorded older tracks from the demos. 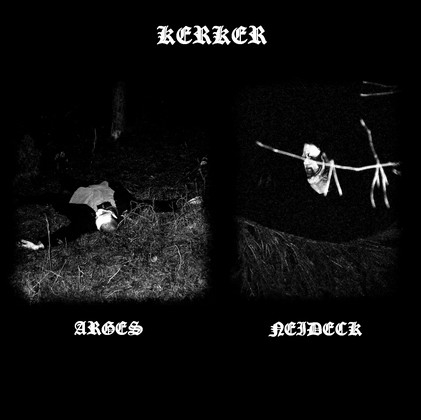 Arges: Our very first rehearsals sounded as if recorded in a cave or a dungeon. To be honest, it was horrible. But it had a certain oppressive atmosphere and Kerker was the most appropriate term to describe that.

Musically speaking, how has the band developed since its formation?

Neideck: Since I stopped playing drums and Dominion entered the place behind the drum kit our percussion is much better.

What does the future hold for Kerker? Early days I know as the album is about to be released but is there more music in the pipeline?

Neideck: At the time we are working on a three track mini CD.

Neideck: No, and I don’t think, that we will play live in the future.

Thanks again for taking time out for this interview.