“There hasn’t been a review of ‘Eternity’ that doesnt refer to our debut.”
, so it shows you how important it was.”

Hi Ken, It’s been a long time since Alien’s previous album ‘Dark Eyes’ but I’m loving ‘Eternity’ and it was definitely worth the wait! It does sound more like early Alien in its approach and style than your previous album; was this the intention when you were song writing for this album?

Thanks, Woody. Well, this is the original line-up back together, so no wonder that’s what it sounds like! But, yes, it was our intention to pick up where we left off, as far as type of songs and style of music – that, along with the good production of today.

It’s been 26 years since we made that album (s/t, 1988), but we’ve gotten enough encouragement from fans of the original line-up to be sure it was the right thing to do and stay true to what we did best back then.

How long have you been working on ‘Eternity’ and has the album turned out as well as you hoped?

We wrote mainly during last spring, finally having decided to make the new album. Then it was writing and arranging together during a couple of production rehearsals, up until August 1st, when we started recordings. Sessions were spread out a bit over the rest of the year, and final mixes were done early this year. Sure, I’m happy with it… both song wise and production wise.

Can you talk to us about a few of the songs on the album that fans would like to hear?

Well, the songs might have different meanings to us members; it depends who you ask. Most songs were initially written by keyboard player Jimmy Wandroph, the chord progressions that is… Then all members are responsible for their parts, Jim trying out his vocal melodies, etc, before we arranged and completed the songs together. Jim and I wrote the lyrics but we also re-connected with Pam Barlow and Janet Morrison Minto, our co-writers from the 1st album – who wrote lyrics based on the feel Jim was aiming for with the vocals. That collaboration turned out great, I have to say!

‘In Love We Trust’ was the first song we tried out on an audience, actually at Firefest last fall. We felt it would represent the overall sound of the album. And it was also the first single prior to the album.

On ‘Summer Of Love’  I dig the positive, yet melancholic touch on this. We were thinking youth, nostalgia and hope… and Pam & Janet’s lyrics just nailed it!

‘Wildheart’ has a lot of the classic Alien sound, as far as harmonies and arrangements go. We thought it a cool thing to keep those old signature elements.

‘Liar, Liar’ was the very first song written for the album, and also the first one recorded.

‘Look At Us Now’ reflects on being an artist at heart; us getting back together, etc. It’s got a nice span in dynamics this one. I love the solo/theme part, which came up just jamming at rehearsals.

‘Burning Heart’ is a tribute to enthusiasts/heroes who’ve selflessly stood up for others and ideals.

While ‘In Truth’ was actually written to be performed un-adorned; sort of like how ‘Mirror’ was in closing the first album. The lyrics are based on a true story.

Thanks, you mentioned playing Firefest Festival… you’ve played twice in recent years; what was that experience like?

It’s an awesome experience; to just meet real fans from so many ‘corners of the world’ teaming up for this event. Such a dedicated AOR crowd! I’m really lucky to be going there (with Touch) for the forthcoming ‘final fling’, as well.

Are there any plans for any upcoming live shows? Especially here in the UK on the back of Firefest’s success?

Absolutely; we want to bring these new songs to the stage right now! We’ll do some outdoor shows in Sweden this summer; the ‘Sabaton Open Air’ for instance, and some club gigs as well. We’ll definitely look for ways to come to the UK. We’re invited to participate in the ‘Baltic Song Contest’ in July, and that’s filmed for a massive broadcast in the Baltic countries, so hopefully you can get to see that somehow?

Most AOR fans agree that your debut album is one of the all-time greats. How does it feel to know one of your albums is so well loved and enjoyed?

Feels great, of course. It’s always stayed close to our hearts and meant a lot for our individual continuing careers. We were reminded last year that people still care for it, when EMI released the ‘25th Anniversary Edition’ double album; that sold out! Plus there was another re-issue of the Scandinavian Edition (licensed by a Greek label) prior to that… and that sold out as well. I don’t think there has been a single review of ‘Eternity’ that does not refer to the 1988 debut, so it shows you how important it was.

Alien seem more active lately and rejuvenated certainly; does this mean we should expect further albums or was this intended as a farewell piece for your loyal fans?

Neither, really. I mean, we have this new album out now, and we’re much more responsible and involved in all parts of this product than how it used to be due to the whole music business situation, but you can never tell. The great response and reviews we’re getting though, make it so much easier and fun to invest all the effort and means that it takes though, I can assure you.

We absolutely didn’t think of it as a farewell, no! It would probably have affected both the writing and production of the album, if you had that aspect in the back of your mind? Let’s see what happens next…

Thanks for your time Ken, is there anything else you would like to add or say to Midlands Rocks readers?

Hope you enjoy our new ‘Eternity’ album and hopefully we’ll see you on tour somewhere soon! And thanks for supporting the classic/melodic rock/aor scene… 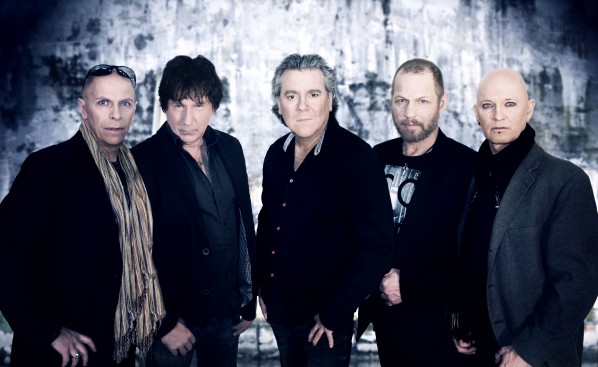