Karyn Crisis’ Gospel Of The Witches is the brainchild of two visionaries: Karyn Crisis (ex-Crisis) and Davide Tiso (Ephel Duath, Howling Sycamore). Their debut Salem’s Wounds was released by Century Media records with worldwide critical acclaim in 2015 (reviewed here), and now it’s time for a brand new album. Titled Covenant and featuring Fabian Vestod (Skinlab) on drums, it offers 12 songs of the finest Occult Metal – from evil heaviness to ambient passages invoking very ancient concepts and vibrations of the realm of the Goddesses and those who celebrate their magic on earth. Here, MR’s Jason Guest talks with Karyn Crisis about the new album, the creative process, recording, spirit guides and goddesses, and the ongoing demonization of the witch…

To begin, what kind of progression does the album mean for Gospel of the Witches?

Karyn: This is charged music, ritualistic, and it is made through the process of channelling. So, in this type of creative relationship, there are developments, movements, changes… and this album musically travels to some new sonic places: heart-breaking melodies, lifted song structures that remind me of ancient temples among the stars, also the sensations of rural folk digging their hands in the dirt near fires to celebrate their rituals. The last album was about magic involving masculine and feminine energies and their sacred marriage, and the type of rituals you would find in ancient temples.

Covenant is about the realm of the feminine divinities, and their reaching towards people in daily life as they did in Italy: pulling people into astral travel and dreamy places to be given secret knowledge. A “covenant” is a type of devotion, an agreement with a larger force. I think that describes the relationship Davide and I have with the divinities involved with this album.

Can you tell us about the experience of creating the material for Covenant? Was the process similar to that of creating Salem’s Wounds?

Karyn: I’d say Davide and I have a very unusual way of making music. He is an incredible composer: he feels the muse, focuses his mind, and wow! Suddenly an entire universe emerges from his guitars. He has his own studio, so he’s able to compose and record very rapidly when he feels the energy calling. I’ve never seen someone work so decidedly and so magically at the same time. He has a way of creating intuitively but at the same time mastering form and tangibility.

I’m almost the opposite: I am not able to create if the energy isn’t flowing. Sometimes that flow is my fault, but more often than not it’s about my spirit guides focusing me, like a laser pointer, in a direction. Often their ideas and focus are different from mine, so it’s easier for me to follow their guidance. This can also be frustrating.

So, I wait, surrender, and receive… and when I feel guided to focus, then suddenly the songs arrive. I just have to listen to what they are telling me to sing about or how to sing them.

Davide Tiso was again responsible for the compositions. How has your musical relationship evolved since Salem’s Wounds? And how has it manifest in Covenant?

Karyn: Our musical relationship is more separate and more intimate than before. We’ve learned that we each have very different ways of creating, and that we each need to be in our proper inner environment to do this. At the same time, we are both channelers, and so we are connected by a higher power, you can say…guided by the realm of goddesses. So we are always on the same page creatively, vibe wise, atmosphere-wise, but we have very different ways of creating. It’s all about finding a way into what some people call the “void,” or the “field”, where you allow yourself to be a vessel for something more powerful, more wise, more loving and more knowledgeable than yourself. If you can do this, you can find yourself at an interesting crossroads between a most ancient point in time and a most modern future time. For us it’s about serving the work, which is bigger than what we are individually. It’s like the lyrics to “Omphalos,” (from Salem’s Wounds) which are about becoming nothing… so that you can become everything.

Skinlab’s Fabian Vestod plays drums on this album. What drew you to him? And what did he bring to the writing and recording?

I thought you’d want to hear from his perspective:

Fabian: Drums for the album Covenant are very different compared to the previous album “Salem’s Wounds.” It all came from the way the guitars were written. While in the first chapter the atmosphere was romantic and nocturnal, invoking a divine force, this time the awakening was into fire and blood where the force descended into battle. The drumming recalls a sense of marching through fire, pounding like an ancient ritual with obsessive and primitive patterns. This also is why the drum sounds (tones) for this record were chosen to be less produced and more natural, organic, and alive.

I see that you worked with Jamie King again to produce and mix the album. Why choose to work with him? And what did he bring to the album?

Karyn: I absolutely love working with Jamie. Years ago, when Davie and I were ready to record Salem’s Wounds, it was Davide who suggested him as a producer based on the work he’s done for Between The Buried And Me…and I thought, this is it! This is the man who can navigate Davide’s many guitar layers in ways I was sure other producers would be lost. Working with Jamie on vocals is a dream.  I feel comfortable and the vocal booth has such a great sound that we end up working really quickly together and the sessions end early. All that stress worrying about studio and it’s over before I even know it! He’s got a great work ethic and involves us in the mixes, I just can’t say enough great things. A real pro.

As well as being involved in music, you are also a spiritual medium and healer as well as an artist. How do you choose which medium is suited to your emotional and creative expression?

Karyn: I don’t choose the medium, the medium chooses me. That is both the beauty and frustration of it! When my spirit guides decide it’s time for me to write a book, poof! Suddenly I’m a writer. When they decide it’s time to make the album, suddenly I’m in voraciously the flow and everything I need to do that work also flows to me, in the form of ideas, resources, connections, etc. This enables me to accomplish a lot in a short amount of time. 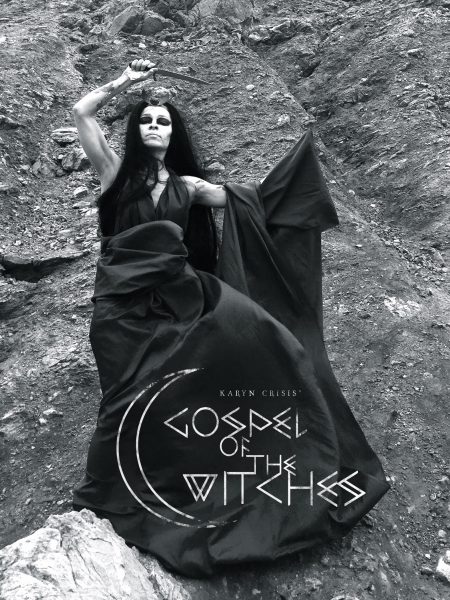 I read in an interview from 2017 that you work with spirit guides and goddesses that have appeared to you at various times and that your paintings are given form clairvoyantly, complete with details and colour. Do you have the same kind of experience when writing music for Gospel of the Witches?

Karyn: I have a similar experience, yes. Basically, I listen for the songs to sing themselves to me. Usually, my process is that I listen to the songs as just guitars and drums over and over. It’s not difficult for me because I love the atmospheres so much. Then, at a later time, perhaps while I’m walking somewhere, I’ll hear the songs play in my mind and I’ll also hear some vocal melodies. I do my best to remember them if they sing to me this way. Later, when I’m rehearsing, I try to fit those melodies into the songs, where, instead of being something I hear, they start to take shapes. For example, when I was working out vocal lines for Benevento, they looked like serpents, green and yellow, climbing up tree branches. So, I made sure my vocals went up and curved in those ways. Those images ended up being the softer melodies of that song. So, I listen and I watch the songs tell me how to sing them.

In 2017, you released your book Italy’s Witches and Medicine Women Volume 1 (here). What have the responses been like to your book? And any plans for further volumes?

Karyn: The book has been really wonderful on many levels. I’ve learned (and continue to) a lot and it’s changed my life in unexpected ways. It’s quite charged- many people feel the voices of spirits of women and men who were burned in the inquisition through passages in the book, and people also feel connected to the people I interviewed in the book. It’s also given many people a validation they’ve been looking for on their path. It’s really a book about feminine traditions: whether men, women or non-binary gendered people are using them.

It’s work that continues, there are more stories to tell.  It’s not a path I chose for myself, I never intended to write a book at all…and it’s fascinating that there’s so much to history that survives through oral traditions and hasn’t been written down before, as is the case with much of rural Italian traditions.

We live in increasingly secular times, with science and reason making continued challenges to religion and the occult. Why is it that despite such criticisms that the image of the witch remains a very potent one? Is it gender related?

Karyn: Because the world sees life through masculine eyes. If societies were to embrace the witch, and the women behind the myth, they’d have a lot of apologizing to do… and rearranging of how we live life.

Society has been set up this way since those ancient times when male warring tribes invaded communities and reorganized them, and the ensuing control of knowledge, resources, and power.

Think of it this way:  Every human being who has ever been born and lived on this planet was birthed through the body of a woman, and her body also nurtured that embryo until it became an independent baby after birth… and her body continued to be able to feed that human being. Men have very little to do with that. This is why the universe was first celebrated as a feminine force, because of the power of the womb. It’s an enormous power: it’s divinity in feminine flesh. The feminine life force is what all religions are built to worship, but they do it through the story of a powerful and punishing male god who is just a synthetic version of the goddess.

Witches are just women who’ve always been connected to this force and higher knowledge. The word witch and the scary tales that go along with it were created to turn people away from that feminine power for socio-economic reasons that started far back with the advent of documented paganism, where we already see the feminine representation of divinity pushed out of the story to make room for the gods. It continued as the church began to create schools for male doctors only (and tried to put midwives out of business) and tried to turn people away from the accessible healing cures of uneducated women who were performing miracles.

Along with them, non-binary genders were demonized… this was the only way to establish male-god-only religions that didn’t include the formerly honoured feminine divinity: to paint an evil picture of her and her counterpart on earth. And as we know, these religions include social control.

Again, thank you very much for taking time out for this interview. Do you have any closing words for our readers?

Karyn: We are rehearsing, with plans to go live. Thanks for your time and thanks for listening! 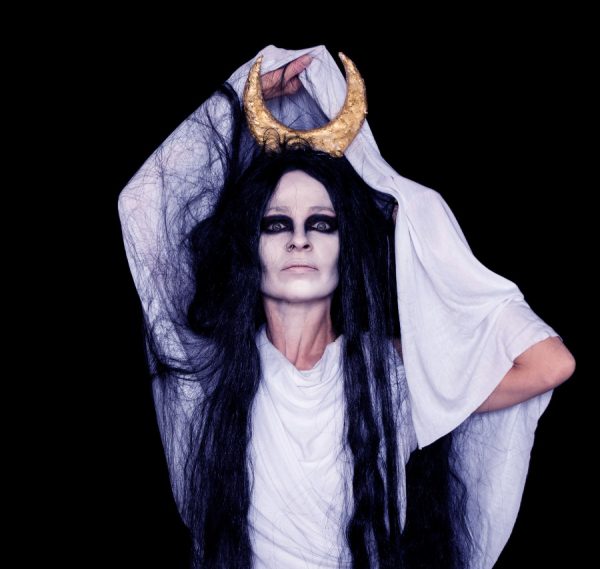