You’ll find a mixture of classical and modern elements, the trademarks of our band…

5 May 2015 saw the release of Kamelot’s eleventh studio album, Haven. Described by the band as an album with “an undertone of a world going insane,” it is a dark, melancholic and an uplifting experience. Here, MR’s Paul Castles talks to Oliver Palotai about the album, the guest musicians, touring, and what it’s like to work with a magician…

Thanks for taking time out for this interview. You’ve a new album out called Haven. What can the fans expect from it?

Well, like with our previous albums we never deliver the same album over and over. Our fans know we’re prone to experiment, and so does Haven contain many unheard elements. Especially from my side, as keyboarder and orchestrator, I combine natural instruments with synthesizer and groove elements, which gives almost infinite possibilities to change the sound.

Does the album have any particular theme either musically or lyrically?

Haven is not a concept album, unlike Silverthorn. But of course it is distinctively Kamelot.

Is Haven very different from some of your previous material?

We undergo a constant musical evolution, so if you compare Haven to early albums like Epica or The Fourth Legacy, a lot has happened. Nevertheless, you’ll find a mixture out of classical and modern elements, somethings which is surely a trademark of our band.

Musically this record has a massive sound full of emotion. How influential was producer Sascha Paeth in helping you achieve your goals?

Sascha is almost like a sixth band member. He is involved in all stages of the production, except the first round of songwriting. Thomas Youngblood and I wrote the basic structure of the songs in stage 1 of the production, after we’re in a constant exchange with Sascha. 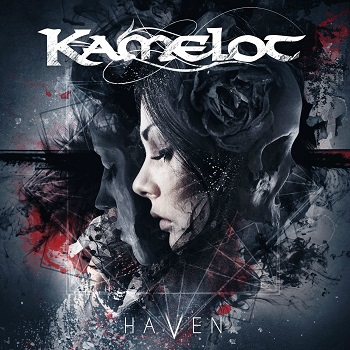 You’ve got some quite illustrious names helping you out on this record, notably Alissa White-Gluz from Arch Enemy and Charlotte Wessels of Delain. They are busy ladies with their own band connitments. Was it easy to get them involved? And does working with other artists bring a new dimension to the project?

We know them all personally from tours and festivals in the past. Alissa was with us on tour before she became singer of Arch Enemy, Delain were supporting Kamelot a couple of times, and we know Troy – the third guest – from the long US Nightwish tour 2013. So, while writing the songs, certain parts are ideal for guest appearances, and then you turn preferably to friends in the scene.

Troy Donockley of Nightwish was also involved. Is he someone you know well?

He’s a very unique and relaxed person, and an accomplished magician as well, by the way. We hang out a lot during the Nightwish tour one and a half years ago and he was up for playing on ‘Under Grey Skies’ immediately.

You’re on the road at present in the US with Dragonforce. How has it gone so far and are Dragonforce guys you know well?

We had a minor incident at the beginning, when we cancelled the Baltimore show due to the riots three blocks away. But we skipped our off day and returned three days later. Besides that it is one of the best tours I’ve done in 15 years, outstanding performances and super-energetic and positive crowds every night. Love it!

Have you got to grips with performing the new material live yet?

Currently we added three new songs to the set list: ‘Revolution’, ‘Insomnia’ and ‘Veil Of Elysium’. You never know how songs turn out live. Some can be outstanding on a record but they somehow don’t work on stage. Those three, though, have been great and people loved it. We practiced more new songs and maybe we will add them to the list. The album has just been released and we didn’t want to play too many still unknown songs.

Will there be a Euro tour later in the year and will it include UK dates?

We just played two special UK dates in March. The Euro tour starts in September but we won’t return to the UK just yet. But there will be a second round next year.

Well, stay open for new music, new directions and experiments. I always want to stay a student in many things all my life, and that’s the best thing I can recommend to be.