What’s that coming over the hill…

Paul Castles catches up with Monsterworks singer Jon and discovers exactly what the ‘Black Swan’ theory is that they’ve built their new album around, released on June 24 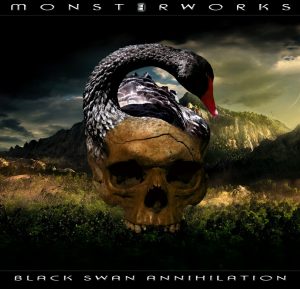 MR: Hi guys, you’ve a new album out in Black Swan Annihilation – what can you tell us about it?
Where do we start? Ha. The title alludes to a loose concept based on the idea of mankind being wiped out, or at least taken to the brink of extinction. Fun times!

MR: There’s a theme to the album built around the concept of ‘Black Swan’ events – just shed a little light on this for us?
‘Black Swan’ events change history for better or worse. The term was coined to specifically refer to an unforeseen circumstance, i.e. that no one saw coming, but yet it has a profound impact on civilisation. In the case of the album’s story arc the ‘Black Swan’ is an annihilation event. However, due to its very nature, i.e. being unpredictable, we don’t go too much into detail about what actually happens, instead dealing with the kinds of thoughts and issues faced before and after the event itself.

MR: How much time did you spend working on the new material?
The demos would have been completed sometime around mid-to-late 2014. Then we booked studio time (for April 2015) and the band got stuck in learning it and adding their own touches. I do not tend to write lyrics for an album until there is a deadline to work to (i.e. the studio dates) but the music is put together over many iterations of demos. A lot of the guitar lead work is done in home studios, after the main sessions. In total the writing and prep time is about four months. Post-production took a lot longer than usual due to various unpredictable delays (‘Black Swan’ delays!) and stretched over about a year from May 2015 right up until mastering was completed.

MR: You have that combination of near death metal vocals one minute and then smooth melancholic harmonies the next – does that differing in styles make it harder for people to pin a label on you?
I think so. It tends to be a common observation in reviews that we are stylistically “all over the place”. But that is only from critics that have not heard Monsterworks before. To us it flows naturally and I swear it is not contrived just to crowbar in as many different styles as we can for the sake of it. I just genuinely like different kinds of metal and incorporating bits of most of it, so long as it sounds good.

MR: Just tell us how the recording went at Rockfield Studios in Wales?
We really enjoyed it there. It’s on a farm and we stayed in self-catering accommodation. Dio recorded his last album, The Devil You Know, at Rockfield with Iommi/Butler/Appice so it has a fair bit of nostalgia going for it. Our engineer, Tim Lewis, had a great work ethic. I don’t know if he knew what to make of us musically, but he got a good sound, so that’s all that matters! We have never tended to work with people that specialise in metal, which is just as well because I don’t like the production choices of a lot of modern bands, even if the music is cool. If your kick drum sounds like a manic typewriter my interest will wain within a few minutes.

MR: And Damian Herring from Horrendous had an input too?
It was mastered by Damian. I actually mixed it mostly myself but Damian was kind enough to give some feedback on relative mixing levels so the final master was as good as it could be. Unsurprisingly, I contacted Damian because he was getting great reviews on the production of the last few Horrendous albums and I wanted to take advantage of his dynamic mastering skills. Funnily enough I wouldn’t say we have the same tastes in instrument sounds per se but we do see eye-to-eye on mastering techniques. I would definitely work with him again on at least the mastering side and as a credible second opinion on mixing.

MR: Was the approach with Black Swan Annihilation in any way different from previous Monsterworks recordings?
This was the first time in 10 years we had recorded in a different studio. Everything we have done since 2005 was recorded at Earth Terminal Studios in Hampshire. That is nine albums I think. However, it closed down so I started looking for alternatives which is when the Rockfield option popped up. It was basically a nostalgia holiday and recording session rolled into one.However, while the venue was different the approach was actually pretty similar to recording at Earth Terminal. As before, we tracked to 2-inch tape live with drums, bass and guitar all at once and then do over-dubs as necessary before extra guitars, vocals etc. are recorded in the digital domain. An interesting side note is that this was the first time we tuned to drop B at 432Hz (instead of the more usual 440Hz). Marcus and I play 6-string guitars, and Hugo a 4-string bass, but with fairly heavy gauge strings.

MR: Why did you decide to make the album a free download?
There will inevitably be a leak as soon as it goes up for sale on Bandcamp so I just figured “let’s cut out the middle man”. The download and promo copy has two less tracks than the physical CD/DVD with surround mixes so people that actually want to support us get a little extra. 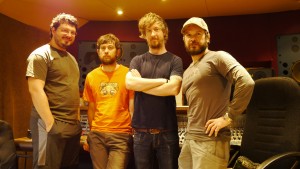 MR: Is there any sense of frustration in having to give away an album you’ve worked hard to make – or is that simply a sad consequence for a lot of bands thesedays?
I barely think about it anymore. Luckily for me we are not a band that does this for a living or we would have starved to death long ago. Sure we worked hard to make it, but there are thousands of good bands out there so I just prefer to lower the barrier to finding us and enjoying the music. Make no mistake though, I react against any attitudes that devalue music. Illegal downloading is morally corrupt and that fact is inarguable as far as I am concerned. Lars was right. A lot of people think Lars is a dick, but he is a righteous dick!

MR: Are any of the band members currently involved with any other significant musical ventures away from Monsterworks?
Hilariously, or awfully, I am not even sure at the moment. James and Hugo have their fingers embedded deeply into many musical pies. We don’t often talk about it. Monsterworks is their metal project so when we get together we talk exclusively metal.

MR: Are there any tour plans to promote the new album?
None. It has been over a year since we played any gigs. It just tends to be too much of a logistical challenge to pull off. Put it this way, it is basically as easy for us to practice for a new album as it is for a live set of older songs. Forced to choose, I go with making new material. Don’t get me wrong, I really like playing live, but there is only a limited amount of time to dedicate to the band for all of us. That said, if we get a good offer we’ll always consider it and, in fact, be inclined to go for it if everyone is available. I actually live in Milton Keynes (the rest of the band is in London) so we are creeping toward the Midlands. Hugo and Marcus went to Uni in Birmingham.

MR: What does the rest of the year have in store for Monsterworks?
We are working on two new albums simultaneously! Both have been recorded, again at Rockfield, but need a lot of extra work before they are close to taking a final shape. Meanwhile, I chip away at new material all the time. I sit and play guitar in my lunch hour at work; recording demos to programmed drums. It’s a hard life but someone has to do it!