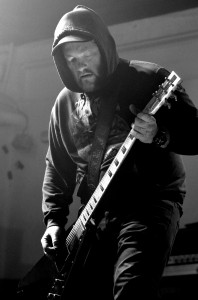 While the US often finds itself caught in the crossfire of some meteorological mayhem, that was nothing compared to the aural attack it sustained during a recent visit from battle-hardened warriors Conan. Paul Castles got the lowdown on the cross Atlantic action – and all other things Conan – from the band’s commander in chief Jon Davis, just prior to their recent pummeling performance at The Oobleck in Birmingham.

“The club shows in the States are really cool too. We played this little small café in Tempe, Arizona. The night before we got a call saying Eyehategod’s show in Tempe had been cancelled and could they come and join us! I was like – ‘are you kiddin me?’ Of course they can! So they came and played the show and we had a few drinks and hung out with them. It was a packed café, insane but such fun.”