“Today, going to John Bonham’s grave, it was life changing, it was incredible to be able to do that.”

With the imminent release of Black Stone Cherry’s fourth album, the band came to the UK for the Southern Hospitality Tour, a few very special dates that sold out in 45 minutes. Drummer John Fred Young spoke to Paul Davis of Midlands Rocks before their show at the Wulfrun.

So, tell us about the idea behind the Southern Hospitality Tour?

We were sitting around at home, thinking about how to make this special. A bunch of people have been wanting us to come back because of Download. I think it’s cool, it is very different, answering questions from people after 3 or 4 rock songs, bashing your brains out. Stopping that momentum, doing question and answer. It’s fun, you never know what they’re gonna ask and you never know what’s gonna happen. It’s the first time we’ve done anything like this, so we’re brand new to the idea of it.

Man, it’s been awesome. Last night in London was killer. Tonight, obviously it’s a great room here, we’ve never played here before. Actually, the only place on this tour that we played before is Barrowlands.

You’ve been coming to the UK for a few years now but you haven’t made it to Wolverhampton before?

It’s a nice place, actually got to see a lot of the countryside today. A buddy of mine lives nearby in Stourbridge, we went out, had some beer. We went to visit John Bonham’s grave today.

Why did you choose the UK for these special shows?

There ain’t nowhere else better to do them, man. We’ve had this massive connection here since we started coming in 2007. We were in an airport shuttle bus and playing 100 capacity clubs back then. Getting to be able to play, then come back. The fans here are incredible.

You’ve been known to wear a Union Flag t-shirt, is that to do with your love for the UK?

What happened was, we were doing photos for the second record. My clothes had been washed at home but something was sour in my bag, nasty. All my t-shirts were, like, funky. Our tour manager had a Union flag shirt and I was like ‘Joe, I’ve got to wear this’ and he was like ‘Dude, that’s my shirt’. So, I wore it, I didn’t wear it to do the ‘look at me’ thing, we’re happening in the UK now. But when I did see it in his bag, I thought yeah man, those people that support us so much in England and the rest of the UK, they’ll appreciate that.

The profile of Black Stone Cherry has been rising with every album release, to the point where you headlined second stage at Download last year. That must have been a massive thrill for the band?

Insane. Yes, it was an insane show. I remember our management sent us an email in January 2013 saying there’s an offer to headline Download but we don’t think you should do it. I got to that point in the email, called them and said ‘here’s the deal, we’re doing the show, book it!’

We flew in and I didn’t sleep a wink on the plane. I was so tired. We got over there to the stage, I lay down in our trailer. We had eleven guys laying on the floor in this trailer. It was crazy. That show was probably one of the best shows we’ve played in our lives, it was incredible.

One of the best shows ever yet your management didn’t want you to play it?

Do you think we could see Black Stone Cherry headlining mainstage at Download in the not too distant future?

How have these intimate shows compared to playing in front of that massive crowd at Donington?

The new album Magic Mountain is released 6th May. Tell us what your fans can expect this time around?

Making this record we had an open mind, we’re gonna make the best songs we can. We’re not gonna get in the studio and have a producer try to make us, you know, cut, paste, glue. The last record, I love it dude, there’s nothing wrong with it, I love it to death. But our label guy at the time wanted us to make a record that was accessible for radio listeners in America, radio is the big deal over there.

You see, we built over here off of our live shows and then radio started to come along. We could never get radio to respond to us like we wanted to. So when the third record came around, we wrote for a year, like 58 songs, that’s a lot. We made friends with other songwriters in Nashville and other parts of the country. With this record there’s been a shift in the label and we were allowed to be left alone to create Black Stone Cherry.

Our producer Joe Barresi, he was great, so instrumental in allowing us to be ourselves. He came down to our farm with us, he got it man. All these vintage guitar pedals, stuff you can’t even find anymore. The songs, they’re wild, free spirited, American rock and roll lyrics. I think our fans will appreciate it too. We didn’t want to make a record that will get us ‘5 minute fans’. We have our fans, they love us, we love them. We’re gonna make sure that they’re happy.

You mentioned that you built over here first, it’s something that happens a lot with American bands.

Well, Kings Of Leon, they were getting like 5 people at Exit/In Nashville and they come over here and play Reading Festival. I don’t know those guys personally, but they’ve had the same scenario.

The first song from the new album ‘Me And Mary Jane’ is out there now on Youtube. A good reaction so far?

I think so, yeah. We were opening with it, we didn’t last night. It’s such a heavy song when it kicks in, but it’s more of a jam heavy song. We’re opening with Rain Wizard, then Mary Jane. It’s cool man, I love Mary Jane, from the cowbell to the lyrics, the bass, the drums, it’s a good party, summertime song.

On a more personal level, as a drummer, who has inspired and influenced you?

Oh, absolutely my Uncle Fred, he turned me on to everyone from John Bonham to Ginger Baker, Mitch Mitchell, Ian Paice, Tommy Aldridge. All the greats, even from back in the day, Joe Morello, Gene Krupa, Buddy Rich.

Today, going to John Bonham’s grave, it was life changing, it was incredible to be able to do that. I actually have a picture of his tombstone on my wall. Today, it was surreal, I didn’t know the guy, I’ve met Jason, he’s great. This guy inspired so many people. Not just drummers, but musicians. Dude, if you ask a bass player who is the baddest ass rock and roll drummer of all time, if you ask the guitar player , ask the singer, keyboard player, you know who they’re gonna say. There’s guys who’ll say it’s Ian Paice, it’s Ginger Baker. It’s John Bonham, dude. Today was incredible.

After tonight, a few European dates?

Then more shows in the U.S.?

Yeah, we go out with Seether and Skindred, then probably some European festivals and back in the UK in the fall.

Is that going to be arenas?

No, thank you, I appreciate it man. 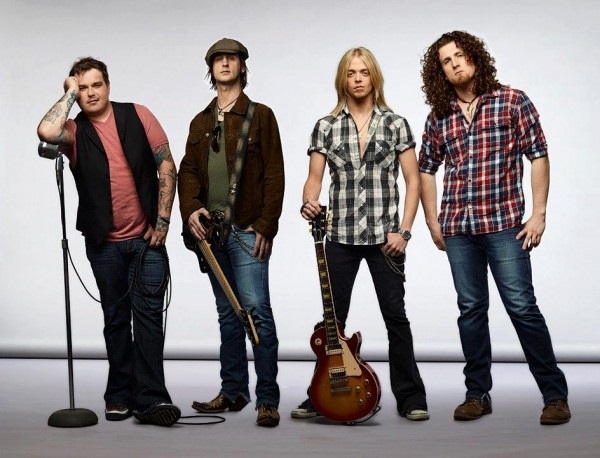