It sounds more dirty and genuine.

With new album Obliteration set to arrive on 15 May 2015, guitarist Jimmy Lundqvist of Sweden’s Entrails talks to MR’s Paul Castles about the new album, recording it at his own studio, the band’s love of pummelling old skool death metal, live performance, and what they have planned for the rest of 2015…

Hi Jimmy. Thanks for your time with this Q&A. All Entrails fans are looking forward to the new album on May 15. Does it live up to its title – Obliteration?

Hello there. Yep, there are a lot of expectations for this new opus Obliteration. And oh yes its sure do. This is one of the best albums so far if I have to say so myself. I went back to a more basic and simple song writing with more solid riffing so the result is more driven and raw, and by that it’s more the style we think that the true old school DM should have been. We don’t do anything modern or new thinking and that’s the whole idea. The passion for the past is so strong that it will never be changed as long as I do the music.

The new single ‘Beyond the Flesh’ is pummelling old skool death metal with some furious rhythms as we’ve come to expect with Entrails. Does this album differ significantly from your 2013 release Raging Death?

Yeah. It’s more driven and a bit more simplified riffing and song writing. Though it’s a perfect mix between all albums that’s been done so far I guess. It feels good when listening to the songs and I hope it shall be as good as the big seller tomb awaits album. And we have also left the triggered drums and now have the real deal instead. More dynamic sound and with high volume it will sure as hell test your speakers.

Was there a determination to achieve a really raw old skool death metal sound?

That’s also sort of the main idea with Entrails. To continue have this Hm2-based guitars and the fat bass line over the mix. This sound just disappeared in the early 90´s but was the main reason Swedish DM got so famous. And as I wrote in previous question the drums are natural this time and will give the sound a boost and the dynamic it deserve. And to me it sounds more dirty and genuine.

I understand much of the work was done at your own woodland studio. That sounds a great set-up? Was it a cool place to work and hang out?

Yep, in my very own Bloodshed studios. The very same room I had in the 90s for rehearsals and create the music that was put on tapes etc. in the past. Also a place where friends and I met up and played some music for fun before some of us decided to try out this DM style. This room was intact when I bought the house and moved back where I grew up and had this room active so to speak. And it didn’t take so long before I started to create the studio and so on. I finished building a small control room last summer and now it’s easier to record without being deaf sitting in the same room where all the noise is while recording.

Is this studio used to record and mix other acts? Has anyone else good come through the doors recently?

Of course. Everyone is welcome to record, mix or whatever that comes in mind. Though it’s not a studio with unlimited channels etc. it does have some limited stuff, but works just perfect to record an album as you can see. So far only Birdflesh have been recording some stuff and then I have helped doing some mixes from rehearsal sounded recordings. There is a small trend to have the sound so original it can be. Sort of sounding like a rehearsal. Then I have done some minor work. 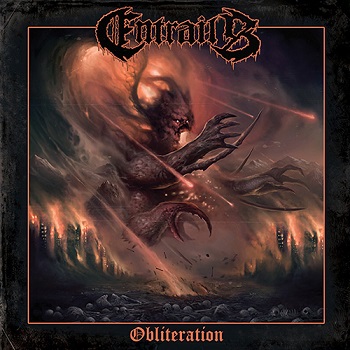 Because Entrails vanished from the scene for a number of years is there a feeling of making every moment count with the band these days?

Yeah. That’s true. I haven’t become younger during the years. So I think it’s natural to grab whatever that comes up now. I missed so much back then and now I want to do all those things that show up, though it’s harder to organize everything now since everyone has families at home and don’t have that will to be out so much that I want. That’s the hardest thing to deal with. Doing major tours is not the thing but being out and doing 4-5 shows in a certain area and then move around in Europe doing so from time to time shouldn’t be so damn hard to organize.

You’ve been busy on the road around Europe? How’s it been going and what’s the reaction been to the new material?

Not that much. This year we have had 3 weekends in a row doing shows in Germany, Belgium, Holland and Austria. 7 shows total. The crowd have been as usually. And the reactions on the new material have been good. We have only played the first single ‘Beyond The Flesh’ but many have heard it and was singing along in the song. And that’s great. Now in this writing moment we are looking for a place doing a release party for the Album release 15 May. Not easy to find anything good around here and those 3 places we had as a good option backed out in the last second and now there is only one place left to check and the clock is ticking.

When will fans in the UK get a chance to see Entrails?

That’s not easy to say. We have received a request coming over but as I said families and other things are crossing the path and makes it difficult to organize. But I do hope that we can come and do some serious shows soon. It was amazing last time we were there.

What plans have the band got for the rest of the year. Taking in any summer festivals?

No big plans for the moment. Finding a place to have our release party at is priority now. Then we have 2 open airs in Germany in July, Rude Open Air and Baden in Blut the day after.
And then 2 August we shall do a big support performance in Malmo here in Sweden when Cannibal Corpse are coming to town. After that zero things to do!

Finally Jimmy, when you first started Entrails did you believe you would still be kicking ass 25 years later?

Yepp. Totally. Nah, just kidding. This is just fabulous; living a dream more or less. This is just great. Too bad I missed all this back then. But am also glad this is happening. But being out more is more my vision nowadays.

Just buy the new stuff and support the underground. We do this for the passion of the old school music. Come to our shows when we are around. We promise you an evening with a lot of headbanging! 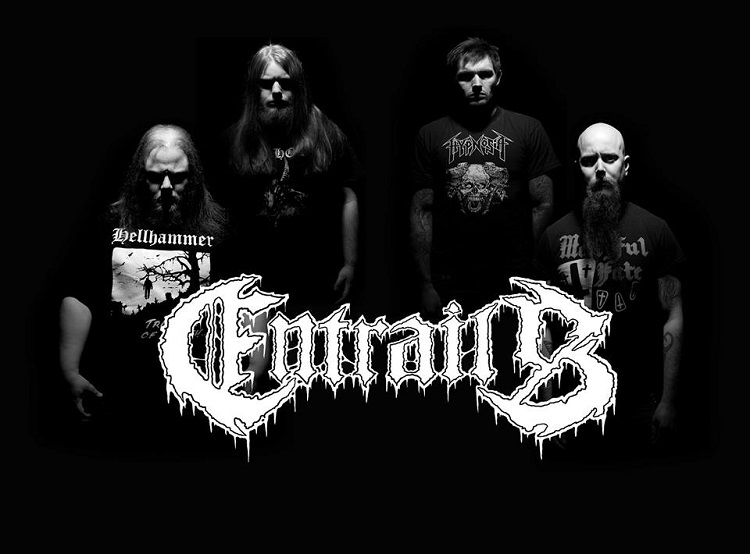