Interview by Raymond Westland (read his review of the album here)

Raymond: Can you start by telling how you become involved with Avatarium?

Jennie-Ann Smith: Avatarium started out as a project from Leif Edling (Candlemass) and Mikael Akerfeldt (Opeth). Unfortunately, Mikael wasn’t able to really commit himself due to time constraints. Marcus Jiddell (Evergrey) was also involved with the project. He has a studio in Stockholm, so he and Leif started to work on some demos. At some point they needed someone to lay down some vocals and they gave me a call. They liked what I sang for them on ‘Lady In The Lamb’ and ‘Moonhorse’ and they asked me to join the group. At first they were looking for a male vocalist, but Marcus couldn’t think of anyone who would fit the profile, so he approached me and the rest is history as they say (laughs).

Raymond: They were actively seeking someone with a blues/classic rock background…

Jennie-Ann Smith: Yes, they were really looking for someone with a blues/classic rock background. Leif and Marcus worked with a couple of male vocalists from the metal genre, but they didn’t really suit the music for Avatarium. I come more from a jazz and blues background, so singing that sort of material comes very natural to me. The marriage of their song material and my musical background is a very harmonious one. I’m really happy about it.

Raymond: So coming from a very different musical background how did you manage to make the material your own?

Jennie-Ann Smith: I think it doesn’t really matter what material you’re working with you have to make it your own. That’s at least how I work. As with the Avatarium material Leif wrote some really great lyrics and melodies for me to work with, so that made it really easy for me to relate to the material. The creative process was very relaxed and laidback. It was really fun from day one. Everything came together very naturally.

Raymond: Most of the material for the album was already written before you came into the picture. How much room did you get to put your mark on the music?

Jennie-Ann Smith: As far as the vocals I got a lot of freedom from Leif and the others to work with the music as I saw and felt it. In the beginning I had some preconceived notions of how the music and vocals should sound like, but in order to get the best results you really need to let all the possible stereotypes about a certain kind of music go and approach it with an open mind. When I got in the right mindset things went very smooth. Within the band all members have a very different musical background and taste in music. That really helps us to inspire each other and try out different things. The Avatarium record is something that we really wanted to make without any pressure or possible expectations from the outside world. When you’re true to yourself and you make the sort of music you like, others will pick it up soon enough. 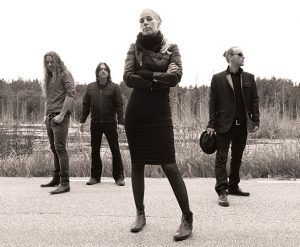 Raymond: One of the great things about the album is the clever use of contrasts and dynamics and the way you use them to counterbalance your vocal lines. How did you manage to pull that off?

Jennie-Ann Smith: Thank you! Well, I have a sort of inner Dio that comes out whenever a musical piece needs more power vocal-wise (laughs). In my early teens I got exposed to a lot of older Deep Purple, Led Zeppelin and Rainbow records, so I listened to singers like Robert Plant, Joe Lynn Turner and Ian Gillan. They are a part of my musical DNA so to speak. I’m very grateful that I have this voice that enables me from to go from belting out to a more soothing and fragile soulful way of singing. I’m very blessed in that regard.

Raymond: How do you decide which type of emotion or voice fits a certain piece of music?

Jennie-Ann Smith: I use the lyrics a lot for that. The feeling and emotion behind a lyric really defines how I sing. The dynamics within a song and the arrangements are important too. It all comes down to blending all those different elements into a vocal line that does the vibe and emotion behind said music piece justice. The melody lines are a great guide too. Sometimes a great melody enables you to really give a piece some push and to really belt it out (laughs).

Raymond: In some other interviews Marcus Jiddell said he really wanted to have a more organic sound for the album..

Jennie-Ann Smith: Yes, we really didn’t wanted to use multi tracking, Autotune and compression for the record. What you hear on the album is basically how we sound live. Some mistakes here and there preserves the human element in our music. The raw and organic sound really fits the bluesy and folky character of many of the Avatarium songs in my opinion. I think the material will sound awesome in a live setting. We played some songs live here in Stockholm. I can’t wait to play live again.

Raymond: Doom metal forms the musical base for Avatarium, but there a lots of subtle influences from prog. rock, folk and blues in there as well. Where does this come from?

Jennie-Ann Smith: It comes from all of us I think. A large of portion comes from Marcus as well. He grew up listening to a lot of folk of blues. We are all from Sweden and this bluesy and melancholic feel is something that comes from living in this country. It comes natural to us and you can hear that in the music. This is interesting because I mentioned this to Mikael Akerfeldt, because a first few Avatarium songs were actually written by Leif with him in mind. When we talked I found it soon that Michael and I share a lot of the same musical influences. We’re both very much into Joni Mitchell, Crossby Stills and Nash and similar artists. It’s progressive music but in a very different way and it has lots of American folk music influences as well. It’s quite interesting to see how things worked out in the end (laughs)..

Raymond: Did you receive any feedback from Mikael on your vocal performance on the Avatarium album?

Jennie-Ann Smith: Yes, I actually did. He is really excited about the whole album and of course that makes me really happy (laughs).

Raymond: Honestly I’m very surprised you’re not well-known, because of your considerable vocal talent. Did you receive any formal training?

Jennie-Ann Smith: Well, I’ve been singing since early age and I’m active as a freelance musician here in Stockholm from time to time. I’ve studied music for some years, before I enrolled into university to study psychotherapy. As a dayjob I work three days in one of the major hospitals here. Otherwise I like to keep myself occupied with music that really makes me feel good and that goes double for Avatarium (laughs).

Raymond: On the band’s official Facebook page there’s a stirring acoustic version of ‘Moonhorse’, performed by both you and Marcus Jiddell. Are there any plans for acoustic gigs on selected dates?

Jennie-Ann Smith: There aren’t any concrete plans at the moment, but it would certainly be great to do something like that. Leif is such a gifted songwriter and he comes up with these great melodies, which enables songs to be played in different musical settings as well. For now we’re really anxious to get out there and play those songs on electric instruments as they are meant to. That’s the first step. Of course it would be nice to do acoustic shows further down the line. Nothing is impossible in that regard, but for now we really want to introduce our music to the people and let them embrace our new record.

Raymond: There’s also an acoustic version of Black Sabbath’s ‘War Pigs’ on the Moonhorse EP. Who’s idea was that?

Jennie-Ann Smith: It was actually my idea. We needed a bonus track for the EP. We discussed multiple songs, but we settled for a song by Black Sabbath. It made perfect sense to us because Black Sabbath is one of the heritage bands for doom metal. With female vocals the track became more interesting, because it hasn’t been done that much before. I think our version turned out quite well. The other day I read a review in which the author wrote that he prayed to Tony Iommi that I wouldn’t use operatic vocals in that song. I think that’s funny, because many people have this preconception that female vocalists only use opera-styled vocals in metal. With Avatarium we do quite something different in that regard (laughs).

Raymond: Finally, are there any plans to support the album with a proper tour?

Jennie-Ann Smith: We really want to prioritize Avatarium as much as we can, but pretty much all the members have other obligations as well. Leif still plays live gigs with Candlemass and Marcus is also in Evergrey, which is also a high profile touring band. However, there are some festival performances planned, both in Sweden and abroad for next Summer. We’re in talks with a booking agency, so things are looking good as far as touring and performing live goes. Honestly, I’m amazed and very happy with all the response we have had on the Avatarium record so far. I really can’t wait to perform the material live on stage. I would love to give you some touring dates, but I’m not afraid to disclose them yet. I’m sorry (laughs).

And you can find out more about the band at these sites: