One day that internet will really take off…

With their latest album, Ten Human Jawbones released in August, Jake, vocalist and guitarist of Birmingham’s Slab took time out to talk to MR’s Jason Guest about its writing and recording, the concepts behind the lyrics and the artwork, and why these 3 mates still love writing, playing and gigging together…

Thanks for taking time out for this interview and congratulations on Ten Human Jawbones (reviewed here). It’s been about four years since Megafaunal Genocide. Why so long?

Thanks! Well it’s closer to 3 years from release to release but yeah still a long time! I guess it’s a few things, we had to pay off the loan we got for Megafaunal Genocide, we gigged a hell of a lot to do this, including a couple of full UK stints, two tours of western Europe and a mini-tour in Greece. This was all serious fun, but when you’re gigging loads you’re not writing! Then the fact that we all have 9-5 jobs means that the writing and recording process is kinda slow! Also we didn’t wanna rush anything and put out a shit album y’know? 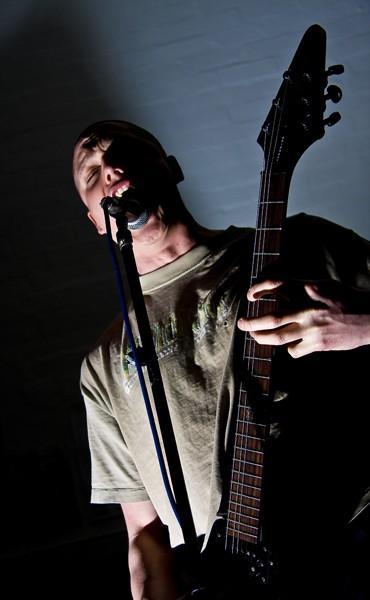 I don’t think there was anything specific we talked about. Another good album I suppose. Possibly allowing ourselves to experiment a touch more in the studio, on Megafaunal Genocide we stuck really hard to making it sound like just the 3 of us in a practise space almost. This time around we let ourselves and Ajeet do some weird stuff, just adding to textures and stuff, while still staying pretty much true to our live sound.

That’s a hell of an album title. What’s its significance?

Heheh! It’s a lyric in ‘stone Forest’, I was reading excerpts from Henry Morton Stanley’s diaries as he was travelling through Africa and he talks about a warrior with ‘ten human jawbones slung round his neck’. I just thought it sounded shocking and interesting.

When writing for Ten Human Jawbones, did you have an idea of how you wanted it to sound or did each of the tracks and the whole thing take shape as it was being developed?

Half of the tracks were written while we were gigging Megafaunal Genocide and half were written during the first half of 2013 when we gave ourselves time off from gigs to write. Some of the faster tracks I think were inspired by playing lots of punk/hardcore shows but when we stopped to write we purposely stopped trying to write in any particular style and just followed what felt right I suppose. That’s when it really started to take shape.

Have any of the tracks seen a significant overhaul since you first played them?

Not really, ones we played live before recording might have been tweaked a bit, but we tend to settle on songs in the practise room and just go for it!

Looking back on it, a lot of the lyrics are quite personal and deal with escape. From depression, alcohol maybe as well. But at the time I wasn’t analysing really. In fact the whole album is written around a pretty elaborate Sci-Fi-ish concept, involving the decoding of the human genome, mind control, domestic dogs being demonised and turned into food and obviously a reaction, escape from and battle against that. Throw in classic SLAB eco-destruction and anti-fasc themes and that’s the album. Cheery as usual! We decided not to make the concept an obvious, explained thing; it was really more something interesting to write around.

Were there any bands that influenced the writing for the album? If so, how did they inform the album?

The same bands that we’ve always loved will always inform our writing I think. Early punk and hardcore, English Goth stuff and death metal. That’s us in a nutshell! You can hear more of the hardcore stuff in this album I think maybe?

‘Involution’ is almost ten minutes long. How did you approach writing this track? Did you intend it to be this length or did it just keep growing?

I think it did just keep growing; some riffs and ideas just seem to lend themselves to being within a bigger, longer structure. It wasn’t really planned as a big long song or anything. The clean guitar piece at the start of it is an album interlude really but we made it as part of the same track so we had 10 tracks. Ten tracks. Ten Jawbones.

The album was recorded and produced by Ajeet Gill at Hellfire Productions. Why did you choose Ajeet and Hellfire?

Well this is our third album with Ajeet. He’s just incredible to work with. He knows our own minds better than we do it seems sometimes. You always know with Ajeet that he’ll put 100 and fucking 10 per cent into it. And still remain hilarious throughout. We had the best laugh recording this one, it was like the hottest days of the year, we were sweating, rocking, watching It’s Always Sunny In Philadelphia and drinking cider. Proper fun. Ajeet did an amazing job, he produced, mixed AND mastered. He’s our fourth member, no doubt about it.

Have you been playing any new material live? How’s it been going down with audiences?

Yeah we’ve played everything off it at some point.  Maybe 4 of the songs are pretty much set staples now and they’ve been going down well, they work great with the older stuff. I think anyway!

The design and artwork for the CD is incredible. Who was involved in the design? And how much direction did you give them?

Glad you like! The front cover was designed by an American artist called Bill Hauser who our friend Paul from Ram-man turned us on to, I think Paul and Kimbo sketched out a vague idea and Bill made it his own! The inlay work was by Marni Dhillon a friend of Big Jim’s. The pieces were done quite a long time ago but they suited the concept and music so well it was a bit of a no-brainer!

How does Slab write? Is there one main writer, do the three of you contribute different ideas, or do you jam ideas out in rehearsal?

Basically, there is no set way we write. The initial idea can come from any one of us and then yeah we jam it out. It tends to sound nothing like the original idea ha!

Musically speaking, how has the band developed since Megafaunal Genocide?

You tell me! It’s hard to analyse that when you’re in it I think! All I can say is we tend to write about 10% over our ability, so we do push ourselves! Not always, as we’re not out to be a super technical band, and often it’s just about doing whatever feels right for the song. I’m rambling..

Well, aside from a little less hair on heads and the fact that I can now grow a moustache if I get a 2 week run-up, not much! We’re still 3 mates who still love writing, playing and gigging together. We’re lucky!

In the last ten years or so, social media and the internet has had a significant impact on the music industry. What’s your view of the internet and its impact on music (social media, downloading, etc.)? Has it affected Slab?

Yeah I mean one day that internet will really take off. ;-)

Do you think that social media has had an effect on the quality of music?

Yes. I honestly do. People either want or are pushed into getting an instant fix. Artists and bands release songs as often as possible to keep themselves within people’s miniscule attention spans. Quality must suffer.

What does the future hold for Slab? More music? Gigs?

We’ll keep doing what we do for as long as we can. We’ve written some cool new stuff in the last couple of months and I think it’d be nice not to wait 3-4 years between albums this time! We’ve got a nice gig next year supporting Weedeater in London in March at The Underworld and we’ll hopefully get back over to Europe as well. We’ll play anywhere. Book us. Seriously.

Thanks for the interest! Well without people coming out to gigs and supporting us in so many ways, we’d be nothing really. So a true heartfelt thank you is in order I think! Cheers!