War is doom and doom is art. Death Metal is ancient violence.

Since the band’s inception in 2010, mainman IV (also of Ill Omen and Nazxul) has been pursuing a bleak and oblique vision of death metal rooted in the vast and vibrant Australian black metal scene, their “Ritualistic Death Metal Necromancy” subtly morphing into more atmospheric and more deeply cavernous shapes. On 5 August 2016, three years after the band’s first full length, Temple Nightside‘s second album, The Hecatomb, will be released through Iron Bonehead Productions. Here, IV talks to MR’s Jason Guest about the band, the album, and the till we’ve paid into the abyss…

Thank you very much for taking time out for this interview and congratulations on The Hecatomb. Your second album, what was it that you wanted to achieve with it? What kind of progression does it mark for Temple Nightside?

The only goal Temple Nightside has (and ever had) is to thread strands of necrosis into wax spheres, and to offer these as a Eucharist of black delirium. As for progression, well, with age the flesh evolves, and so too its ills and afflictions.

It would be fair to say two years, from initial riffs to a mastered outcome.

The album title refers to the Ancient Greek / Roma sacrifice to the gods of 100 cattle. Why choose this as the title? What’s the significance in relation to the music / lyrics?

The title reflects a spiritual/self-sacrificed demise. We’ve all paid toll to an abyss and ‘The Hecatomb’ serves as the sonic medium to what is bled into the lyrics and overall direction of the album. 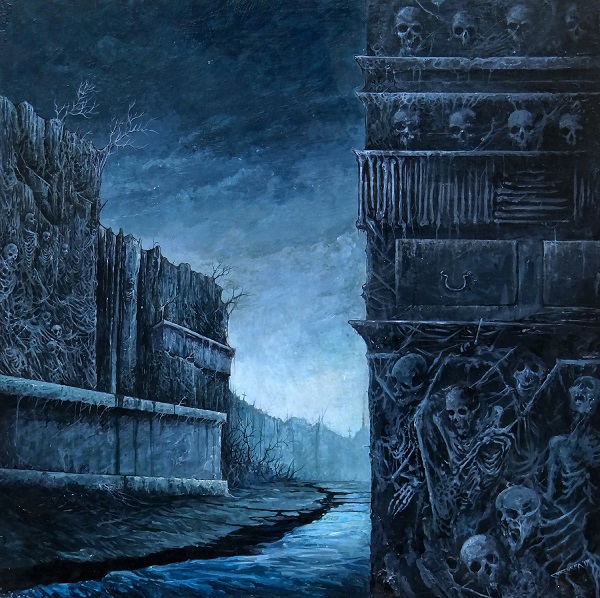 Now that the band is a quartet, how does Temple Nightside approach composition? Do you discuss ideas about what you want of each track or is it an evolutionary process?

Partly. Due to distance between members, we’ve only ever rehearsed once as a four-piece (shortly before the first ever TN gig). As for composition, IV ultimately dictates the shape of the corpse, the rest of us have at with our own audial blades and hammers to decipher where the limbs may better sit, and to translate the narrations of dead tongues.

What impact has the addition of the new members had on Temple Nightside?

We all hear our own voices.

Is there a concept or a philosophy that underpins Temple Nightside’s music? What inspires it? And how does it manifest itself in your compositions?

Scars and damnation. War is doom and doom is art. Death Metal is ancient violence.

Formed in 2010, how has Temple Nightside developed / evolved since its inception?

Through the addition of the other members the vision has expanded into a narrower framework. We now extract different shades of ash from the funeral pyre.

All of the members are and have been involved in other bands, all of which are fairly prolific in their output. What does Temple Nightside offer that your other bands don’t/didn’t?

An alternate output of musical expression compared to others, the freedom to experiment with different tuning/vocal techniques and with the addition of new band members, it gives all involved a chance to concentrate on certain aspects as opposed to whole collection of instruments/script that we hone via separate endeavours. It’s been a new (un)life bleeding into the band.

Not at this stage, though that is a logical idea.

Music defines itself, and provides an avenue to power and to the spirit.

Do Temple Nightside have any plans for live shows? And if so, will we be seeing you in the UK anytime soon?

We will be exhuming ourselves upon European soil next year. At this stage only Germany is on the cards, though blueprints are still being drawn.

What would the ideal setting be for a Temple Nightside live performance?

In an underground bar, swollen with smoke and haze. In a disused abattoir after midnight, rusted hooks hanging from the ceiling, the smell and stains of old dead metal infused throughout the structure. In the Sedlec Ossuary. Atop the mass grave of dead traitors.

What does the future hold for Temple Nightside? Is there more material in the works?

Yes, there are several drafts for the next work. We are looking at a DLP, with all members contributing tracks.

Await the release of The Hecatomb via Iron Bonehead Productions on August 5th. Curse! 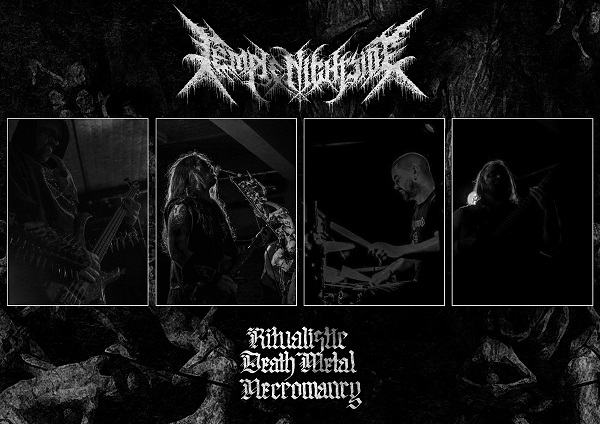