Three years after their second album, on 7 October 2016 Italy’s black/doom quintet Riti Occulti will release Tetragrammaton. Mysterious and magical, their ritualist doom has long drawn its power from ancient spiritual rituals and with this album it’s to be no different. Hypnotic and unsettling, the dual vocal approach of Elisabetta Marchetti’s eerie melodies and Serena Mastracco’s black metal rasps combine with the band’s eccentric and eclectic occult sounds to forge a phenomenal sound. Here, bassist Niccolò Tricrico and the two vocalist talk with MR’s Jason Guest about the album, the music, and the esoteric…

Thank you very much for taking time out for this interview and congratulations on Tetragrammaton, a very impressive piece of work! What did you want to achieve with the album?

Niccolò: We don’t hide our hope to expand the audience of our band. We perfectly know that most of our sound choices (like to not use guitars) are risky and we use to face surprising positive feedbacks or extremely hard attacks… our previous album Secta was hardly criticised because of the lack of guitars, not balanced enough by other instruments. That’s exactly what we tried to fix, using more compact synths and vocal melodies in order to obtain a better sound.

What kind of progress does Tetragrammaton mark for Riti Occulti?

Niccolò: For Tetragrammaton we used more complex arrangements; of course more catchy than the previous albums, thanks to a more powerful and homogeneous sound which transports the listener in what we’d like to define “a new Ritual”. The trademark remains the same adopted since the beginning, but with an evolved and enriched sound.

The album title is the Hebrew theonym that transliterates as YHWH or JHVH, one of the names for God in the Hebrew Bible and the track titles reference the Adonai, the Hebrew word for God, and the four worlds or spiritual realms of The Kabbalah. How did you approach putting these ideas into music?

Niccolò: All of our works are based on esoterism in all of its aspects. We speak of the mystic part of religions and cults; the unknown and the mystery are present in each creed, Jewish included, so complex and intelligible. For a long time I had the idea to realize an album about Tetragrammaton, partly because it’s extremely profound topic and also because it’s a great and fascinating source of inspiration to compose music.

What drew you to the Kabbalah for the album?

Serena: the Kabbalah is a medieval doctrine that holds mysteries and magic. It has always been used to explain dreams and events. It is part of the basic concept of Riti Occulti, being itself an esoteric and mysterious discipline. We are not experts but we read constantly texts and writings on that kind of matters, especially for this album: the theme of the biblical Tetragrammaton and the five worlds is so extended and interesting that we had to cut most of the lyrics because of the too much available material.

Did you have an idea of how you wanted Tetragrammaton to sound or did each of the tracks and the whole thing take shape as it was being developed?

Niccolò: Since I finished writing the promo of the album and we started rehearsing together, we were conscious of the sound we were looking for: I must say that we got it, thanks also to our sound engineer Luca Mosca. As usual, some improvement and new ideas were also made during studio recording.

Elisabetta: We do not use to sit on our ideas too long. Once the concept is fixed, we start immediately to compose, thanks to Niccolò: he is an incredible font of ideas! We can speak about something he’s interested to once, and have the base for a new album the week after! Therefore, every one of us can start to work giving our own contribution.

With two vocalists with opposing styles, how do you approach the writing and the performance of the lyrics? How do you decide who will perform what?

Serena: Since we are in two, we have the opportunity to weave the voices to create an ideal atmosphere to each track. Elisabetta is very good in different singing styles, so we can vary greatly between one track and another. Personally every time we start the preparation of a new album, I begin to read many books on the subject of the concept and to decide “who does what”. We listen to the songs and according to the lyrics, we think on how to recreate the right atmosphere on the emotions that the music left us. Every idea is valuable and all of us have the same musical taste.

The band is wearing cowls in the promo pictures, three in black and two in red and white. What do the cowls, the different colours and the sigils represent or symbolise?

Serena: We aim to a ritualistic scenic effect for our live sets as the dealt theme concede it… Every colour has its meaning: from black to white we have numerical, symbolical, esoteric and astrological meaning. The language in the esoteric texts is “particular”, a sort of secret code, like the alchemist did. It’s said that the Tetragrammaton has seven eyes, enclosed and transformed in the brightness of the white colour. Black, Red and Yellow symbolize respectively the Seen, the Smell and the Touch as described in the lyrics of our last album. 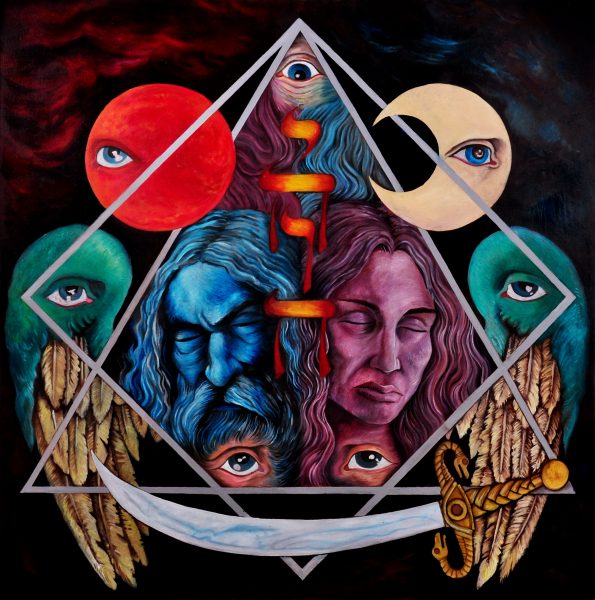 The artwork is very intriguing. Can you tell us about what it represents and how it relates to the music?

Niccolò: The artwork is the representation of all Tetragrammaton‘s symbols. Every detail shown in the front cover refers exactly to the riffing and the dealt theme, from images to colours.

Who’s the artist? And what of any direction was given in its design?

Niccolò: The artwork has been made by Ignazio Cuga, an Italian artist who already cooperated with us for the front cover of Secta (our previous album). I personally know him since several years, so it was easy for me to explain him our intention as for him to realise it: some tracks and a short summary about the theme and texts were enough for him to bring out another amazing painting.

How have Riti Occulti’s lineup changes affected the band’s approach to composition and its sound?

Serena: After Niccolò decided to quit with the band for almost three years (due to personal reasons), the band moved forward with some gigs and realized a video clip of Secta’s intro (‘Nigredo’). Nevertheless the band are not the same at all… This experience reinforced our friendship and we can happily say that we found a perfect equilibrium with the actual lineup thanks to the perseverance and extremely dedication of Giulio (keyboards and synths) and the entry of Francesco at the drums. He brought new rhythmical arrangements and structures to our sound deciding to join the band in a crazy race against time just two months before the recording session!

Any plans for shows in support of Tetragrammaton?

Elisabetta: Finally we will hit the road to Europe as support to Black Oath in October, then a release party as headliners for the new album in November/December. During the release party we will project the premiere of our next video clip in uncensored version.

What would be the ideal setting for a performance of Tetragrammaton?

Elisabetta: Our strong suite is atmosphere, both in music and image. The ritualistic aspect is pointed out by our costumes and stuff, and everything which can call-back a solemn Cult.

What does the remainder of 2016 hold for Riti Occulti?

Niccolò: Well, there are only 4 months to the end of this year…we have to work hard to get ready for the tour and guarantee the best shows as we can!

Niccolò/Serena/Elisabetta: Thanks to you Jason and everyone who paid attention to this interview. Enjoy our new album and follow The Sect!! 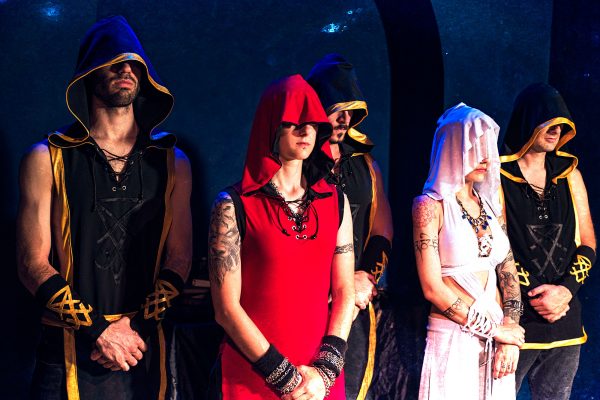