The spiritual journey through the mysteries of the Adversary…

Friday 13 January 2017 sees black metal disciples Fides Inversa release mini-album Rite Of Inverse Incarnation comprised of two almost-ten-minute-long tracks of unbounded fury and belly-tearing wrath. Here, a voice from the darkness gives MR’s Jason Guest the frights with tales of the band, the mini-album, the artwork, the duo becoming a quartet, and that place where syncretism and will and belief meet in ecstasy…

What kind of progression does Rite Of Inverse Incarnation mark for the band since Mysterium Tremendum et Fascinans? (reviewed here)

This new mini-album was conceived in an impetuous stream, few months after the release of Mysterium, when the idea of this collaboration with Wraath and Unhold came up during an alcoholic night in the suburbs of Stockholm, right after a great gig with Valkyrja and Antaeus.

The enthusiasm was high and a bond was created. To make our creative alliance alive we needed to reunite in flesh and spirit, so, despite the distance, we met in a studio in Germany for two days and nights and what you hear in Rite of Inverse Incarnation is the result of all the sweat and blood we poured out.

Did you have an idea of how you wanted Rite Of Inverse Incarnation to sound, or did each of the tracks and the whole thing take shape as it was being developed?

The two songs were written almost instinctively, just having firm in mind that they had to be performed in studio with the right atmosphere, to catch the fierce energy we wanted for this release. The attentive listener will also notice that the lyrics were created in perspective of a magical development that has been ritually manifested through the vehicle of Wraath’s throat.

The band has been a duo since its inception in 2006 but now, Wraath and Unhold have joined (on vocals and bass, respectively). Why choose to expand the lineup?

This could sound unusual, but for all of us this collaboration came naturally, without any sort of worries regarding the way it could have been perceived by the audience. We esteem and admire each other for the respective works, passion and dedication into the Black Metal scene. I’ve been a Luror admirer since I was a kid, and with Fides Inversa we stand proudly under W.T.C.’s banner since Mysterium’s release, while when Celestial Bloodshed came out from the muds of Norway I was so pleased to see that the land was finally giving birth again to devoted purveyors of devilries. But both Unhold and Wraath are personalities worthy of respect beyond their artistic efforts, and that’s why this collaboration was so instinctive.

What have they brought to the band? And what did they bring to Rite Of Inverse Incarnation?

What they brought? To the listener the due answer. I think I speak for everyone when I say that we are incredibly satisfied of the outcome, and ravenous for what is actually on the making. 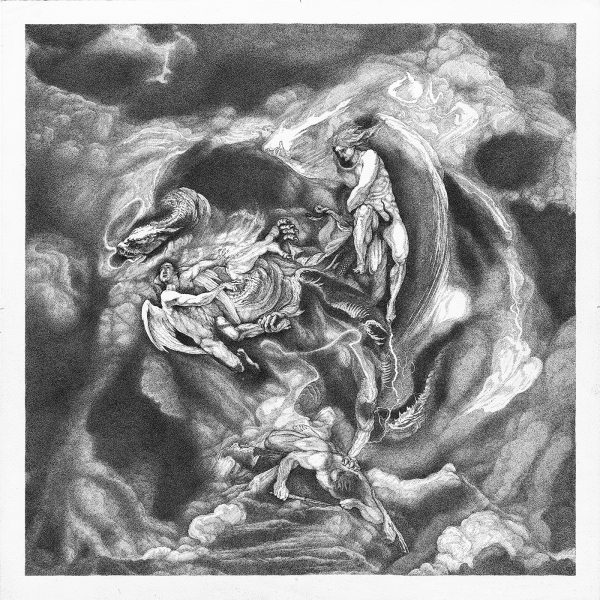 The visual aspect is always cognate to the lyrics and their audial transposition and it’s in those words that the listener will find the meaning of the allegory depicted in the illustrations.

The layout and design was by Artem Grigoryev. Why choose to work with him? And how much direction was given in its design?

Artem is an artist of undoubted talent. His skills and maniacal dedication towards his work are not simply a symptom of mastery, but they hide a passion that is akin to the work of a witch in the Arte and that’s why I’ve been instantly fascinated by his work. We shared ideas and opinions about how the whole work should have been envisioned, and I’m still astonished by the result.

There is a cohesive feel to this release, not just between the two tracks but with your previous releases too. Is there a theme, a concept or an ideology that underpins your music?

Of course, there’s a subtle fil rouge that connects all the releases and will continue through the futures, and it’s the spiritual journey through the mysteries of the Adversary. This very last effort is the one where the magical and ritual aspect of the path is more clear and bold, and it delves into numinous experiences manifested in flesh and spirit at the crossroad in a spiral of pain and ecstasy. But there’s no better medium than the poetry of the lyrics and the vibrations of their music to express what they were meant for.

Music is a very powerful medium for conveying messages, secular and spiritual. Do you think that music is itself imbued with a power to manifest the spiritual aspects of existence as represented in your material?

It’s not a new that music and rhythm have the power to induce altered states of conscience appropriate for connecting with the Other. And I like to recognize in the act of performing our music, a way to lose one’s self, which is similar to the rapture and bliss proper of the spiritual ecstasy.

There’s a constant desire to explore belief systems or systems of symbolic representation that are very different to the dominant religions of the west. Do you think they hold a significance, a truth perhaps, that more established religions conceal, seek to destroy or have yet to discover?

I firmly believe that syncretism is the key to recognize universal signals that are the pillars of the one truth, which is proper of the individual that searches and discovers it. The comparative study of religions and beliefs can bring to revelations that could not be gathered through the sole instrument of faith as a blind acceptance of dogmas. And we have been taught that mastering belief is also a strong method to direct one’s conscience through its will in the direction of one’s desire.

Do you have plans for any shows this year? If so, will we be seeing you in the UK?

No plans for the UK yet.

What would be the ideal setting for a Fides Inversa performance?

Idealizing is worthless, we adapt to the conditions that are offered, and that’s the real challenge: to transform every stage we walk upon in our crossroad, where flesh and spirit meet in ecstatic flow.

Early days I know as Rite of Inverse Incarnation is just about to be released, but what does the future hold for Fides Inversa? Is there more music in the works?

This upcoming release was conceived as the first of a trilogy. What I can say now is that the second chapter is in the working.

Thanks for your interest and attention.