Born of the ashes of the black metal band Thy Cold, Emrevoid rose in the 2004 in Cesena, Italy. September 2011 saw the band’s eponymous debut released and then countless shows alongside such metal heavies as Napalm Death, Essenz, Dementia Senex, Sedna, Under the ocean, Lamantide, O, carnality, Crawling Chaos and other names of Italian and international scene followed. Three years after their début album and a few line-up changes later, on 20 September 2014 came the EP Riverso (playing above). Here, Riccardo, Gaetano, and Ale talk with MR’s Jason Guest about the album, the band, live shows and existential dualism… 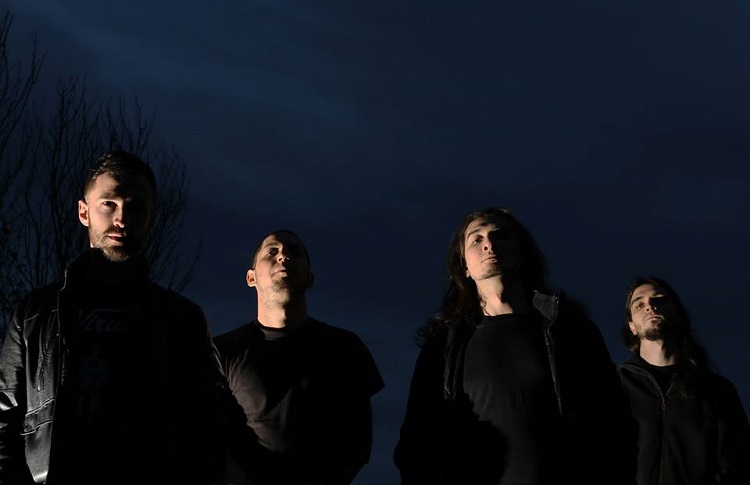 Thank you all for taking time out for this interview and congratulations on Riverso. What was it that you wanted to achieve with Riverso? Did you set any goals for yourselves?

Riccardo: Riverso represents a kind of natural translation between old times (with the Emrevoid full length released in 2011) and a new approach to extreme music (and new line up as well). We just felt the need to take a musical snapshot of who and what we are in this particular period. This is why we recorded an EP, and not a full length piece. It took basically one year of song writing, and that is what Riverso represents. The main target we wanted to achieve was to put in music what we felt in the most genuine, honest way. I like imagining Riverso as a new well-based step to jump from.

When writing for Riverso, did you have an idea of how you wanted it to sound or did it take shape as it was being developed?

Riccardo: Well, just half and half. Every song developed naturally day by day in our rehearsal room, but we always start from clear and consolidated ideas; this is our formula.

I read elsewhere that the lyrics are based on Gaetano’s existential dualism, the revitalising conflict between two antithetical archetypes, his desires and the oppressive nature of his limits. For you, what role does music play in this conflict?

Gaetano: Extreme music is the best vehicle to incarnate the eternal human affliction. A disease caused by the awareness of an existence which is limited by time, compared to nature or the universe itself. The same chaotic, ritual and impressive nature that we want to summon in our musical approach; a hymn to limits and imperfections. 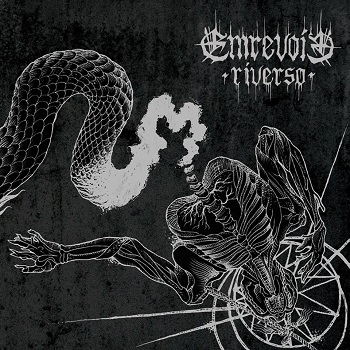 Ale: The artwork is composed by two handmade drafts chained to each other. On the front side you can see a reversed man stripped of his flesh, with a sort of halo around his head, and a rope pulling him down. From the spine grows the second draft that flows in the back cover, a deformed weird monster spitting fire upon a church. In my personal interpretation the man represents what I see as past, obsolescence, the limits of traditions, religions, prejudices, the failure of rigid thoughts. From his fall is born the progeny of the future, which is undefined and aggressive but also free of chains, pure, elastic. Creating chaos to reinvent order.

Tattoo artist/Gentleman/Satanist Matteo Al Dent designed the artwork. Why did you choose to work with him? And how much direction did you give him in its design?

Ale: Matteo is an old friend of mine and we played together in a local band years ago. The choice came easily as we know he’s a great artist and also a huge black metal fan with a strong musical culture. I sent him the first mix downs of Riverso with lyrics, and he was very enthusiastic about working on it. We left him blank paper and after a couple of weeks he sent us a raw sketch of what he felt reading and listening, and it was perfectly fitting the aesthetic and themes described in the lyrics.

Riverso was produced, recorded, mixed and mastered by M.Caggiano at Soundscape Studio SSS. Why did you choose to work with Caggiano? What did he bring to the recording?

Riccardo: Maicol is a friend of mine who is trying to launch his own Studio in the Italian underground scene. We were looking for cheap opportunities to record the EP, and we had the chance to follow the entire recording process step by step with him, judging every single moment. We know that Riverso doesn’t sound like a big kick ass mainstream production, but we didn’t want a glossy shiny and overproduced sound with tons of editing like most metal bands are doing nowadays. We have learned a lot about the recording process and the studio gave us tools and gears we needed, and we gave Maicol the opportunity to improve his skills as music producer.

In June 2013, bassist Riccardo Zappi and vocalist Gaetano Rizzo joined the band. What did they bring to the band?

Riccardo: More weed and a lot of bullshits.

Ale: Good weed and the right mood, a step forward for the band. Both are versatile and eclectic and they’re music addicted, which is stimulating.

Your eponymous debut was released in 2011. Musically speaking, how has the band developed since then?

Gaetano: A lot. Riverso plays a different approach, definitely. It has a sharp shell, but raw soul. And it’s keeping on.

Ale: Music evolved naturally with no forcing or directions, the mood is darker on Riverso, less thrashy and psychotic, I would say more serious without losing attack.

How do Emrevoid work together to create songs? Is it a collaborative effort or do you write individually? Do you discuss ideas about what you want each track to be about or is it an evolutionary process?

Riccardo: We always work on planned concepts. Alessandro usually brings forth raw structures, just to put a base down for the drum. The rest comes itself. We always discuss about every single note during the song writing until everyone is pleased with the result. There’s a good democracy inside our rehearsal.

Ale: As Riccardo said I usually write down ideas at home, recording guitar riffs, sketches and raw song structures. Then I bring the stuff to the guys and we start to develop the bone of the tune and try to play it to see if it works.

How did you come to work with Drown Within Records? Do you plan to stay with them for future releases?

Gaetano: Me and Cristian Franchini (ex-Dementia Senex, who sings in Lambs) are the founder members of the label, and we found Riverso a juicy work. We want to promote it as best as we can.

Ale: Drown Within is made of friends and band members (Gaetano), so it was the obvious choice to support the guys and to help this small underground label. And with their work they’re proving it has been the best choice for us.

What does the future hold for Emrevoid? Is there more music in the pipeline?

Ale: Of course, there are a couple of new songs in progress and we can’t wait to have new material to be played live. Composition needs time so there’s no release planned in the closest future, but we’re working on it.

Riccardo: Sure, we are writing new shit and planning gigs all over Europe (that’s what every band writes about!). Well, we are promoting Riverso playing live as much as we can, dovetailing our real-life works/vacations. We are looking forward to play outside Italy as soon as possible, why not England? Anyone interested can contact us at booking@grindontheroad.com

Riccardo: We really want to thank The Midlands Rocks for this interview. We appreciate it a lot. Just have a look at our contacts, you can download or buy our music on our Bandcamp, and keep supporting us! 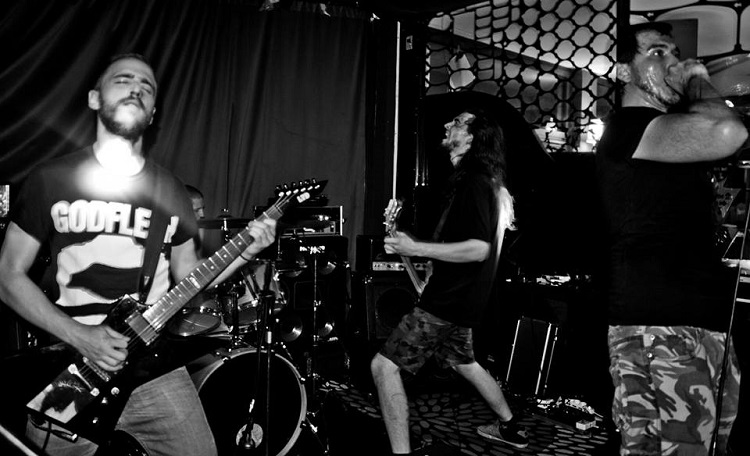