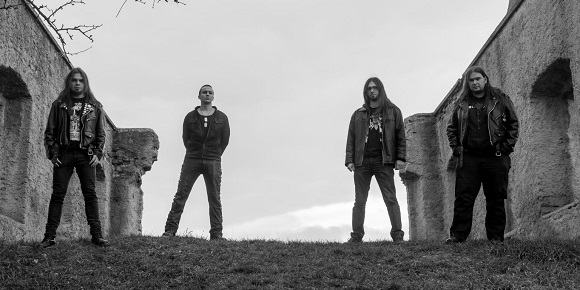 “…no swords, axes, old robes, folkish dances or shit like that”

Thank you very much for taking time out for this interview and congratulations on Grief For An Idol (reviewed here). Did you have a clear idea of what you wanted to achieve with the album when you were writing for it?

Honza: Well, any special ideas, we just wanted to record another album and spread it as much as possible. The new thing was just to provide the listeners with digital download via Bandcamp as well. And then just to work on the promotion and spread the name of our band a bit more than in the past years. I think we were partly successful already, but as we work on the promotion ourselves, it’s a bit hard. Would be nice to get a support of some bigger label in the forthcoming years, but that’s a bit high goal nowadays I guess. Let’s see after some months when the album is between people for some time. And musically we wanted to move a bit farther from the usual “pagan” sound and to the album more dark and metal with also sticking with what the band already is. And we are satisfied with the result.

Who wrote the lyrics? And where does inspiration come from?

Honza: There were a few authors of the lyrics. Most of it was written by myself. The topics and themes are from different mythologies, philosophy, anthropology (as I graduated from this subject) and stuff like that… I cannot speak for the others but the general theme is simply mythology avoiding the usual clichés of the humpa humpa pagan metal. That’s what we really don’t like. So no swords, axes, old robes, folkish dances or shit like that.

Is there a concept that underpins the album? Can you tell us about it?

Honza: There is no concept as such. Only what I have already described. But the theme of the title song is criticizing exactly those people who are walking in the tracks of re-inventing the traditions and putting the old ones to the modern environment. What we think is quite silly.

Can you tell us about the album title and how it links to the album?

Honza: I think it’s about the grief of some people for the old times. But the “new” rituals cannot compete with the old and real ones. They are just substitutes of what is already gone. That’s why on the cover is the old worshipper who knows how to treat the magic. And then there is a modern guy kneeling on the floor, trying to worship the old idol, but for him the magic doesn’t work.

The artwork is very intriguing. Who’s the artist? What was it about their work that drew you to him/her? And how much direction did you give the artist in its creation?

Honza: It’s our friend Moonroot … Vojtěch Moonroot Doubek. He did few great covers for bands such as Code and Horna. We found him once on the internet and got in touch with him. The graphics as such was then put together by our other friend, Lord Reverend Jim from Sindemonium. It’s good and easier to work with friends.

There are a few guests on the album, one of which is V’ganðr (of Helheim / Taake) who wrote the lyrics and performed lead vocals on ‘Minnestund’. How did you come to work with him? And how did you work to complete the track?

Honza: We have been friends for many years. I have toured several times with Taake and Helheim as a merchandiser. So we just ask, if he wants to help out and he did so. He recorded his parts in Bergen and sent it to us. Quite easy and quick cooperation.

One of the tracks (‘O veliji Vezě’) is sung in old Slavic language. Why did you choose this language? And why for just one song? Were you not tempted to write more?

Honza: We had couple of olds Slavic lyrics on the previous albums. It’s something special always, that’s why only one or two songs. Our bass player is interested in old languages and linguistic in general, so he did this.

Closing track ‘Perchta’ features an extended narrated piece performed by Ladislav Šinkmajer. Is it written by the band?

Honza: No, no. It comes from old Czech legends. This one is an introduction to one of those, telling the story about so called white lady showing up at old castles when somebody was supposed to die. Sometimes these white ladies are called Perchta according to one of those, whose name was really Perchta. And we choose Ladislav just to have the proper old voice on the album. For foreigners it makes not much sense, but for Czech listeners this is something like a bonus at the end of the album.

As you are from Czech Republic, why do you choose to sing in English rather than Czech?

Honza: It’s quite difficult to write good lyrics in Czech. Maybe we choose English because we cannot speak and understand it properly, haha. But we had few Czech lyrics in the past. Maybe there will be some again in the future.

The album also features bagpipes, flutes, and a choir. Why did you choose to use these instruments? And when writing, did you know which songs would feature them or did that evolve as you proceeded?

Honza: It depends. Sometimes it’s there from the very beginning, sometimes it comes during the recording. And why… well, just to make the song more rich may be. I don’t know. But what I know it must be used carefully, cos we wanna be metal band in the first instance, not a parody.

How has the band developed since its formation?

Honza: Uf, well, we started as a local band. Our former singer had the idea of creating a pagan metal band with some folkish influences. But he is out of the band now and we are trying to move on and simply do our music. I think with this new album we made a great step forward as finally we will go on a real European tour with polish Arkona and Czech Inferno (Ed: whose album, Omniabsence Filled by His Greatness, is reviewed here). We hope this can help the band to get on even more professional level and record some great albums in the future.

Honza: It’s natural. No “in advance” plans. What comes out comes out. We simply gather the ideas and then pick out the ones we like the most. It’s easy nowadays as you can use your PC and compose the whole song at home. Then we just adjust it in the studio. But this pre-production helps to choose really the best with the idea of how it will sound in the end.

How does the band write? Do you work separately and bring complete songs to the band or do you collaborate on ideas?

Honza: Most of the ideas comes from me and Sinneral, the other guitar player. He also adds some samples into the songs then, which makes it sounding richer. Yeah, and then we practise the songs in rehearsal and then finalizing it in the studio what is also very important part of it.

When writing, how do Panychida avoid the clichés of Pagan metal?

Honza: Not using stupid and cheap melodies and humpa humpa rhythms! It must be METAL enough.

Honza: We have some gigs in Gemrany, Austria in plan in the nearest future and then in Spetember we will tour EU with the aforementioned bands. It’s 11 gigs in Germany, Slovenia, Czech, Serbia, Slovakia and Croatia, so we are very excited to do this. For UK, no plans at the moment. I think for UK we’ll have to wait a bit more. But maybe some other tour in the future. Of course if there was anybody interested and invited the band, we are ready to come!

On the subject of live performances, what would be the ideal setting and/or venue for a Panychida show?

Honza: I think we can play any venues. We are used to play small gigs, we also experienced big stages. Everything has its own value and atmosphere. So I don’t really care. Whatever where are some people who might enjoy our music is good.

What does the future hold for Panychida? Is there more music in the pipeline?

Honza: Sure. We already have like half of the next album composed. But rather there are ideas, we will see into what these can evolve. I think we will record something new in 2015.

Honza: I’m not the one to share any words of wisdom, so I will let the music speak and I thank you for the time you took to prepare these questions. I really hope to come to UK one day, I witnessed a few great gigs over there and, except the security stuff you always have to pass through when entering the club in UK, the atmosphere of gigs was great. Maybe Camden Underworld will welcome us once! Yeah and you have expensive beer to me, hehehe! And that sucks, we are used to much cheaper!

And you can find out more about Panychida at these links: 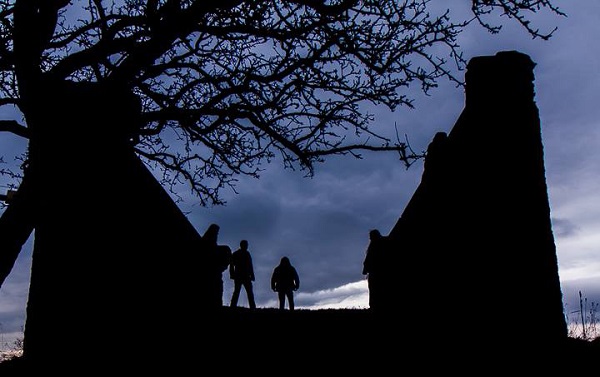