“All the people who dwell on this earth originate from the same genus. Someday this breed will be destroyed and in its place will come a new one.”

Jason: Hi. Thanks for taking time out for this interview and congratulations on your debut album (Ed: reviewed here). What was it that drew the members of the and together to work and write as Heretic Cult Redeemer? 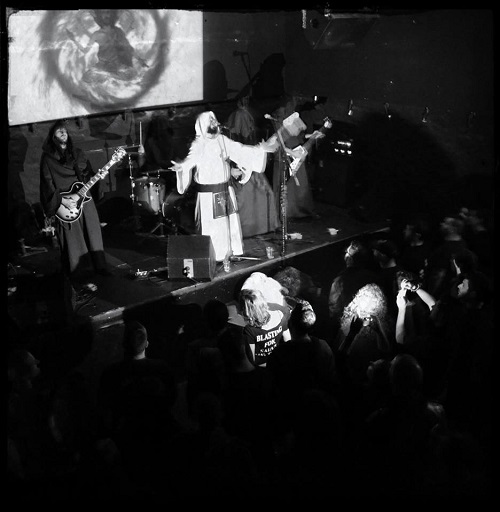 Heretic Cult Redeemer: Hello Jason, thanks for your kind words. I believe was the right time for us to join forces. We are close friends from our childhood and what happened is absolutely a normal continuation of our common lives.

Jason: What was it that you set out to achieve with the album? Did you have a clear idea of what you wanted for this record?

Heretic Cult Redeemer: When we started composing the album, our main goal was the concatenation of this piece of art musically and lyrically. Achieving that brings you a fulfilment on the record with a certain atmosphere that we had in mind.

Jason: The album was written and recorded in 2009 and 2010 but had to be shelved due to two members having to do their military service and so the album wasn’t mixed and mastered until 2012. What was it like to return to the album after so long away from it?

Heretic Cult Redeemer: It was a long process, but as I always said, this album was the soundtrack of our lives the last four years. It’s really hard to return mixing an album after so many times, but on the other hand you have a clearer vision of what you want to do.

Jason: Making the album and preparing it for release has clearly been a long and arduous process. How has it developed since you began working on it?

Heretic Cult Redeemer: From the start we worked alone. Is a dangerous path you have to walk. Sometimes lift you up, but sometimes you can lose your focus and your direction. For us was a really hard procedure, but at the end of the day we are satisfied. Now, we still working hard, but we have a label to help us with all these.

Heretic Cult Redeemer: With all the possible ways. We are open to each others’ ideas and with guideline HCR atmosphere we finally build the songs.

Jason: The artwork for the album is a very intriguing. Can you tell us about how the artwork relates to the music?

Heretic Cult Redeemer: Our artwork is 100% related with the lyric concept and with the vibes that you drain from music. This is our goal. Sound and vision becoming one.

Heretic Cult Redeemer: There two artists. Geo Arvaniti and Man.ster. We choose to work with them because they are talented friends who made what we had in mind reality. The artistic direction was absolutely ours.

Jason: In your ideology, you focus on the number seven as “the number of the universe, of the macrocosm, the number reflecting completeness and totality… It is the first number that contains the spiritual and the temporary. It is completion and perfection.” Can you elaborate on the significance of the number seven and its centrality to the band and its music?

Heretic Cult Redeemer: We would like to make an album integrated at all levels, lyrically and musically. The number 7 with all of these meanings was the elixir of creativity for us. I believe that all things happening around us have a purpose. For that reason we left nothing in chance.

Jason: Your ideology says that we are going through the fifth of seven stages. What does this stage consist of? How does it differ from the sixth stage?

Heretic Cult Redeemer: All the people who dwell on this earth originate from the same genus. Someday this breed will be destroyed and in its place will come a new one. The stages are seven in total.

Jason: Do we play an active or passive role in moving between stages? What I mean is, is this movement made possible by human endeavour or is it something that will happen regardless of our efforts?

Heretic Cult Redeemer: Always man has an active role, if understand it. Spirituality is the key to our survival. Our purpose is to pass from this world to the four dimension world. If someone does not achieve his passage to the other dimension will stay in purgatory until the seventh genus save his soul.

Jason: Can you tell us about “the seven-headed dragon” in your ideology? What does it symbolise?

Heretic Cult Redeemer: The seven headed dragon symbolizes the seven races will appear on this earth. As you can understand we are the “fifth head” of the dragon.

Jason: Your ideology suggests that we are more than flesh, that we have a spiritual purpose which must be fulfilled. What role does music play in the fulfilment of this purpose?

Heretic Cult Redeemer: As I said before our purpose is to pass from this world to the four dimension world (the three dimensions of space together with the fourth dimension of time). Music is a way to express those ideas and spread vibes of energy to the people that follow you.

Heretic Cult Redeemer: With the old school way. We send promos and they like it. We choose Iron Bonehead Productions because this label is really respected to the black metal genre. They really helped us. A big thanks to A&R manager Patrick for his belief and devotion to us!

Jason: What does the future hold for Heretic Cult Redeemer? Is there more music in the works? Any plans for live performances?

Heretic Cult Redeemer: We are promoting our debut and we will announce some shows really soon, but we are also in the composing procedure of our second full length.