The vermin that is religion, represented by a rancid pile of Popeburger…

Thank you very much for taking time out for this interview and congratulations on Grinding Christian Flesh. Musically speaking, how does it mark a progression since 2012’s Nex Um Monastica?

Thank you Jason! I feel the progression since Nex Um Monastica has been subtle yet profound. While not reinventing the wheel, we definitely delved into more influences and styles with Grinding Christian Flesh. Certainly more black thrash on some songs, some death metal leanings on others, more leads, harmonies, and solos overall. But never steering too far from our path of fast, evil, and raw. Just a more dynamic journey.

We play music as a release and hobby. It is a craft we take seriously but I don’t know that we ever have a specific achievement in mind with making our songs or recordings, as ultimately they are purely for us. We of course would like to reach the right people who genuinely appreciate it and our ultimate goal is to perform our craft in as many dark crevices of this strange sphere as possible.

We never set out to sound a certain way when writing, we just let it happen naturally and then form the song order to a flow that we feel complements each other and keeps the album interesting as a whole package experience. We sometimes use references of other bands or albums when mixing, be it a drum sound, guitar tone etc.

Generally Hredthel (vocals) writes the basic skeleton structure of most of the songs and Crucifixus (guitars) adds harmonies, solos, and riffs here and there. Some of the songs were written more by Crucifixus and then Hredthel adds to it. Sometimes we drastically change it by the end, but is usually a lot of adding subtle nuances and embellishments. With drums I realize that guitarists often have a tempo in mind with specific riffs and I add all cymbals, fills, and dynamics to vague skeletal structures.

While this in no way is a concept album it is quite obviously seething with anti-religious sentiment and harsh blasphemous overtone.

The artwork for the album is ugly as hell! Can you tell us about the design and what it represents? Who’s the artist? And why did you choose to work with him?

The artist is my tattoo friend Brian Long. We chose him because I see the guy 5 days a week so I’ve become very familiar how competent he is at his craft and he genuinely enjoys drawing evil shit. I came up with the concept by visualizing a very blatant depiction of the title track ‘Grinding Christian Flesh’, your mind kind of takes you there naturally. The sabbatical goat Baphomet representing the left hand path ritualistically annihilating the vermin that is religion, represented by a rancid pile of Popeburger.

Being based in the NW, I have seen Odin at a couple shows and met a few times since ’08. But basically I just sent him a promo pack of Nex Um Monastica and they were impressed enough to know they wanted to release the next one before even hearing it.

What does the act of creating music mean for Infernus?

Great question, but also very loaded. It is a uniquely personal experience and may even vary within different members of our band to some extent. For me it is a highly spiritual experience and release. Music is a universal language and the highest form of magick in my opinion. It incorporates all of our senses as well as conscience and sub conscience and defies time and space. Music isn’t always leisure fun. It’s time, work, sacrifice, pain. Music always has and always will change the world on every level, from trivial to profound. To sum it up, “Without music, life would be a mistake” – Friedrich Nietzsche

We have moved from a small town of Albany to Portland, so we have more exposure to great shows. We have grown as individuals and musicians, as we were just young little shit heads when we formed. We have a better idea of the direction we want to head now and the tenacity to make it happen. Humble confidence and drive are huge. And both are hard to come by as teenagers. Maturity and honing a craft can take time as well as failures/trial and error.

What does the future hold for Infernus? Early days I know as the album was released in September but is there more music in the pipeline?

Half of the new album is already written and we will continue to plug away at that. Playing shows more sparsely unless it really catches our attention to focus on more recording. We also just recorded a Bathory cover of ‘Dies Irae’ to be featured on a 33-band tribute CD entitled Blood Fire Valhalla: An Ode to Bathory. Joel Grind of Toxic Holocaust mastered it and did a great job. Details of the 3-disc tribute CD will be revealed soon.

Any gigs, tours or festivals planned?

We will be doing a short tour this July and headlining the Festum Carnis in Lake Tahoe. Then playing with Pseudogod in October.

Thank you for the interest Jason! Closing words? No thank you, as the drummer I’d say I’ve already probably said too much. I’m going to go back to whacking shit with sticks now, cheers! 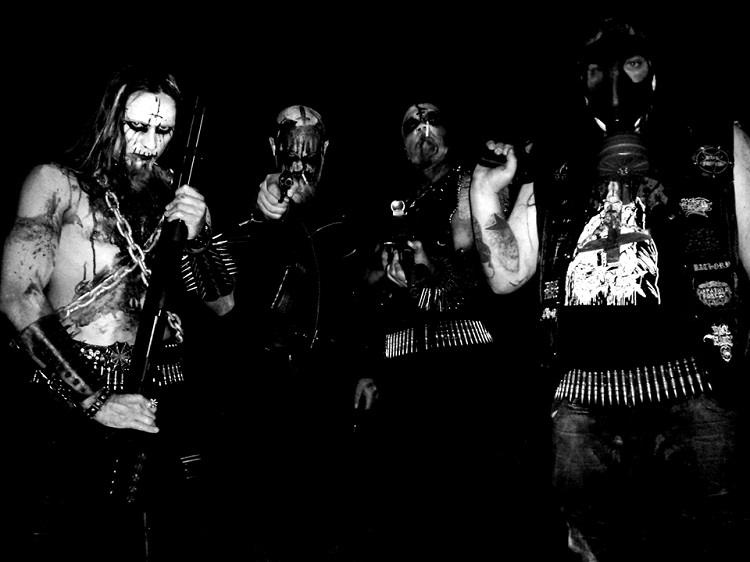