What do you do when everything goes to shit? Not normal, mundane, day-to-day shit, but AAAARRRGGGHHHH KILL EVERYBODY AND START WITH ME shit. Depression, anxiety, misery, torment, whatever you want to call it. It needs a name and it needs a soundtrack. And who better than Ginger (yes, the Wildhearted one) to deliver Dark Black (reviewed here) under the Mutation III moniker? Here, MR’s Ian Savage probes the man himself on many a topical topic…

First question – how’re you getting on? Last time we spoke you were on Venlaflexin – how’s it’s working out?

I changed medication, and the new stuff seems to be working okay. Still early days, but I’m positive. These days it’s hard not to be, there’s a lot of good things happening.

Okay, I have to ask (as a fellow sufferer of depression) – how did the Brexit/Trump thing affect you?

Trump was a shock, but I was against the Democrats anyway, for stitching up Bernie Sanders, so I wouldn’t have been happy if Hillary had got in either.

Brexit fucked me up because I honestly thought this country was more conscientious, but now I hear that only 26% of the country could be arsed to vote. So we’re just a very lazy bunch, which isn’t an attribute to be proud of but it’s better than an ugly racist underbelly festering in our communities.

If the last election had seen a huge majority swing towards Tory leadership, as predicted, then I honestly think I’d be back on heroin and steak, but the youth movement really inspired me.

And now Corbyn even looks and acts like a Prime Minister should, so I’m going to enjoy seeing Theresa May squirming until she is fired, or is incarcerated, and then I’m sure there’ll be some priceless Donald and Boris comedy, until we stop fucking about and get Jeremy in number 10 where he belongs.

I’m guessing that Mutation III is a fairly conscious response to the world as it’s become?

It was the partly a reaction to how we suspected the world would become, and our feelings of helplessness at watching the rich elite enjoy free reign to piss over the rights of the poor. But when you have Kim Jong-un calling Trump a psychopath you realise that this might just be a humorous interlude before the political world begins to develop a conscience.

Either that or we’re all utterly fucked, which I’d much rather see than the growing power and control of the elite banking systems any day.

How did you and Scott from Exit International come together for this?

We’ve played tons of shows together, been to Japan together, we share political and social priorities and we are very similar in emotional and mental make-up. Working together was a given, but neither of us expected this reaction.

It’s utterly uncompromising, and pretty brutal; how do you even write that? You have the ‘Caravan Tapes’ on the album’…you surely can’t write that in a caravan?!?

We were simply creating the sound of our feelings, which is what all good music does.

We both have a very dark side, the kind of thing that musicians try to get away from within themselves. We decided that instead of creating escapism we’d document our struggles, and this seems to have found a good home. The response has been amazing so far.

How do you go from taking songs written in a caravan (or elsewhere, for that matter) into a studio to record?

We had recording equipment set up in the caravan, so we weren’t exactly writing on acoustic guitars. The rest was just chipping away at the rock and getting rid of what we didn’t want until the statue inside revealed itself.

Some musicians have programmed everything already, some go in with ‘skeletons’ of songs…

We went in with intentions and created everything from there. We kept nothing that was recorded for the demos, which is handy for bonus tracks as the demos were actually pretty good.

Okay, it’s an overtly political record. “…that’s not an achievement, it’s a fucking privilege” [from ‘Irritant’] – I love that line, but how do we go about addressing it?

We do one of two things, we develop our own spiritual emotional side, and hope that others do the same, or we wait for the end of days and party like fucking vikings. Never stop trying, never stop believing but do remember that were dealing with the most despicable species of life on this planet. If we fuck everything up then I really wouldn’t be surprised in the slightest. And we would fully deserve our fate.

I really don’t go in for the hyperbole in current media, pitching this terrorist faction against that hateful minority of the public. It’s so blatant that my fears are for the gullible, and how dangerous they could be lead to become.

The media are fully to blame for the uprising in hatred in this country, and who can blame them? Their bosses are terrified of Corbyn, and they’ll all, hopefully, be fired when he gets in.

I think that anyone who causes human, or animal suffering, should be held to the greatest punishment possible, hopefully as a deterrent.

How do you align yourself politically in the UK?

I’ve always been Labour, I’ve always been socialist. I hated ‘New Labour’ and think Blair should be put up against a wall and shot for his crimes. I despise greed and detest ignorance. If people can’t be bothered to educate themselves then, as far as I’m concerned, their views don’t matter.

I’ve had so many arguments with the would-be Ring Wing online. Most of them are so badly informed, due to their daily reading material – please don’t even mention these shit rags, we all know who they are – that if they can argue with me online they can Google the Tory manifesto, and the Labour one, for that, and try to find something out for themselves. The evidence is right there.

What, in your view, is the best way forward for Britain?

As a socialist I’m rooting for the youth of Britain to get behind Corbyn. I hope the young are getting sick of being lied to, and would rather it not continue If they’re using ten minutes a day to read up on Corbyn’s commitment and consistency then they’re a better informed generation than mine are turning out to be.

Would you ever consider leaving and setting up permanently in another country?

Yes, I’d do it tomorrow if I didn’t have a young child at school. But this is his country too, and running away from the fight isn’t going to make his future any more reliable or safe. I want him to take an interest in his future and the future of those in need in Britain, not spout ill informed nonsense on Facebook from a beach in California.

Okay…if you could take up citizenship of ANY other country and carry on business as-is (travel costs aside), where would you move to?

I would move to Los Angeles. I have lots of friends there and the music scene is still relatively healthy but needs some new blood. Or maybe San Fransisco. Japan would also be in the running, I am in love with the people of Japan as a society.

Since Mutation III is such a full-on unleashment (not even a word) of anger…I have to ask, are you alright now? At least, for a while?

I will die angry, but I hope to aim it outwards instead of inwards. I pray that I can live to the end of my life without committing suicide. Right now I live a day at a time, and try to stay inspired by people. So far, so good.

And if the answer to that isn’t “no, I’m jumping off a bridge after I press ‘send’” – what’s next?

All I want to to is devote myself to the promotion of Mutation and my new solo album, ‘Ghost In The Tanglewood’, which comes out Feb 2018. They are both sides of my personality, both pathologically honest and both very different sounding extremes. I’ll be happy to commit to making sure they get into as many ears as is humanly possible. 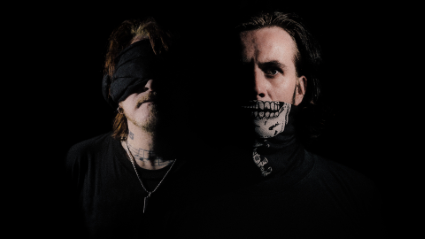