With their latest album Unravel released in October 2013 – their first in eight years – Sanrabb, Byting and Skinndød of Norway’s Gehenna took time out to talk to MR’s Paul Castles about, amongst other things, the new album and what they were up to during those eight years, the Norwegian black metal scene and their place in it, fans who think they are ‘truer’ than the bands, and the time consuming nuisance of corpsepaint…

Gehenna’s latest album Unravel was released just over a year ago. Tell us something about it.

The music was written in a quite short period of time between 2012 and 2013, which helped a lot in making the whole album sound like one wholesome piece of music, not just a collection of songs. All the songs were well rehearsed before the recordings started, so we recorded most of it live in an abandoned warehouse in Sandnes, Norway, (neighbour to our home town Stavanger) and the whole thing was done in a matter of a few weeks in May 2013 and we are very content with the results. Unravel is, for several reasons, pretty much the most bleak and depressive Gehenna-album to date.

Have you been happy with the reviews and is this something you ever worry about?

Reviews are something you can’t do anything much about. As usual with any Gehenna album, people get it instantly or they don’t understand what we’re doing at all. The biggest misunderstanding this time around might be this popular idea that since it’s been eight years since we released WW, that we have any intention of moving back in time musically for making a more successful ‘comeback’ album, which couldn’t be further from the truth. But what can you do. People think and write whatever they feel, even though it’s absolute bullshit they assume without knowing if it has any root in reality. Most reviews have been very good, though, so no hard feelings. 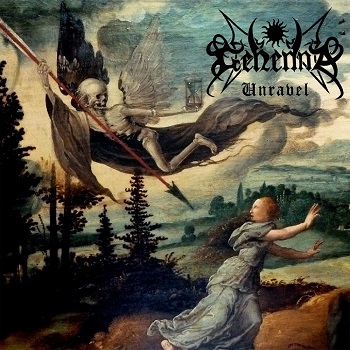 This album was a long time in the making, an eight year gap since WW. What were some of the reasons behind that long wait?

The 8 years between WW and Unravel the usual stuff called ‘life’ happened, so band members came and went while music was sporadically being written, then discarded or used for other projects (most members of Gehenna have multiple musical projects going simultaneously). None of us have ever been able to live off music exclusively, so at times activity has inevitably been quite sporadic. At the same time we are very precious about the music we put out. Gehenna will never release an album just for the sake of releasing an album. It has to be a real statement. If we are not 100% content with the music it’s just not happening. This time it took all of eight years before it did, but if that is the time it takes, so be it.

Was there a point where you felt Gehenna’s career had come to an end or did you always feel that the band would become a force again?

Gehenna just seems to be an unstoppable force beyond our control, really. Music always seems to come up even if there’s no real line-up for the band, which was the situation when Sanrabb wrote the WW album more or less completely on his own. At that point there were some ideas floating around to do the album under another name than Gehenna. That’s probably the closest the band has ever come to a permanent end. Luckily that didn’t happen.

How have Gehenna evolved over the past two decades? As the only sole surviving member can Sanraab tell us how the current line-up compares to previous ones?

According to Sanrabb there hasn’t ever been a better line-up of the band than now, both musically and personally. Not to disrespect any of the bands many ex-members, but for the first time in many years everyone in the band are equally dedicated and hard working to make the music and the band work somewhat properly and professionally, which hasn’t always been the case.

You’ve announced a Euro tour but sadly no UK visit, why not?

The Euro tour in May is just a ten date tour w quite a small budget, and for practical and economical reasons the UK couldn’t be included this time around. Playing the Temples Festival in Bristol last year was an absolute blast, so we certainly hope to come back to British shores later this year. There are plans and negotiations going on as we speak, but it’s way too early to announce anything.

I see you’re playing Blastfest in Bergen. Presumably this is a festival especially close to your hearts?

Only geographically, really. We’ve never been to Blastfest before, so we don’t have any idea what it’s gonna be like. There’s obviously a lot of good bands playing, so it’s probably gonna be good fun. Bergen usually is.

Is the black metal scene in Norway today as interesting as back in the 80s/90s?

There’s absolutely a lot of good bands going still, and new ones that take the genre further, but the initial effect of when the whole Norwegian BM-scene originated is now so commercialized and generically streamlined that it’s hard to find the ones that really have something genuine to say these days instead of just following an already established formula. There’s definitely a lot of Black Metal around that seems to be played and arranged by numbers and hyped by a pre-set machinery, which couldn’t be further from what the whole scene was rebelling against in its formative years, and speaking as both music fans and musicians; we couldn’t care less for any of that. But you can’t really take too much notice of those things as a creative artist. You continue to evolve your own thing and walk your own path, which is the only sensible thing for any genuine musician to do.

How proud are you of your role in the original wave of Norwegian black metal?

What kind of relationship do you have with your fans?

Mostly good. As long as they’re interested in speaking to us as people, not only as a Black Metal entity, there’s never any problem. The only time it can be a little difficult is when some guy (it’s always a guy) walks up to you just to prove how ‘true’ a black metal fan he is and how much ‘truer’ he is than you and that you have lost the plot ages ago and that ‘true’ Black Metal died with Euronymous and that there hasn’t been any ‘true’ Black Metal since Varg Vikernes got put in prison and blablablablabla. That can be a real fucking pest. Sitting behind a table to sign stuff like some tourist attraction at these ‘meet’n’greet’ happenings at festivals are also quite weird, but OK, as long as people don’t get too starstruck and weird it’s no problem.

Do you ever tire of applying the corpsepaint before a gig?

Every time! It’s a bloody time consuming nuisance and a key factor for stressful pre-gig situations, but somehow it needs to be done to set the tone straight visually and mentally before shows. We have in fact done a couple of low key hometown shows without it, but that’s only for special occasions. 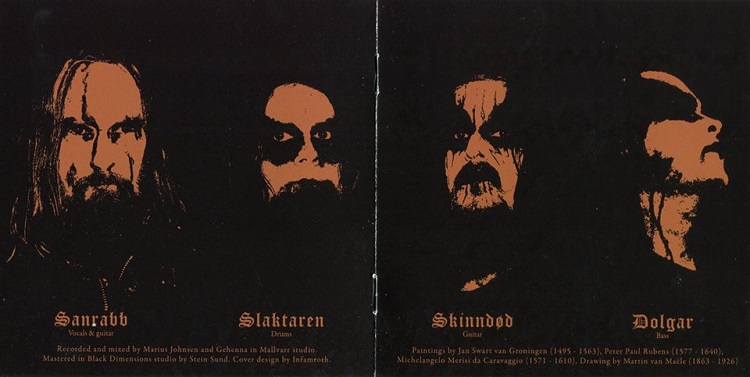