It’s easier to argue with myself than anyone else.

Rage of Angels are back ! Tell me a little more about what happened last year having been set up to do a few gigs and Skyfest and then nothing?

Well. We were ready to go with a European tour but a couple of the bigger shows folded which meant that the funds to play the other shows weren’t there anymore. The line up we had together to do those shows had put time aside from other projects so it meant that it wasn’t possible to re arrange the shows quickly…add that with the fact that I had a couple of Tyketto tours as well meant that I had to wait nearly a year to introduce the band to a live audience

The band contains an impressive line-up, how did you find them?

They were homeless and hungry begging outside boots… hahaha… I am very lucky to have some good friends and great connections. Neil Fraser has been with me almost from day one, Joao was lined up to play drums on the last tour and had a free slot for these shows…Irvin was recommended by Al Barrow of Magnum…Gav was recommended by Irv….and is a stunning player…and Jason was one of many singers I looked at.. I even tried a couple out in rehearsal but Jason had THE voice I was looking for…that’s why it’s taken so long. I didn’t want to go out live until I knew I had the guys to make people go “wow” every night.

Tonight’s gig at the River Rooms is the second in the Dreamworld Tour, did Belfast come up to expectations?

Belfast exceeded every bodies expectations… the welcome… the countryside, the audience, they knew every single word of the album which was really rewarding to see; the Diamond ia a very special place, everyone should visit at least once. But then once is never enough

Let’s talk festivals. You have Vaseby and Firefest… what else is coming up for Rage of Angels?

We have just confirmed one for next year and there are quite a few more in the pipeline…now we’ve built a great live reputation we are up for quite a few major things in 2015.

Dreamworld has been out now for 15 months and has been well received, is its successor in the pipeline?

It’s written and pre-production has started. It’s been on the back burner because I’ve been so busy with Tyketto and also getting the right vocalist was key. I have some time now until the next tour so the studio is calling, so Spring 2015 I would guess.

Do you plan the songwriting process or is it an ongoing thing as and when ideas happen?

I write the songs in my head. I can hear the whole finished product. I may be mad who knows but that’s how I write. I had help from Danny with the lyrics to ‘Over and Over’ cos it made sense and he’s the best lyricist there is.

I handed the title of ‘Beating of your Heart’ along with some key phrases and the melody and said to David Reed Watson, there you go. He did a great job, the rest I did myself.

How do you decide who writes with you?

The new album is 100% written by myself. I’m halfway through the third too. I don’t usually write with anyone else as I’m not very good at compromise lol. I’m far too much of a control freak. Seriously though, I have very strong ideas on how each song should sound from the first to last note of every instrument. It’s easier to argue with myself than anyone else.

Will you still have guest appearances?

Yes but only a couple so it won’t detract from the band performances.

What does the future hold for Rage of Angels?

A new album in 2015 and much bigger shows…It’s down to the public as to what we do next really. Thankfully we already have some great supporters and if we can pick up a few more along the way then we might be ok.

Thanks for talking to us Ged. I know a lot of people at the River Rooms seriously enjoyed what they heard and it was great to finally see you all on stage. I, for one, can’t wait for the next gig. Thanks.

Read our review of the show at The River Rooms here. 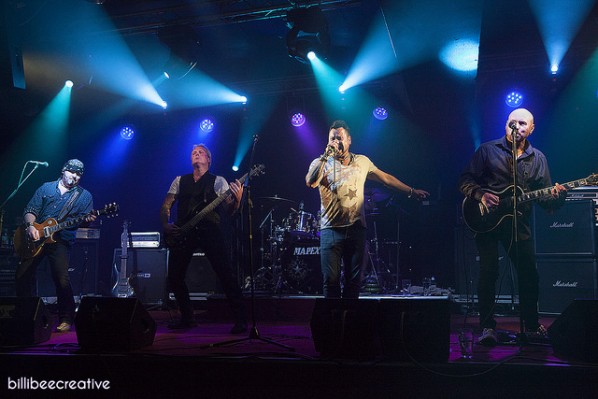