“Firstly, music is an emotional amplifier… Working its magic it grabs you and forces its mood upon you. In the best case you’ll find yourself trapped in the mood driving the composer while the music was created.”

Jason: Thanks for taking time out for this interview and congratulations on Eldir Nótt; it’s a fantastic piece of work (Ed: Jason’s review is here). It’s been two years sinceBluostar was released. What was it that you wanted to achieve with Eldir Nótt? Did Bluostar, it’s writing and production have any effect on its composition?

Fyrnd: Sure, in one way or another. There were some experiments on Bluostar which turned out well, and which I tried to take to a more extreme level on Eldir Nótt. Surely my personal situation paved the way for Eldir Nótt, so the emotional state which gave birth to the music is probably the main difference.

Jason: Can you tell us about the album title, Eldir Nótt, its meaning, and how it relates to the music?

Fyrnd: Eldir Nótt is an old-icelandic expression for “dawn”. The concept behind the album deals with suncults and it tells the story of an archaic culture, being stuck in eternal night (winter solstice in the northern hemisphere), and thus tries to herald the time of daylight and sun through sacrificial offering. The matter “fire” as a force of cleanse plays an important role on the album.

Jason: I read elsewhere that Schopenhaur’s Metaphysics of Will – that suffering and the need for fulfilment are our ultimate motivation – was inspiration for Bluostar. Did this influence the writing for Eldir Nótt or have you broadened your philosophical palette for the album?

Fyrnd: No. Still this is my main perception of our nature and the suffering we all have to face. One could connect this to other traditions of thinking of course. Even the classic philosophy plays with this kind of thoughts. I never meant for the album to be a medium for a wide range of philosophical discussions. There are certain ideas which I follow and which are important to this project. I try to stay true to them otherwise it would not fit the concept of the whole project. Capturing a certain atmosphere linked to those thoughts and ideas is the main intention.

Jason: The artwork for both Bluostar and Eldir Nótt are striking. How does the visual aspect of Fyrnask relate to and/or represent the music?

Fyrnd: The artwork is always conncted to the topics of the album. I like them to be very symbolic, so that there’s an opportunity to get your own interpretations working here. In general the visual representation of the project is highly important to me.

Jason: Can you tell us about the artwork for Eldir Nótt? Who is responsible for the artwork? And how much direction did you give him/her in its design?

Fyrnd: The artwork was done by David D’Andrea and Benjamin A. Vierling, two splendid artists which I hold in high regard. I explained the concept of the album quite detailed to them and asked them to find something that fits on a symbolic level. The avian imagery in particular is also connected to suncult. Just think of Siu, the Hittite sun god, for example, who wears a kind of crown made of a feathered sun. A poster featuring the guy’s artwork will be included in the LP.

Jason: Your albums feel like a journey that, given the proper (and much-deserved) attention, can be transformative. How do you approach composition? Do the pieces begin with a melody, a passage, or the concept perhaps? How do you develop these ideas? Does how you envision the finished work affect how you deal with the smallest detail?

Fyrnd: I write down everything before I go and record something. Beforehand I gather ideas and work on the concept to find the mood which I want the album to transmit. That is what happens first, and I feel it is the most vital part of the work. After this I start recording ideas and work them out in detail until I am satisfied with the result. In the end, it has to fit my personal mood and my vision of the music. I work a lot with sound and I experiment a lot with frequencies and different approaches to the instruments used on an album which is what takes up most of the time. I want to have some low frequencies captured so that you can “feel” the music listening to it on a proper stereo and in proper volume. The music should connect to the environment listened in.

Jason: In old norse, the name “Fyrnask” means to grow old, to age, and in an interview elsewhere you said that it has a “half-historic, half-atavistic concept”, referring to a time when being and will were unsullied by the differences imposed upon the individual dependent upon their geographical, cultural, etc, location. How does your music seek to capture, to represent, or to embody this concept?

Fyrnd: The concept of decay is (among other subjects) very important. All the historic parts which are important to the music are somehow connected to the circle of bloom and swift decay controlling all processes surrounding us. I don’t want to romanticize past times rather than use historic sources to forge something spiritual far away from our everyday experiences. In fact this music is very “religious” or “spiritual” in the actual meaning of the word. It is highly “liturgical” and works mainly through symbolism.

I think this form of “spiritualism” is something that can be rarely found in the modern western society. Obviously Christianity was the last form of spiritism and mainly responsible to give our society the moral foundation and guidance. Christianity was replaced with simple worship and culture of consumption.

“Spiritism” can now often be found in form of new-age Buddhism and other concepts alike. I try to go back, to more primitive forms of “spiritism”… Something like a foundation for everything that cannot be represented by any kind of language.

Jason: Music is a very powerful medium for conveying messages – secular and spiritual. Do you think that music, something intangible and abstract, is itself imbued with a power to provide an avenue into these unknown or perhaps forgotten aspects of existence? Fyrnd: Firstly music is an emotional amplifier. However that is what I believe in. Working its magic it grabs you and forces its mood upon you. In the best case you’ll find yourself trapped in the mood driving the composer while the music was created.

For the messages: The music written by Fyrnask is quite primitive, in a way. It chants its own ancient gospel. And if a listener brings the patience that it takes, to become one with the mood of the tracks the messages and ideas that are presented on a superficial level are not too important. Of course, I hope that people get some of the ideas I try to convey.

There is this primitive core in this kind of music. I think that is somehow always connected to some kind of atavistic feeling. I believe that there is union beyond the artificial perception that results in something most of us call reality.

Jason: Black metal, a primarily antagonistic art, leans more toward the darker and evil side of being and existence for its inspiration yet it’s an area that remains without and perpetually resists definition. What do you think is so appealing about it? Does this void, so to speak, allow for greater creativity?

Fyrnd: I am not sure. I think black metal has always a lot to do with all kinds of “spiritual ideas”. It is also a very romantic concept, and has a certain tendency to be melodramatic. All in all, I do have to state that the brand “black metal” is not very important to me. The term itself is so filled up with ideas and different kind of concepts, that I am not sure what it actually should represent in the end. Maybe blast beats and satanic imagery? If that would be the case, I would find the whole genre, rather boring. I would avoid saying that any form of limiting to a certain genre, offers a greater form of creativity. The greatest form of creativity comes from having a large range of “musical vocabulary”, I would assume.

Jason: What does the future hold for Fyrnask? Do you have plans for more music? Shows? Tours? If so, do you have any plans to play in the UK?

Fyrnd: We do have live plans. Nothing too concrete here, but we are working on it. I will play where ever I feel I can transport the music in a proper environment, excluding some aesthetics, and a lot of the stuff that is going on in the current black metal scene. We’ll see. But the UK would be surely on the list too, if Fyrnask play dates in Europe.

Fyrnd: Thanks for taking your time for this interview. Thanks to everyone that is supporting independent music and art in general, in this day and age. Stay well all of you! Thank you, too.

And you can find out more about Fyrnask here: 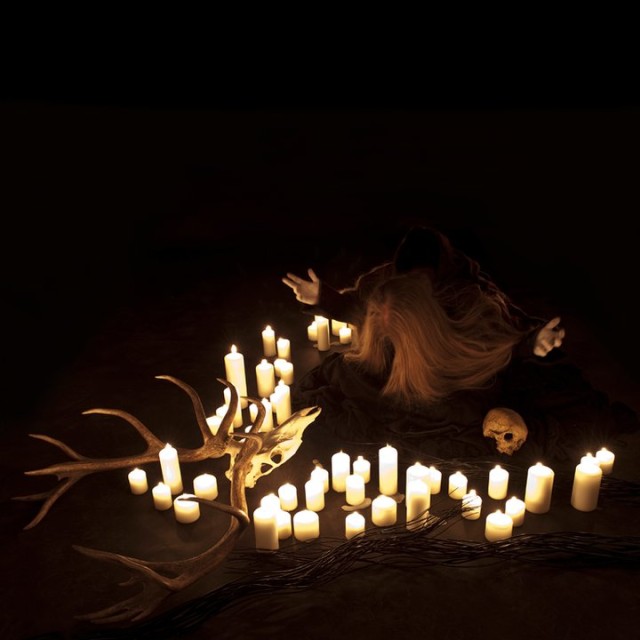