With their second album Exile released on 19 September, France’s Regarde Les Hommes Tomber further refined their sound with an unapologetically heavy piece of work. Here, vocalist Thomas talks to MR’s Jason Guest about the album, the band, surviving in the internet era, and the fall of man and punishment by God…

Thank you very much for taking time out for this interview and congratulations on Exile (reviewed here). To begin, can you tell us what wanted to achieve with Exile? Does it mark a progression since your 2013 eponymous debut?

It does! The main idea was to give birth to something heavy, panoramic, both oppressive and epic. Some kind of fresco, to picture perfectly the themes we deal with… in a more intense and extreme way than our first release.

Exile has been built following a collegial process, whereas the first album was composed by only one person, our guitarist J.J.S.. In that way, we worked hard to mix the ideas of each member during the writing sessions. The production is much more bigger in this album: Exile has been recorded, produced and mastered by Francis Caste (Studio Sainte Marthe, Paris), and he simply did a fucking great job… the recording process itself was very fluid and natural, a real pleasure. We are very proud of the final result, which is exactly the expected one. Everyone in Regarde Les Hommes Tomber put all his energy on this disc and we really hope that the listeners will enjoy it.

The concept of the band focuses on a main point: The fall of the men who are rejected and tortured by God despite their devotion and their love for the divine. This new album pictures both this fall and the birth of a consciousness that leads men to reject the Lord and all the principles of adoration during the Exile… to finally become their own gods and “sit on this throne”. All the lyrics evoke biblical mythology (Abel, Caïn, Lilith, the city of Sodom, etc…). Without any ideological message, I shall precise: We only deal with these themes on an artistic way. Those symbols are intense and highlight the concepts we want to show in our music, that’s why we use them.

The artwork for the album is beautiful. Can you tell us about it, what it represents, and how it relates to the music?

A city destroyed by the flames, a crowd condemned to Exile… The song ‘…To Take Us’ is about it: the cry of Sodom and the divine punishment inflicted on the sinful men. That myth is fascinating, although it’s not the only biblical one we deal with in Exile. That was obvious to paint it for the cover art… simply because this theme sums up our main concept, evoking something visually strong and darkly desperate.

Who’s the artist? Why did you choose to work with him/her? And how much direction did you give him/her in its design?

Like for our first release, Førtifem was in charge of the Exile artwork. We knew their work before this collaboration, we love their creations. Like for the production, we had a very precise idea of what we wanted: We looked for something that could, on the one hand, easily remind the first album, and on the other hand being different too. This continuity is very important for us.

They saw a gig in 2012 and made us a proposal we accepted. We don’t have “plans” for the moment… they work with passion and this is the most important for us.

I understand the band has been in existence since 2011, yes? Can you give us some background on Regarde Les Hommes Tomber, how the band formed, and its musical development?

We all play music for years, but Regarde Les Hommes Tomber was born in 2012. The band is composed of friends with different tastes, which is, I think, a true force. Some of us enjoy Black Metal, others are great fans of Hardcore and Post Metal… Actually we don’t consider that a musician shall listen only one genre, that’s why our music is a mixture of various influences. We trust the power of this diversity to build our sound.

We don’t have “direct” influences, but listening Regarde Les Hommes Tomber can evoke bands like Drudkh, Amenra, Wolves In The Throne Room, etc… Once again, we build our music without thinking of a model, we just look for the best way to deal with our concepts. And the fact that our country is full of good similar-style bands is a cool thing: we admire the work of Céleste, Deathspell Omega, The Great Old Ones, etc… each one gets something special and unique. They are great musicians, not rivals.

Can you tell us about the band name? What inspired it? And what does it mean to you?

It just sums up our all concepts in a powerful way. That’s why we took this name.

Some if not all of the members are or have been in other bands. What does this band allow that those other bands don’t?

Playing in this band is not so different than being in another one, you know… despite of the fact that we give more shows than with our side-projects! 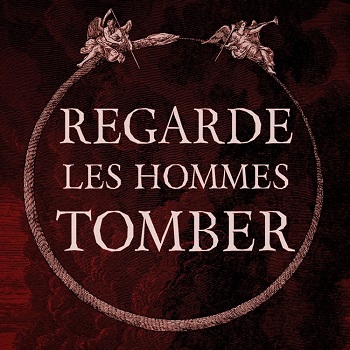 It seems that bands are finding it increasingly difficult to survive, particularly in an age where sales are down because of illegal downloading. How does a band such as Regarde Les Hommes Tomber survive in such an era?

People buy our merch, and we’ll never say enough “thanks a lot” for it. Actually we try to follow our own path, without thinking about the trends… we consider that following a fashion is the worst thing to do for a band, it destroys creativity. We get our own identity, people are aware of it and that’s why we get devoted fan who buy LP, CD and t-shirts. They’re conscious of the fact that this is the only way to “survive” for an underground band.

We hope one day! 11 gigs are planned in France from September to December (Paris, Nantes, Lille, Cannes, Bordeaux, Rennes, etc…), and one in Switzerland. We would be delighted to give more shows in foreign countries, our booker Kongfuzi works on it.

What would be the ideal setting for a performance by Regarde Les Hommes Tomber?

A simple room. Cold and absolutely black, without any natural light… only our light system.

What does the future hold for Regarde Les Hommes Tomber? Early days, I know, as the album has just been released, but is there more material in the works?

There is, but in this moment we don’t really think about the third chapter… playing live the songs of Exile is our priority!

We are truly excited to expose this new material on stage after all these months of composition/rehearsal/recording. We eagerly await to hit the road, play and meet people. Thank you for this interview, à très bientôt. 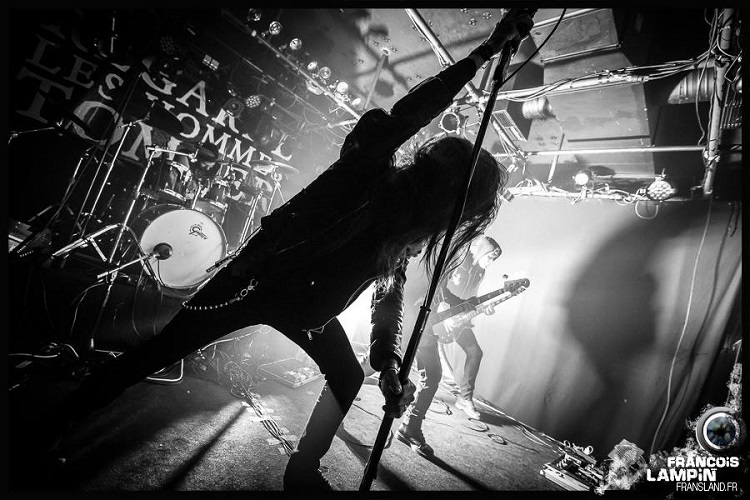