With new album Rites ov Perversion to be released on 16 September 2014 (reviewed here), AntropomorphiA vocalist / guitarist Ferry Damon talks to MR’s Jason Guest about the addition of new guitarist Jos van den Brand, the new album, its lyrical themes, their reason for covering Death’s ‘Open Casket’, as well as the video for ‘Debauchery In Putrefaction’, the effect of the ten-year hiatus between 1999 and 2009 on the band’s development and their worship of the darkly feminine.

Thank you very much for taking time out for this interview and congratulations on Rites ov Perversion. I was very impressed with Evangelivm Nekromantia (reviewed here) and the new album is fantastic (review coming soon). Since Evangelivm Nekromantia, there’s been a new addition to the line-up. Why choose Jos as your new guitarist? And what has he brought to the band? And rather than have a hired hand for touring, why did you choose to add a new member to the lineup? 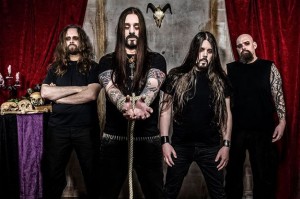 Our initial intention was to look for a touring guitarist, a hired hand. I mean the three of us were friends before we even started this band so there’s over two decades of friendship, views and opinions within this brotherhood. Jos was one of the names in this hired hand conversation; we knew Jos from the local scene and from when he played in Acrostichon. When we sat down with Jos there was an immediate connection on various levels. During our rehearsals and talks in the months after our first conversation everything seemed to fall in its place and he became part of the band before we even asked him. He is a very skilled guitar player and his presence adds to the atmosphere within the band.

When it comes to song-writing things have stayed the same, I still write all the music, there a couple of songs that are co-written with our drummer, Marco who is also the one responsible for most of the arrangements.

What did you set out to achieve with Rites ov Perversion?

We were very pleased with the outcome of Evangelivm… That album harboured the characteristics from our older work but was more groove-based and captured more atmosphere than our older and previous work. It was a good representation of where we stood as a band after such a long break but to me it also opened more possibilities as far as song-writing goes. What we wanted to achieve on Rites… was a natural continuum of that sound but refine and expand on it. We wanted this album to be violent and have a certain degree of catchiness like the memorable Death Metal albums of old. The inevitable progression you go through as an artist also played a part, all these things together make the album more dimensional and adds to the overall aesthetic and atmosphere of it.

Your second album, 2012’s Evangelivm Nekromantia was made up of three chapters that made up the story of the two women featured on the cover of the album. Does Rites ov Perversion have a story to it? If so, how is it reflected on the album?

Not in the same way Evangelivm… did. There are some tracks that can be linked together. ‘Morbid Rites’, ‘Gospel ov Perversion’ and ‘Tevfelskvnst’ are the three songs that find their origin in the same ‘story’ and are also the inspiration for the cover art. Otherwise the lyrics have their own theme and individuality.

They follow our lyrical tradition so they mostly consist of a sinister, occult, misanthropic and sexual nature. Since the inspiration can come from my personal spiritual beliefs but literature, movies, alcohol or other substances can be a vessel for inspiration. This time around I got even more personal on another level; ‘Crowned in Smoldering Ash’ addresses the depressions that have plagued me throughout my life; ‘Inanimatus Absqui Anima’ is written by our good friend Twan van Geel (Legion of the Damned / Soulburn) he used the rape of Kore/Persephone by Hades as a metaphor for his lyrics.

For you, how does Rites ov Perversion differ from Evangelivm Nekromantia? How has the band developed in the two years between the albums?

If I have to compare them I’d say that in my eyes, it holds more layers/dimensions and has more refined songs on it. There’s always this natural and inevitable progression you go through as a band and as an artist musically but I think we developed the most on a personal level within the walls of this band. Which is hard to explain to an outsider but Jos joining the band was a big part of that. We are all very passionate and obsessed with this band and that hunger translates into what we are doing more than ever.

With so many great tracks by Death to choose from, why did you choose ‘Open Casket’?

I can be very short about this. It’s the overall favourite from the Leprosy album for each one of us. And when we started playing it in the rehearsal studio it felt like a perfect fit. So why not put it on the record.

Dutch tattoo artist, Madeleine Hoogkamer designed the album artwork. What drew you to her? And how much freedom did you give her in its design?

Well, I had a clear vision of what I wanted to see visualized before we even approached anyone. We looked at several artists, Madeleine being one of them. We asked them all to present a sketch based on the lyrics of ‘Tevfelskvnst’. When she showed us her first sketch she hit the nail right on the head. So she was the obvious choice.

We all like the way she paints/tattoos/draws these female characters, they can be very sensual and sinister. The part that she’s also my girlfriend makes it easier in communication; she also picks up on my creative ideas and view on art. We gave her the freedom to paint this in her vision; she honoured the original idea and give it her own twist.

You worked again with Maurice Swinkels for the video for ‘Debauchery In Putrefaction’. Clearly you have developed a very positive relationship with him. How do you work together to create this visual aspect of the band?

It’s one of those things where you feed of each other creatively during the whole process. We are in the middle of pre-production for the video shoot for ‘Nekrovaginal Secretions’ at the moment. I give him the lyrics and tell him what images I see with the track, Maurice feeds off that and comes with great ideas that really add to the whole concept. We’ve been working on this project now for months, developing the storyline and the visuals.

We had a meeting few weeks’ back where we’ve talked over all our ideas and we now are working out everything to even the small details. We start shooting next week and if all goes well we’re going to have a video that will get everyone’s attention. We put a lot of energy and time in this one, it’s like with everything this band does we give it everything we got. Maurice gets that, I really respect his take on things and he’s a great guy to work with.

With its heavy riffs, monstrous vocals, and aggressive sound, death metal is considered a masculine genre of music yet AntropomorphiA’s artwork and videos feature darkly feminine characters that are very sexual figures that are objects of worship rather than sexualised or objectified. What does this feminine figure signify for AntropomorphiA?

That beauty and darkness and sometimes-even gruesomeness can be one. Women are beautiful beings and when they are strong characters that are surrounded with some darkness and perdition they intrigue me even more. Take the movie ‘Nekromantik’ the female character in this movie is very dominant and the scenes where she has sex with the corpse to me are more gruesome than when a guy would fill that role. Lilith but also literature about witches and female necrophiliacs and serial killers form a big inspiration.

AntropomorphiA took a ten year break from 1999 to 2009. Though you were still writing and recording music for the band during that time, when you got the band back together to play live and record again, how had the band evolved?

We progressed as artists, that evolvement is something you can hear on recordings that are made in the years we were on hiatus. We always had our own approach and look on Death Metal, never limiting ourselves to sounds and inspiration but we always honoured its musical traditions. We’re not looking to re-invent the wheel and people are going to compare you to certain bands because that’s what people do, even though we started out decades back, but I think we have our characteristic style which defines us. When you put on an AntropomorphiA track you immediately hear it’s AntropomorphiA.

We’ve gotten older and our brotherhood / friendship has become stronger within those years. The line-up is still the same but it’s like I mentioned in the previous question we progressed as artists within those years. We put the band on hold for different reasons but loss of hunger and passion for this band wasn’t one of those reasons. AntropomorphiA’s hunger is still growing that’s for sure!

What does the future hold for the band?

Getting more established within the scene and follow this path of our aspiration for global conquest.

Early days I know as the album is about to be released but is there more music in the works?

I’m always writing music but there are no concrete plans as for now. We are concentrated on the release of this album and we are eager to see where that will take us.

There was supposed to be a tour but I broke my wrist so unfortunately we had to cancel that. At the moment we are in talks with several bookings agencies and are working hard on getting out there to cast our Rites ov Perversions onto the masses.

Thank you for the interview! Behold the sway ov Death!