“There’s no use ‘being something’ musically just to reach the goal of fitting to the same mould as everyone.”

Hi Eld. Thank you very much for taking time out for this interview and congratulations on Dawn Under Curse (reviewed here). The album was originally to be released in 2012 through the No Sign of Life record label which ceased to exist just before its release. That must have been disappointing after all the work you’d put into it. Did you ever think that the album may not be released?

Yes, there were first some technical difficulties during guitar track recordings and then after making the album came the label issues. Naturally that all was a big disappointment after all the time and enthusiasm we all did put into making the record. When thinking of the fact that the bands current line-up was formed under a year before the recordings for full-length album started. From personal view I’ve also used several working hours for the artwork. It all took us really down but here we are. Anyway the setbacks brought us all here where we are now. We really have to thank Saturnal Records: Santtu, Juho and Arseny of the great and fair work with so much enthusiasm. After all that, the album was released on Monday 26 May and we had our first gig abroad earlier this spring at Satanburg III in St. Petersburg.

The album has a very coherent feel to it, as if all the tracks and each part was designed with a goal in mind. When you were writing the album, did you have a clear vision of what you wanted to achieve with the album or did it evolve as you were writing for it?

Dethrone (vocals / guitar) usually likes to write songs so that he ain’t using anything if it feels somehow uncomfortable. His idea is that: “If the song ain’t sounding good today, it ain’t gonna be on the next day or month either.” Dethrone really is into old heavy metal and epic bands like Primordial. Among the influences, it can be heard from his riffs that he really thinks them all the way in the end before taking them in use.  What is needed to be kept in mind when listening to Dawn Under Curse is, that last song that ends the record, was already heard on the second demo back in 2006. ‘Weak Flesh – Filthy Blood’ and ‘Unholy Redemption’ are from the time when Heinrich joined the band and the rest is finally put up together to its final shape during the existence of 2011 lineup. In the words of Dethrone: “They are unique pieces put together into a record.”

What are the lyrical themes on Dawn Under Curse?

Lyrical themes on Dawn Under Curse are around more old-school themes like war, blasphemy and hate in its various forms.

Who writes the lyrics? And where do they take inspiration from?

Dethrone and Heinrich have written all the lyrics on the album. I think the influences for their lyrical themes come from war history and anti-Christian views from through the years. Lyrical themes on the new songs come from my pen and are more metaphors brought from inside the anguished mind.

The band’s musical style incorporates influences from thrash as well as heavy metal. Rather than being a black metal band, does incorporating different styles allow the band a much wider form of expression?

Hellspirit is bound together with strong influences from the heavy metal riffs and epic foundation and legacy of icons like Bathory. Still… every band has to develop to its ‘own thing’ at some point. Old-School is still with us, and why not. On our 2013 Spring gig at Turku we played some songs from Venom as a birthday present for a dear friend with drunken choir of Hellbox members. On the older material there’s more clear evidence of that Destroyer 666 and Nifelheim records have been actively listened. About 10 years back I saw the first gig of Hellspirit at Työnkulma, Kuopio. Back then, witnessing the live act from the audience, and really much saw the band back then through Nifelheim and Mortuary Drape influences. The band already has a long and colourful history and during its existence has been sharing the same stage with such names as Archgoat, Nifelheim, Sabbat (JPN), Anal Cunt and Warhammer. What comes to the situation now – the road ahead is tempting more into the epic way and chances with wider expression. Still everything comes and goes with its own weight. There’s no use ‘being something’ musically just to reach the goal of fitting to the same mould as everyone.

How do you approach combing the styles when writing? Is it a conscious decision or do the tracks evolve organically?

Dethrone writes the riffs with a pretty merciless hand and like mentioned before, chooses those that he experiences to be fitting the best. Some songs have dropped away during the years of bands existence – others ‘cause of not fitting to the whole big picture, others haven’t just been feeling comfortable, for example when being played live. What I really like in Dethrone’s style is how he claims really much from himself, the creations and out of the band too.

Looking at the band’s history, the line-up settled around 2011. What is it about this line-up that makes it work for you all?

Long friendship. From the current line-up, Dethrone is the only original member from the beginning. The rest of the band have already more years together playing in few black and doom metal demo projects.

Can you tell us about the artwork? Who designed it?

I was the one with pen and paper drawing the cover art. Zetekh from Saturnal Records was the one with magick touch of Photoshop – giving the colour for the layout. As Dethrone describes the record with “Unique pieces put together into record”, I wanted to give it artwork that from my experience, looks like the songs and the band.

Images were built up in my head during band practises and while playing the songs together with band. Basically, cover art moulded the way I experience music of Hellspirit. About the cover and new logo there were many conversations with Dethrone. It felt really important for me to build up landscapes that describe the band and that they feel natural to use. All the way from the former demo band years it has felt really important to be able to produce the music into pictures. Especially because I am not a riff maker, never will be, so the pictures are gateway to expression for me.

Internet is one of today’s channels for the music, as for many other things too. For some people more important, for others less important; in this context, a good way to spread the word of gigs, new releases and to keep contact. Much news would be left unknown without that bridge to people’s awareness; same thing with finding new bands from all the areas of music field. Everyone listens to their music the way they want. Still the use of internet doesn’t bring the value of buying music any lower. It is a fact that too often today things like concrete books and records are forgotten. If people would every day read as many pages from books as what they click the mouse of their laptop – who knows… Maybe appreciation of real things would be more present. I think that especially among the underground people are really fanatic and dedicated with these areas of life. Whatever the genre is, formats like LPs and tapes are still close and to support bands that you honestly like feels really important.

We had this spring our first gig abroad at Satanburg III at St. Petersburg Russia, week after that we were playing in Helsinki at a Pre-Steelfest event in Club PRKL. 6.6. we have the Record release gig with Blood Red Fog in Tampere. Who knows what the future brings. Every event and festival organizer is totally welcome to take contact to Hellspirit and ask us to play in new places and events! We really liked to play at Russia and getting abroad again would be most welcome thing to happen.

What does the future hold for Hellspirit? Is there more music in the works?

Shorter release in form of 7″ EP would be great to get out in the near future. There are some new songs ready and two of them we have been playing at gigs this year, at Satanburg and at Pre-Steelfest. Hopefully the future brings out new raging live shows and new places where to play. Always great to get into new town – if possible, abroad again.

Thank you for the interview and many thanks to those reading, if you are interested in Hellspirit, get the record in your hands and digest it in peace. If you like it, be seeing you at the gigs – Finland or maybe someday in UK. 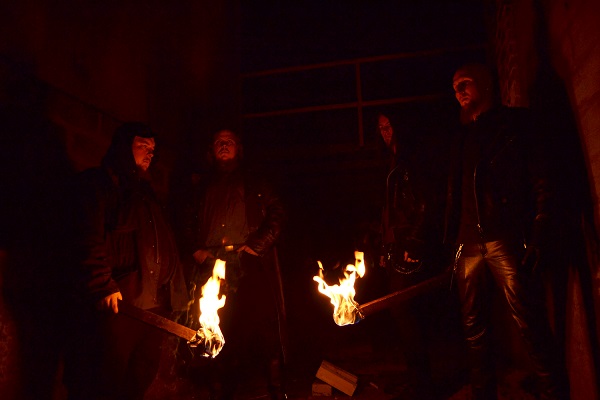