“that’s what the fucking terrorists want, that we’re gonna feel fear, but we refuse to feel it.”

Sweden’s Backyard Babies have returned from a five-year hiatus with what may be one of the most cohesive albums of their 27-year career. They started the UK leg of their European ‘Tour By Tour’ on Sunday – Ian Savage grabbed fifteen minutes with guitarist Dregen before the show to talk terrorism, side-projects and selfie sticks.

Dregen: Yeah, lemme see – yeah, five years, right? 2010 we did our last tour, we did a box set, coffee table book thing called ‘Them Twenty’, or ‘Them XX’ which was kinda like a twenty year celebration, then we took a break.

I: I was going to ask about that; you did what was apparently your most successful tour ever and then kinda stopped?

D: I know, right? If we’d have known that we would have taken breaks more often *laughs* but yeah, we felt like we were kinda running into a dead end in a way and we felt that if we didn’t take that break…I call it the longest holiday! We’ve been a band with the same four members since 1989 and we’ve never been able to live off our music from just record sales so it’s been like, touring, touring, touring, you know?

Back in the beginning it was a struggle about getting a record deal and things like that, so we were playing a lot from ’89 to about ’93, and then we got a record deal and we were touring on that; and then we got a little bit of success or whatever and we were able to pay our own rent and stuff – we only really started earning money from playing music in about ’97, ’98. So we’ve been kinda constantly on tour…and we figured that if we carried on like that we were gonna be a split-up band.

It wasn’t that we were getting on each others’ nerves…how do you say it in English, I guess we were kinda road-worn, just tired! I don’t know how to explain it, but it was like every rehearsal, you just wanted to get out…

D: Yeah, and it’s supposed to be fun to play! So we took a break, and we didn’t know if it was gonna be one year, two years, ten years…we knew that we were gonna play together again, it was just waiting for the moment when everybody was ready for it.

I: And of course you and Nicke took advantage of it to put out solo albums…and you wrote an autobiography as well?

I: Is it available in English at all?

D: No, it’s not – I’m working on it but I thought it would be easier to get it out in English! I guess that the book industry is kinda where the record industry was five years ago, it’s really going down…it’s available in Swedish and Finnish, but hopefully soon in English! And yeah, so I did that, and the solo album, and then three years with Michael Monroe.

I: Yeah, of course you replaced Ginger there and then Ginger’s guitarist [Rich Jones] replaced you…

D: Yeah, I told Michael, you know, that we [Backyard Babies] were having this break but maybe we’re gonna be back…you know, I miss those guys! That was a great band to play with but it was no hard thing that I left, it was just because we started the Backyard Babies again.

I: It seems Michael’s still got a good group of guys, obviously Rich and…hasn’t he got a couple of New York Dolls?

D: Exactly, he’s got Steve Conté who was in the Dolls and Sammy Yaffa, who was in Hanoi Rocks and the Dolls. Great guys.

I: So coming up to date, the new Babies album [Four by Four] – even from the first track it seems like a very obvious in-your-face reboot, was that a conscious thing? 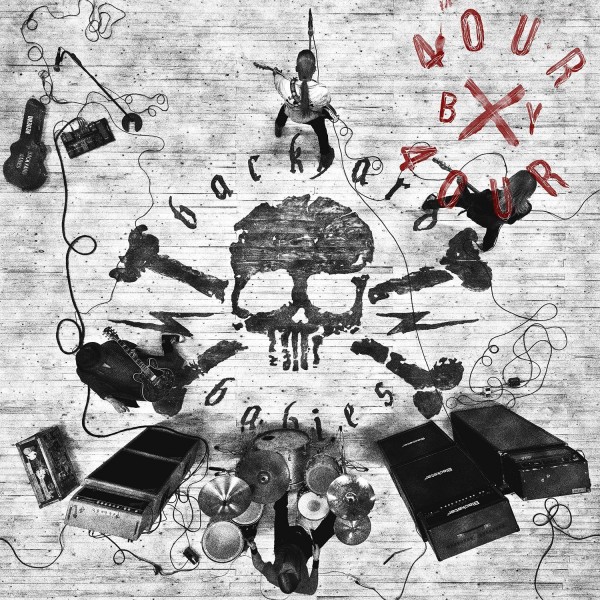 D: Kind of – it was a statement of…I mean, this album, we’ve never written an album so fast, and it was easy to record, it was easy to write, and I guess the break was good for us!

I: Although the last track on there, ‘Walls’, it’s very different to anything I’ve heard from you guys before…

D: I think we’ve done similar on other albums before, trying to throw ourselves out of our comfort zone and show the fans stuff that they might not know…that one started out as a kind of typical blues song; not boring exactly, but obvious. And all four of us are fans of instrumental music, movie music and stuff, so it turned out as kind of a Backyard Babies tune with a scratch of like Twin Peaks, Black Sabbath.

I: The recording was pretty easy as well?

D: Yeah, we recorded with Jacob Hellner, who did our last album as well in 2008; we recorded in Stockholm, mixed and recorded in the same studio. And Jacob of course is, like, the ‘sound’ of Rammstein, he’s their producer – although we don’t sound like Rammstein at all *laughs* but yeah, he’s a really easy guy to work with.

I: So the tour so far, you’ve been around Europe and…I have to ask, of course, Paris? [The Paris massacre happened two days before Backyard Babies were scheduled to play there]

D: I know…it’s been, probably the hardest touring week we’ve had in our twenty-seven year history, last week was just…crazy. We were in France when it happened, we were sitting in a restaurant and I’ve never experienced that kind of feeling, it was almost like…our generation have been spared from wars and shit but it almost felt like we were at fucking war, you could touch the atmosphere all over France. And then we were supposed to play in Paris two days later, and the show got cancelled; our promoter is still in a coma, four bullets through his lungs and shit…he’s still alive but he hasn’t woken up, so we don’t know.

D: Yeah…we have the same promoter as Eagles of Death Metal…and the lighting girl, she’s dead…she works at the club we were supposed to play; and the worst thing is that feeling, you know, ‘it could have been our show’. You know, it was kinda weird, we played Barcelona the day after that, and it was strange standing on stage, and…

I: You almost feel bad for having a good time?

D: Exactly! But that’s what the fucking terrorists want, that we’re gonna feel fear, but we refuse to feel it. But it was kinda strange, standing onstage and someone walks in the back of the room and it’s like ‘who the fuck is he?’. Crazy. And we played Holland yesterday, a festival where Eagles of Death Metal were supposed to headline, we’ve never played any place where the security was so tight, they went through every single case before we entered, for every single band. It was us, Danko Jones, Dictators, Napalm Death, Obituary…it took hours.

I: On a brighter note, over the years you’ve toured with who I guess must be a lot of your influences; Social Distortion, AC/DC, Motorhead – did anyone surprise, disappoint?

D: You know, it’s weird – I’ve had that question before and I’ve been thinking about it, there’s musician friends of mine who’ve toured with their idols and been like ‘those guys are assholes’ *laughs* but we’ve been spared all of that, all of the bands we’ve toured with have been great. AC/DC, great guys; Social Distortion, you know, we still talk to them on a regular basis, we became friends. And some of the smaller bands, like Monster Magnet, L7 – we did like six weeks with them in the States.

I: Something I didn’t realise until I did the research for this – you actually auditioned for Guns ‘n’ Roses?

D: I did! I think DJ Ashba got it…I guess, it was Buckethead who was in Guns ‘n’ Roses, and he left, they were looking for someone to replace him. It was a great moment, I was in LA, and playing with Guns ‘n’ Roses for two days! Just jamming with them in the rehearsal place – I didn’t get the job, but y’know…*laughs*

I: So Backyard Babies are still signed to Sony, but you’ve kind of dabbled with the PledgeMusic thing…

D: Yeah, we did a box set of five 7″ vinyl singles, which is the whole [‘Four By Four’] album, and I’m kind of a fan of that Pledge model.

I: I’ve spoken to a few people about Pledge, obviously Ginger’s the most obvious who’s done very well with it…

I: Okay, last couple – has Johan found his selfie stick? [over the tour said item has been Twitter-reported MIA in mysterious circumstances after a number of potentially unflattering stage ‘selfies’]

I: Johan – have you found your selfie stick?

D: The thing is that sometimes, it disappears *laughs* you can buy one in, like, Seven-Eleven or something, I’m sure he’ll have one onstage tonight.

I: Last question – I’ve formulated a ‘Thirteen or Nothing’ drinking game, where you have to name thirteen things in a given category in a minute; Bruce Willis films, characters in a Star Wars movie, whatever, or have a drink.

D: *with some trepidation* Wow, okay…

I: Alright, one minute to name either your thirteen favourite albums, books or films.

D: Favourite albums. Okay…Never Mind The Bollocks, Kiss Alive, It’s Alive! by The Ramones…Blonde on Blonde, Bob Dylan…erm…Appetite for Destruction, Nevermind by Nirvana, Space Age Playboys by Warrior Soul…um…Demolition 23, Damned Damned Damned by TheDamned…erm…LAMF, by The Heartbreakers, Sticky Fingers by The Rolling Stones, Check Your Head by The Beastie Boys, and…fuck, there’s no girls! Okay, this might be not so cool to say, but…Back to Black by Amy Winehouse.

I: EXACTLY one minute. Been great talking to you, thanks!

D: Wait, does that mean you drink, or what? *laughs* 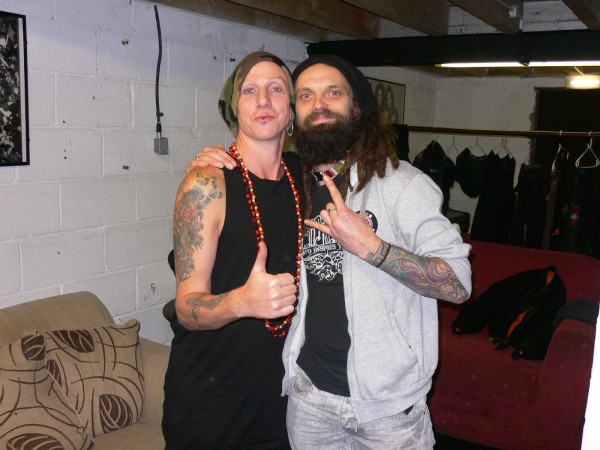