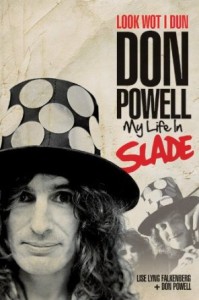 Most musicians have a story or two to tell. Some are even interesting or even amusing. Don Powell, legendary skinsman with Wolverhampton rock royalty Slade, has more stories and anecdotes than you can shake a pointy, stripey (drum)stick at. The fact that he can remember anything at all is a miracle in itself, following a devastating car crash in 1973.

Don has teamed up with Danish author Lise Lyng Falkenberg to write a detailed account of his life in a new book ‘Look Wot I Dun – My Life In Slade’, which includes painfully frank accounts of Don’s battle to cope with amnesia following the car crash, of his serial womanising, financial troubles and of his spiralling descent into alcoholism.

Everything that has gone before leads us to where we are now. Don and Lise Lyng Falkenberg, author and confidante of the great man, explained more as Midlands Rocks briefly caught up with them at the recent book signing in Wolverhampton.

MR: Thank you for joining us at Midlands Rocks. The book is officially released on Oct 14th, are you excited?

Don: Absolutely, Lise is the brains behind the book, it’s all down to her hard work. Lise?

Lise: Oh very, it’s been a long journey but it’s great to see it all come together like this.

MR: The book has been a long time in the making, how did it come about?

Lise: Don and I met in 2005 and immediately hit it off; Don was such a character with lots of stories to tell so I suggested that we write his story. We got together all of his old diaries and then got together every month to discuss new material, we must have 40 or 50 hours of interviews on tape that we had to go through and fit into the book. I also spent a lot of time in the UK chatting to Don’s sister and to friends and family to fill in the gaps.

Don: We know each other really well and I trust her judgement totally, I wouldn’t have trusted anyone else with writing the book.

MR: Tell us about the book.

Don: The book is a warts and all account of my story. I didn’t want anyone to read the book and feel that I was holding anything back; everything about me is in there. Lise put the book together from diaries I used to keep, it was a tradition for my sister Carol to buy me a diary every Christmas and because of my memory problems, I wrote everything down in the diaries, no matter how trivial.

MR: Did you feel that getting it all out there exorcised a few ghosts from your past?

Don: Absolutely, getting it all out there definitely helped.

MR: It’s one thing when you read your diaries and another thing when you were talking to Lise, but did it give you a new perspective on how big Slade were at the time and how mad things were?

Don: It did yes, I would read through the drafts and think ‘whoa, did we do that?’, surreal. I hadn’t really read the diaries so there were a few surprises in there for me as well!

MR: Did you run the book past the other original band members before release?

Don: No no, it isn’t that kind of book, there isn’t anything in there that would hurt anyone’s lives or anything like that. I just wanted to tell my story, to get it out there.

MR: And the turnout today, both here (at the Connaught Hotel) and at Waterstones?

Yes, I’m overwhelmed, look at all of these people! Good to see so many friends I haven’t seen for years as well, fantastic.

MR: Don, good luck with the book, and thanks for your time.

‘Look What I Dun – My Life In Slade’ an unflinchingly frank account of the compelling rollercoaster story of Slade from the man-at-the-back’s perspective. For Don Powell, though, Slade’s success came at a price. Long time sober and settled in Denmark with an adopted family of his own, Don Powell’s story is a no-nonsense journey to the heights and depths of the rock world.

‘Look Wot I Dun – My Life In Slade’ by Lise Lyng Falkenberg and Don Powell is published by Omnibus Press and is available now from Amazon and all online retailers.