“There’s beauty to be found in the shadows as well.”

There are workaholics and there are workaholics. However, Devin Townsend is in a league on his own in that regard. Strapping Young Lad, Devin Townsend Project and Casualties Of Cool are just of the few projects he’s dabbled with the last couple of years. His latest endeavour is with everyone’s favourite alien, namely Ziltoid The Omniscient. Raymond Westland caught up with HevyDevy himself to probe his mind about everything he’s been doing lately…

What inspired you to put Z2 as a double album, part Ziltoid/part Devin Townsend Project?

Well, as bad as it may sound, it was actually a business-inspired decision. When I told the management and the people in my band that I wanted to launch a massive multimedia project centred around a puppet which would cost a 100 grand, they asked me to include an album which could be sold under the DTP moniker. We’ve put a lot of effort building that name into a profitable franchise by touring relentlessly the past five years. At first I just wanted to do the Ziltoid album as a single entity, so when the management asked me to include a DTP-styled album I said I could do it in a heartbeat. Of course I knew it would be difficult, I just didn’t anticipated how much of a pain in the ass it would be. It’s a good pain, mind you, but still a pain in the ass (laughs).

The recording process for Z2 was a logistical challenge/nightmare to say the least. Can you talk us through the challenges and possible setbacks?

I use the word challenge or nightmare depending on whom I’m talking to (laughs). It was a logistical nightmare, yet I’m very proud that I’ve managed to hang in there. In the past I would have bailed out just like I did during the Physicist recordings. Although Z2 was born out of less than noble circumstances I feel the record is a good reflection of what I was feeling and going through mentally at the time. Many of my records are a reflection of where I was in my life at that specific time. During the recording and mixing of Z2 I felt more anger and frustration than I anticipated. This is reflected in the overall heaviness and massive choirs of the Ziltoid album. Another thing was that I was really fatigued from the Casualties Of Cool recording sessions and from the relentless touring I did with DTP. Mixing a 2,000 person choir for the record was just one of the challenges (laughs).

I really wanted to challenge myself and I came up with this idea to let 2,000 individuals record their vocals and I would mix them together. It was a ridiculously over the top idea, but I wanted to do it nonetheless for the simple reason that I simply could do it. Mixing all those voices together into something manageable was nightmare, but it was an awesome thing to do (laughs).

Ziltoid seems be growing into a franchise of its own, complete with merch, radio show and whatnot. To which level do you want the Ziltoid franchise to grow?

You know, the pledge campaign for Casualties Of Cool was incredibly successful and there was still a ton of cash left after the recordings of Casualties album. Of course it could have been used to pay the salaries of the people who are working for my company or being used for tours and whatnot, but I really wanted to use for Ziltoid and build this whole multimedia circus around it, including a radio show. Recording those shows was really funny to do, but after seven episodes I’ve ran out of ideas. You can only say so many things about a song and doing the same joke over and over again gets old pretty soon. Moreover, I get bored with things really quickly and that’s why I work on so many different projects.

One my attributes is that I have this creative vision, yet I don’t have the idea how I’m going to achieve it. Usually, the end result is very different from what I’ve envisioned at first and that can be quite frustrating at times. In a way Z2 is the type of record, or records if you will, that people have come to expect from me. However, I’m not afraid to stagnate as an artist, because there’s a part of me that is still evolving and that’s represented by Casualties Of Cool. I’ll be going to Sweden soon and work on the second Casualties record. It’s going to be an interesting process to say the least (laughs).

Next year you’re going to play a massive show in the Royal Albert Hall in London. What can the fans expect?

The honest answer is that we’re still working on the whole concept behind the show, but it will do the epic over the top grandeur of the Ziltoid album justice. It will be great and hopefully it will put Retinal Circus to shame. It will be good fun, though.

One of your frequent collaborators is Anneke van Giersbergen. She’s almost like an honorary DTP band member if you will. Is she kind of a muse for you and what makes working with her so great?

She’s one of my many muses and she’s a dear friend. She’s really easy to work with and I really love her energy. I’m obsessed with beauty and I just love female voices. Anneke represents strength to me, not in a masculine way, but in a feminine way. She’s easy going and when you work with her there’s no drama involved. When I write music I usually write vocal lines in a higher register than I can handle myself and that’s where I invite female singers to help me out.

I worked with Che Aimee Dorval on Casualties Of Cool and with her I have another sort of working relationship than I have with Anneke. It’s still great, but the dynamics in our working relationship are vastly different. That’s the point when you’re working with female vocalists. We’re all married or in a relationship, so you have to find out what is appropriate and what isn’t. Finding that type vulnerability and letting go of my very controlled way of working will be the two major challenges on recording the next Casualties album. There’s a beauty as well in things that are less than perfect and that’s the lesson that I will hopefully learn next time around.

You’ll be touring with Shining (NOR) through Europe pretty soon. What are your expectations?

We’ve toured with Shining before and they’re great guys. I really appreciate Norwegian culture and Norwegians and Canadians mix very well in a tour setting, so we’ll probably share the same tour bus again, although everyone will mind their own business obviously. Jurgen Munkeby is a genius and I really appreciate his talent and musical vision.

At this point in your career you can do pretty much do whatever you want. What ambitions do you left?

Well, Z2 was a nice project to do and I’m very proud of the music, but Casualties Of Cool is really where my heart is at the moment. It represents me who I am at this moment and I hope that I’ll find the courage to let go of my obsessive controlling persona and that I’m able to let the album be less about me, but more about the music and dare to be more vulnerable if you will. There’s beauty to be found in the shadows as well. 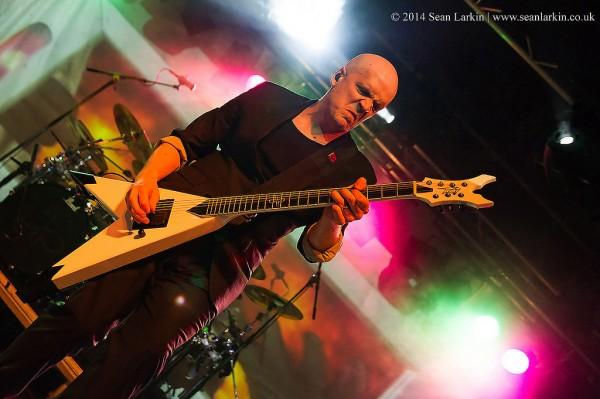