Glamour of the Kill are a band in the process of re-inventing themselves. With new album ‘Savages’ promising a partially new direction for the post-hardcore band, there is an added incentive to build upon the success that has seen them tour with the likes of Bullet For My Valentine and Dragonforce and play the main stage of Download Festival five years ago.

You’ve recently toured with Escape the Fate around America and Papa Roach in Europe. Do you think there is more to learn on these type of tours than there is playing your own headline shows?

Definitely. When you play your own shows, you’re playing in front of your own crowd so while you still have to give it your all, you’re not winning over newer fans. So on a tour like this one, people may be standing there with their arms crossed to begin with but it’s our job to change that. We just love touring, so it doesn’t matter to us really.

Where does this tour rank amongst those you’ve played?

It’s an awesome tour to be part of, especially because we haven’t played the UK for so long. It’s going really well, we’ve opened for some big bands in the past but it’s nice to be back after a year and a half. It’s also great how every show is selling out, it means there’s always a good crowd wherever we are.

You certainly seem to be playing in front of packed rooms, even though you’re the first band on.

Exactly, sometimes if you’re the first band you have to go on stage ten minutes after doors open, so the room is deserted to begin with. But either way, you just have to go for it and take the opportunity. 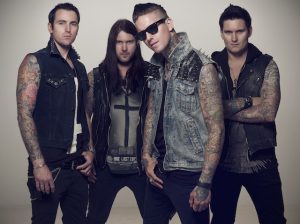 Your second album ‘Savages’ is released September 23rd, which songs are you particularly looking forward to your fans hearing?

We’ve been playing three new songs on this tour; opening with ‘Break’, ‘Second Chance’ which we released a video for recently and ‘A Freak Like Me’, which sounds different to the music we normally write because of the addition of synths. I just can’t wait for everyone to hear this new album, we’re so proud of it. We’re so grateful to have had the chance to work with a producer like Joey Sturgis who has worked with bands like Asking Alexandria in the past, and it was nice to get in there with Joey and sculpt these tracks into what they are now.

You referred to the video to latest single ‘Second Chance’ which came out a couple of weeks ago. How much input did you have to the overall creative process?

We knew we wanted it to be very dark. We were lucky enough to work with Robby Starbuck, who again has worked with Asking Alexandria amongst others. We share the same management as Asking, and Robby was great. The last time we toured America, we stayed in LA for a few days to record the video, which was a great experience.

Debut record ‘The Summoning’ was well received by critics, but how important is this to you, and do you read the music press?

I like to read everything that’s written about us. Outlets like Kerrang give us a hard time sometimes, but I think you can learn a lot about what people say about you.

Six years without a line-up change seems like quite a rarity nowadays. Is there a secret to not wanting to rip each others’ heads off while on the road or in the studio?

I think we just know each other so well. We went to school together and everything, it’s just knowing when to keep away from each other. A lot of bands don’t, which is why they argue, and that’s when line ups start changing and bands break up. But with us, we’re just very chilled out, we don’t really argue at all. Yeah, you’re on the road for two months at a time, and it can be hard and you can get tired, but you’ve just to man up I guess. We like to party and have a good time; they’re my hard-rocking amigos. If you fall out with them, you’re falling out with a best friend, you just don’t want to do it.

Glamour of the Kill tours are notorious for their extra-curricular activities. What’s the craziest thing that’s happened recently?

Not much that I can tell you really! We like to have fun, we take our live performances and song writing seriously but you’ve just got to enjoy it. Every night is a party.

Glamour of the Kill’s 2nd LP ‘Savages’ is now available through E1 Music via Amazon.