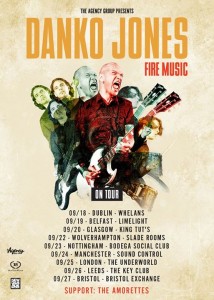 Paul Birch chats with Danko Jones ahead of tour dates in Wolverhampton on the 22nd Sept and Nottingham on the 23rd Sept. Tickets still available from http://www.dankojones.com/tour/

You’ve toured mainland Europe but not played the UK in around seven years. What is it we Brits did to offend our Canadian cousins?

We have played the UK several times in the past 7 years. In fact, we played London this past March. We haven’t toured the UK and Ireland in 7 years. There’s a big difference. The idea that we don’t like the UK and that’s why we’ve stayed away is preposterous. People only see the band so the onus is on the band. We play where we’re wanted and where there are offers to tour. In the last 7 years unfortunately nobody has offered us a tour of the UK. We can’t very well invite ourselves over. We’ll take a financial bath and cease to be a band, if we do. So, we’ve quietly waited until momentum picked up and offers came in again. Offers were made so here we are. Please let your readers know this bit of info instead of the false notion that we found something offensive and deliberately stayed away.

What’s response to the latest album, Fire Music, been like? Which tracks are likely to feature in your set list?

It’s been 95% positive which is something we’re not used to. Most music “critics” loathe our records so it’s been refreshing.

I actually enjoy playing all the songs we put in our live set. This album has a lot, almost 5 or 6 songs, depending on the night. The ones we haven’t played yet are being rehearsed and readied for set inclusion. If I had to choose, I like playing “Watch You Slide” and “Twisting Knife”.

Do you alter your live set dependent on what country you’re playing?  For example, have certain songs caught differing territories listeners’ attentions more for one reason or another; be that radio, cultural, or otherwise?

Yes, we do alter the live set a bit. If a country has heard a certain song on the radio that we haven’t been playing lately, we throw it in there. In Canada there are one or two songs that were released years ago that have become synonymous with our band but we never play them in Europe because they’re deeper cuts. When we go back home we always have to relearn them.

Your sound’s evolved over the years –  there’s a punk aggression there, pushing  classic hard rock driven chords with some meaty hooks that have increasing mainstream crossover appeal, as evidenced by ‘Dance’ being used on the superhero flick Kick Ass 2 and ‘Gonna Be A Fight Tonight’ featured as the official WWE Royal Rumble 2015 song. I’m presuming these are opportunities that present themselves, rather than writing to fit a medium, but is having your music exposed in such areas important to a modern working band with radio airplay increasingly limited etc?

Getting your songs on video games and television is a new thing to me. Something we never try to crowbar into our songwriting. We just write the songs and let the chips fall where they may. I guess it’s exposure but one can’t see hard numbers on a page. Sometimes people say they heard our song on a show but whether people were turned onto our band because of it is debatable.

You’ve recorded spoken word albums, given lectures, podcasts, held radio shows and obviously write the song lyrics – What is it about communicating verbally that appeals to you? Is this a need to express yourself and to what degree might you consider self-vanity to be involved? Are you concerned about being typecast or misunderstood? A multi-layered question to ask what drives a performer?

Live, with a power trio there’s no get-out clause, with little luxury to coast and rely on the playing of others. Have you always favoured that three piece set-up or was it circumstances that lead to the band developing in that manner?

We’ve discussed adding a second guitar player in the past but having the three piece makes the music raw and direct. It’s faster to write songs this way. It’s also the same amount of instrumentation as Led Zeppelin and Black Sabbath, so we follow suit.

Do you consider Danko Jones a band or your band?  John (JC) Calabrese has been on bass throughout, while you’ve had a few drummers down the years with Rich Knox the most recent. What is it that they bring to the table musically and as individuals?

It’s a band that bears my name. We make decisions as a band. It’s probably more of a democracy than most bands that start with the word “The”.

JC and Rich are consummate musicians. They’re better than I could ever be so it’s good to have that net. Singing and playing guitar for a hack is a tiny struggle.

How do you think they perceive you and your role?

That’s their question to answer.

What is it you’re looking to achieve on this nine date tour? Reconnect with your existing fan base, extend it? How much do financial considerations come into effect touring smaller international territories like the UK?

Every band’s tour is reconnecting with your audience and hopefully expanding it. Like I mentioned in your first question, money is a big factor for a band on the other side of the Atlantic coming to play and hopefully having enough to keep going. It’s the reason that we haven’t been able to come here for a while. I’m glad that UK press has been gracious enough to start covering us again and allowed our name to circulate more.

The Amorettes are supporting you on the tour. Are you familiar with them?

Never played with them before but they’re a great band. Looking forward to playing with them every night on this tour.

Last time you visited you were supporting Motorhead. Lemmy’s been suffering some serious health problems in recent years but keeps gigging. Realistically, is it right that we expect our favourite bands to rock ‘til they drop? Can a rock artist retire gracefully?

I think Lemmy is an exception. He’s a person who, I believe, wants to keep going ‘till the end. I don’t think there is anybody out there who could tell Lemmy what to do and what not to do. He’s gonna do what he damn well pleases.

After this UK tour, what does the future hold for Danko Jones?

We’re off to do a Scandinavian tour right after we finish in Bristol. We’re then doing a mainland tour of Europe in November/December.