MR’s Brady Deeprose delved some murky depths with Daniel Droste of German Funeral Doom merchants Ahab just before their headline show at The Dome a few months back.   After thinking the interview was lost forever, it resurfaced and here it is in its full glory!

Dan: Well thanks! It’s very hot here, but even hotter in Germany so it makes a nice change.

B: We’re struggling, I’m not built for this heat! Anyway, this is the first Ahab album in years: where have you been?

D: We always have a 3 year gap between records. It’s not like we’re instantly writing songs right away, we like to take a break afterwards to find the red light again and focus on a new book: we have to find a new book! This time, we jammed for a year and had almost 3 songs but discarded them after we found the text we wanted to use…it developed faster and faster from there.

B: What was it about The Boats Of The Glenn Carrig that drew you to as potential subject matter?

D: We’re always searching for books and we get a lot a lot of messages about it from fans on Facebook. We just saw a comment recommending ‘The Boats Of The Glenn Carrig’, read it, and knew it was the one. We also thought about doing Die Entdeckung der Langsamkeit (The Discovery Of Slowness), which had a cool theme but lacked lyrical ideas to build upon: we do like to write about the sea too!

B: After working with classics like Moby Dick, books that are so highly regarded and have had so many interpretations, how did you find working with TBOTGC and do you feel it holds up to some of your previous inspiration?

D: It might not be as famous, but it’s a good piece to work with. It’s always nice to see fans get back to us and say, ‘I have to read the book before I listen to the record!’ We like that people have that kind of dedication. It’s a good story and had a lot of potential for us to work with; we’re really happy with it.

B: When approaching a text for a concept album, does the band instantly have an idea for the sound of the record, or do you write at all before starting at page 1? 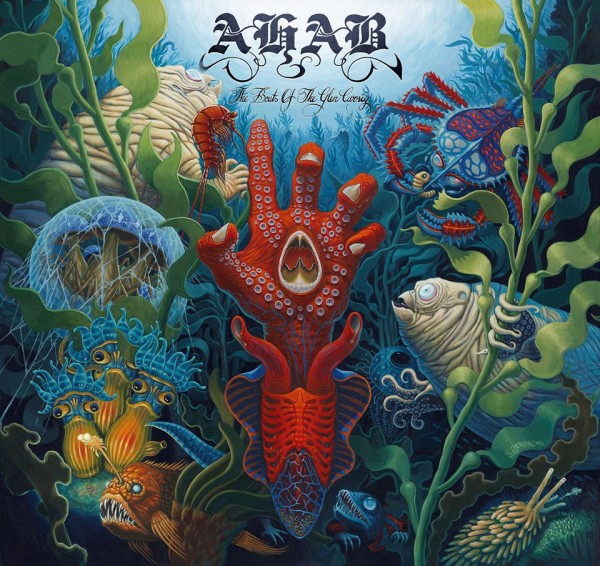 D: It depends. We always have our main influences: slow heavy parts, melodic stuff, clean vocals etc, and then around that, we try to develop the music around the story so that, to some extent, the music reflects the lyrical content.

B: Are there any tracks on the record that you’re particularly proud of or more excited to play live?

D: It’s still too fresh! Actually, today will be the first time we play anything from it live. We’re just playing ‘Red Foam’. We haven’t had a chance to rehearse all the songs as our drummer is living miles away and has two other bands…today was the first time we rehearsed the song with vocals! I’m glad it worked!

D: It’s different. The first record was like an experience, we just wanted to do it. Chris even said, when we started, ‘Okay, let’s just do this band as a project and never play live.’ We then got this big offer from a doom festival in Germany which is sadly no longer around, but it was awesome: just doom bands playing in a chapel to about 500 people. We were blown away and though, ‘Yeah, we need to play live!’ Our drummer joined after that and we were then faced with following up the first record which, after the reception it garnered, was really daunting. I wouldn’t say it’s easier, but it’s definitely different.

B: How did you guys progress doing essentially a bedroom project to being at the forefront of the European doom scene?

D: The first band I got into with this kind of music was Anathema’s Pentecost III…I had no idea what the genre was but I just thought, ‘Why isn’t there more stuff that sounds like this?’ It’s still one of my favourite records to this day. But yeah, I just recorded one song at our former bassists small studio, where we also recorded Call Of The Wretched Sea and yeah, I played with Chris in a former band and we’d all done death metal before…we just wanted to do something new. It had to be slow and heavy. One day he came to me and said, ‘what about doing a project about Moby Dick? Doom music, in the style of Tyranny maybe?’ I said, ‘I have a song’ and we traded some ideas and got this demo together. It was really weird, we just brought maybe 30 or 40 copies to this festival and sold most of them before we played! We only had one song online and yeah, with this kind of music which isn’t very popular, it was incredible. Now we’re here!

B: That said, while playing such an ‘unpopular’ genre, you’ve been able to travel internationally to play to big crowds! Is this something you thought was even possible?

D: I can only talk from my point of view, but in the beginning, we thought that festival would be the biggest thing we’d ever play…so now we’ve played festivals all over the world, it’s pretty crazy. Hellfest last week was amazing. Before I just knew that the billing was monumental, but to see Alice Cooper at 4pm or Mastodon at 5pm on a small stage…it was so cool. Immense fireworks every evening and statues…they put a lot of effort in, it was really good.

B: Going back to the record before we just discuss festivals all night, I’ve noticed that there’s more of a sludge influence to the sound, is this something you were aiming for?

D: No, not at all. It’s like, a natural development. We just do what we want and other people say, ‘Ah, that sounds like whatever’. For example, there were parts on The Giant that people say go more into post-rock, but we never had the intention of doing that. The only record we intended to have a specific sound was the first one, we wanted to record a funeral doom album. The rest has been more of a natural flow: it just happened.

B: The lineup for tonight’s show (Ahab, Esoteric and Darkher) is a real treat for doom fans, are there any other bands on the scene that you guys are really into?

D: Yes of course. I’m a massive fan of 40 Watt Sun. We’re all really into My Dying Bride…The Light At The End Of The World is one of my favourites. What else? Esoteric! It’s weird, Esoteric are one of the bands that inspired us to start playing doom, and then we got to tour together: it’s crazy!

B: Different genres have different expectations when it comes to touring…for example, you’d expect beers and carnage on a thrash tour. What’s been the norm in your experience of ‘doom’ tours?

D: It’s nice and relaxed! Most of the time it’s just being out with whoever but we’ve been lucky enough to choose the bands we tour with lately…we didn’t know Esoteric personally but we were obviously massive fans so that was an easy choice. It’s a really nice scene with normal people, we’ve never encountered any of that ‘Trve Black Metal’ type elitism. Just cool people that like music. There are no ‘big stars’, everyone is cool.

B: After 10 years, what is there left for you to actually do? Places to play, festival you’ve always wanted to get on?

D: It’s hard to say. We’d like to do a small UK tour as this is actually only our third show here, second in London, and we did Damnation Festival last year. We just want to get out to places we’ve never visited before. We get a lot of questions about touring in the U.S. With the merch we sell, the most is in Germany but second is the U.S. so there seems to be enough people interested in us…but it’s expensive. We’re not expecting to make any money, but you have to pay for flights and working visas etc. We’re a long way from being able to live from what we make but we’re able to buy gear and pretty much cover our costs: it’s a hobby that pays for itself! And it’s nice that we don’t have to do it, we can take our time and it means it’s always fun and exciting. We’ll have a show at the weekend, then two weeks break, then another show…it’s good.

B: Have you done many ‘intense’ tours?

D: We’re all working full time so to do more than 10 to 12 dates isn’t really practical. It’s difficult and you have to work it out with your work colleagues.

B: Where do you work?

D: I work as a therapist with disabled people.

B: Wow, a bit of a departure from fronting a doom band!

D: Yes of course, that’s the point! This is like, an escape almost, from the day to day.

B: Hopefully, that ‘day to day’ won’t keep you away for two long before the next record! Will we be waiting another 3 years?

D: The thing is, our label said, ‘Hurry up, hurry up! We need a new record!’ but you just need to see what happens. It’s never been our goal to be as fast as we could: even if it takes us 5 years next time, that’s it! We just have to be happy with the result.

B: With so much material that you seem intent on adding to, and with the lengthy nature of doom tracks, how on earth to you go about picking a setlist?

D: We have our kind of ‘standard’ set, and we try to keep at least one song from every record…it’s always a discussion. For example, we never practiced the new record in the rehearsal room, like I said, ‘Red Foam’, first time today. We recorded bass and drums together and then both guitars together…the songs should work live. But the vocals were very spontaneously done in the studio…so I’m not sure how much of it works while playing guitar! Our drummer, when we heard the record was like, ‘How the fuck are you going to do this!’ and I said, ‘I don’t know, let’s try!’ and it worked today. It’s always the balance between what we like best and what the people want to hear. (Do you have a favourite song?) I’d say probably ‘The Divinity Of Oceans’ because it presents the bands overall sound best…from the new stuff, it’s still too fresh and hard to say!

B: We’ll give it another year then! Next time you’re in the UK, we’ll do an interview and I’ll ask you the exact same questions, see how much is the same! It’s been a genuine pleasure to talk to you, thanks for taking the time out of your day.

D: No problem at all.