“You can still have a good time, but no-one dies!”

The Wildhearts recently embarked upon their first UK tour since the 20th anniversary of ‘Earth vs The Wildhearts’; Ian Savage grabbed a few words of wisdom from guitarist CJ about curry, promo gimmicks and ageing gracefully before the opening show in Wolverhampton.

The first question every fan’s going to want to know the answer to: does the reformation mean a new album?

At the moment, no – I mean, we’re doing this tour, we’re doing Download, and we’re going to tour again next year because we’ve got a couple of anniversaries coming up, we’re thinking of doing something around them. There’s always an album on the cards, it’s just when we’re going to do it. It’s just…it might be two or three years’ time, but an album WILL be made.

There’s a lot of tremendous albums being toured on the ‘anniversary’ ticket lately…[‘hearts 1995 album] PHUQ?

We’re talking about it – you know, it’s a no-brainer! We’d be stupid not to do it, but with The Wildhearts, it’s kind of like a game of chess, you have to get everyone in the right place at the right time and it’ll happen. I’m well up for it…

I guess ‘Fishing For Luckies’ [1994 fan-club only album] has been re-released to death..

Yeah, and Download’s my last show for about six months! Then I’m free to go again next year, I don’t think there’ll be much happening after June…

This is the ‘Mabel’ [CJ’s solo album] release?

Cheers; I’ve got a baby due in August, but ‘Mabel’ drops in June as well, and I’ve got some acoustic shows, I just wanted to take at least four or five months off around when my baby’s due to not be away from home – to be a father.

It’s my first gig, you know [the baby]; I’m working on a cookbook which I hope I can release and another chilli sauce, to go with my first one, the Deviltspit…

I have heard tell that you’re the band cook, Ritch has referred to ‘messipices’…

Actually, Scott’s a chef! I’m an enthusiastic cook, everyone knows that I can cook – I’m a curry man so I’ve always wanted to do a cookbook, but sauce is my thing, I’ve got another two different sauces coming out.

Back to the current tour – the last one was ‘Earth vs’ in its entirety and then fan-chosen tunes during the second half, anything we should be looking forward to on this outing?

There’s definitely stuff in there that we haven’t played live before, it’s a different set – I think people are going to be quite surprised, in the first half there’s some stuff that’s a bit obscure. The second half is the bits that people want to hear, as a band we’ve never played a setlist like this before.

The lineup has kind of skipped around less over the last ten years or so – is this the group of people who work best as ‘The Wildhearts’?

Yeah, The Wildhearts should always be me and Ginger, Ritch on drums, and I guess we have the revolving door with either Scott or Jon on bass; I think he [Jon] is off in the Caribbean right now on some prog-rock cruise…

I suppose they don’t call him ‘Random’ for nothing…

Well, yeah, I think he’s in Miami – Scott’s here, he’s there, I don’t know which of them’s playing Download!

Ritch has retired more times than Rocky Balboa, what do you think keeps him coming back to The Wildhearts?

You know, it’s The Wildhearts, isn’t it? It’s out first big band, and…I retired for four years. I stopped, I didn’t play a note, didn’t do a gig for three years. After Chutzpah, our last big tour was in 2009, I didn’t start recording music again until last summer. It’s a long time to be off…

So coming back up to present day, what’re you looking forward to, gigs-wise?

People turning up?!? *laughs* I’m just looking forward to getting out there and doing some good shows- I mean, we’re a bit under-rehearsed, and Ginger and Scott got held up in traffic [tonight] so we haven’t soundchecked, so it’s a bit on-edge, but we’re used to it, you know; I don’t tour any more, and the same with Ritch, he said “this is out first tour of the year”. And for me it’s the last one until next year, but it’s a little bit of a holiday…I haven’t had a day off in months. I’ve got a day off on Friday in Manchester, so I’m looking forward to just chilling out, so I can just sit down and not have to worry about things, get a curry…I had to come on tour to get a day off! So that’s what I’m looking forward to *laughs*

So any tour pastimes, habits, rituals or anything you’d care to share?

I think we’ve all kicked the worst of our habits, which is good! It’s kind of coming of age; everyone still likes a good drink, but we’re a different kettle of fish now… I mean, when we were kids we were a bit like headless chickens, anything and everything was cool, but we’re now approaching fifty so you kind of act accordingly…

Yet there’s not a wrinkle on you!

Well, I’m 46, coming 47, and there comes a point where… you know, you can still have a good time, but no-one dies! I guess that’s just what you do when you grow up, we’re all still having a good time.

The Wildhearts have either launched or given support to probably hundreds of bands over the years: The Darkness, 3 Colours Red, Eureka Machines, Baby Godzilla, and all of the side-projects like Sorry and the Sinatras, Honeycrack, Grand Theft Audio – do you ever feel like the Corleone family of British rock?

*laughs* Yeah, the family tree is really interesting when you look at it – I guess when we came out all the bands that were really with us at that time, a lot of them have fallen by the wayside. Some of them are still out there playing, but we seem to be still be able to do these mid-sized halls, and there’s always still kind of a buzz about us, it’s kind of nice that we still have this youthful spirit running through the band. You know, we’re not kids any more, but there’s still that kind of urgency, that punk rock strut to the way we do things, and you can see it; I mean, you don’t have to be a fan of The Wildhearts to realise that there’s a certain anger thing going on there, there’s an edge.

Yeah, we used to be like a blended Scotch whiskey but now we’re like a fine single malt.

What are you guys listening to on the tour bus at the minute?

Well, the bus only turned up today so I’ve no idea *laughs* the bus has two lounges, one’s a chill-out lounge, one’s a party lounge and I have no idea…we play everything on the bus, from Motorhead to Snoop Dogg, from The Prodigy to The Bangles, from Pantera to The Clash, ABBA…you know, the list goes on and on, and it depends, you know, if we want to party we’ll put party music on, if we want to chill there’s some chill tracks.

You’ve had some pretty cool promo gimmicks over the years; the Sick of Drugs grass mat, passport and wallet packaging – is there anything another band’s done where you’ve thought “I wish we’d come up with that”?

Ummmm… no? *laughs* I’m trying to think, man, but you can have every gimmick in the world and if you haven’t got the music to back it up you’re fucked, aren’t you?

Last question, just for you: what would be your perfect day?

Perfect day? Right, I’d wake up and it would be baking fuckin’ hot – I’m not talking 60 degrees, I’m talking 80s, so hot that most people in Britain would find it uncomfortable – and it’s humid, and you can’t get to sleep, and everything sticks to you, right? And I open my windows and I see a beach, with palm trees and there’s crystal-clear water and there’s some dude cooking me a curry, man, and I’ll go out there with my missus and we’ll have a curry and we’ll sit there on that beach all day long doing fuck-all. THAT’S my perfect day. 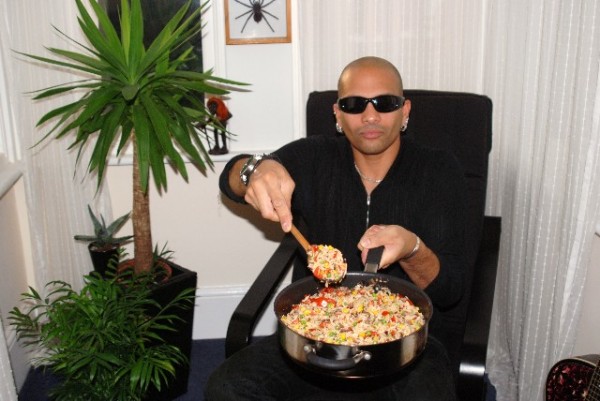