These people don’t like us, what the fuck’s going on?

About half an hour before doors opened to the Less Than Jake / Yellowcard show in Birmingham last week, a very stressed-out tour manager escorted MR’s Ian Savage to have a chat with the soundcheck-fresh Chris DeMakes (LTJ frontman and guitarist) about touring, crowdfunding and life in general…

It’s only the second date but I can kind of answer that because we started this tour in the States, we were over there for five weeks and we had like six days off, then we hopped over to London, and here we are! Everyone’s heathy, happy and crazy as ever!

2015 marks the 20th anniversary of Less Than Jake’s first album [‘Pezcore’], and there seems to have been a glut of 20th and 25th anniversary reissues lately – was it even discussed?

No, you know, we’ve re-issued Pezcore, we started our own imprint called Sleep It Off Records some years ago and we re-packaged it with artwork and we re-released it, so I don’t think there’s gonna be anything in lieu of that…there’s no, like, extra demos or anything from that era that we could put with it – and at the end of the day people don’t really give a shit about that kind of thing anymore! I like to collect records and stuff, but, y’know, the majority of people will think “I already have it…”

Yeah, and for us it’s like…it’d cost us money to print everything up and who knows if anyone would even buy it?

Vinnie mentioned in our last interview being more comfortable with a ‘little-and-often’ approach, recording and releasing EPs and touring them rather than spending a year making an album – what’s currently in the pipeline?

Well, it [recording EPs] worked at the time and then we had kind of a cohesive idea for the last record, See The Light, and that record was interesting, we put that out as a full-length and…I mean, who knows what we’ll go back to next? I have no idea, it’s just really cool having the freedom to do whatever we want.

You’ve recently put out a ‘Live on MiniDisc’ four-volume live set, which I was disappointed to find out isn’t actually on MiniDisc – what’s the story with that?

People have actually mentioned that, they wished that the thing was on Minidisc – but you must be one of only a few people who even has one of those players, I don’t have one! *laughs*

What do you guys listen to when you’re writing and recording, is it different from the tour-bus playlist or does everyone kind of do their own thing…

Everyone kind of does their own thing, I kind of have my certain stations on XM radio that I listen to, and every once in a while I’ll plug in an iPod and whatever comes up on shuffle I’ll listen to; I think that everything influences me but I wouldn’t be able to pinpoint any one thing.

You wrapped up a US tour with Reel Big Fish and Authority Zero a couple of weeks ago; how does a US audience compare to a UK one, do you notice a difference once you’re onstage?

Um…y’know…I wanna say there’s a difference…I think people are a little rowdier here, probably because the alcohol consumption’s up a little bit from back home *laughs* but they’re both great in their own way.

Are there any countries you’ve never had chance to play that you’d like to?

There’s quite a few – we’d like to get over to Indonesia and some of those kind of areas, the Phillipines, China, South Korea, a few of those countries.

From what I hear that’d be the opposite of a UK audience, aren’t they supposed to be very quiet and polite between songs?

That’s Japan! Their thing is that they grew up speaking English as a second language, so often their English is quite broken – although their English is way better than my Japanese, of course – so between songs they actually want to hear what you’re saying so they’re very quiet. And when we were out there it took us a tune or two…we were like “these people don’t like us, what the fuck’s going on?” *laughs*

Less Than Jake still seem to have no fear of hard touring 23 years in – do you have any tour rituals or habits that you abide by?

You know, just…try to have as much fun as you can without going overboard? Drink a shitload of water, be a little choosy about what you eat, I take vitamins when I’m on the road…back home when I have a shit I don’t wash my hands, but HERE I gotta *laughs* I got pink-eye and shit when I’m at home, all kinds of fucked-up shit *laughs*

What would you say is the single biggest thing that you’d miss if you became one of those ‘an album every couple of years and come out at festival time’ bands?

Um…I can’t exactly answer that but I will say – there’s been times where we’ve decided to have a break for two months or three months or whatever, and after two or three weeks you get that itch to wanna be back out here; y’know, I’ve spent over half of my life on the road – I’ve never hung my toothbrush up in the bathroom! I live out out of a bag…

Do you even bother to unpack the suitcases?

No, I don’t – I had an ex-girlfriend who hated it, she was like “You’re home now, you’ve been home for fucking ten days!” *laughs* and I’d be like “no, give me toothbrush back, I’m putting it in my bag!”

Quite refreshingly Less Than Jake don’t seem to be one of those bands that bombard social media all the time; do you use it much yourselves, personally?

It’s funny you should say that, because we get some guys who’re like “you’re using too much social media” and we’re like “well, fucking unfollow us!” *laughs* But yeah, we’re very involved in it for what might be called an ‘older band’ – we had a promotor recently, someone we’ve worked with for about twenty years, and he was like “I can’t believe that your social media really helped out this show!” and we were like “what you’re actually saying is “For a band your age…”” *laughs*

But yeah, we think we do a pretty good job of it, kind of treading that line – you don’t want to bombard people but people are being hit with so much stuff all the time that you gotta get ahead of it.

You’re playing with Yellowcard, a co-headline tour – who’s topping the bill, or are you alternating it?

We played last last night, so they’ll be playing last tonight – yeah, we alternate every night.

Yellowcard were launched by Vinnie’s Fuelled By Raman label – I have to ask, is it pure pride to see them up there or is there a little bit of “don’t fuck it up, boys?”

No, we’ve known them since they were kids; they’re from Jacksonville which is about an hour from Gainesville where we live in Florida, so we knew them before anyone around the world knew them, I guess – they’re good guys, we’re good friends with them.

How did you come across [opening band] Chunk! No, Captain Chunk!?

They had a good buzz around them, we thought they’d be a good band to add to the bill – check ’em out!

How do you decide on support bands? Is it always 100% band-chosen, or are there outside influences?

It’s 100% our decision; sometimes an agent or promotor will suggest a band to look into, but we know most of the bands now so y’know, it’s hard to suggest somebody we’ve never heard of so we do get to pick who we want to go out with.

What’s your take on the crowd-funding approach to releasing records?

I never say never with this band, because I’ve never wanted us to limit ourselves or paint ourselves into a corner, but for us, I don’t know if we would ever do that…y’know, we pay for our own recordings, it’s our money that we put into it, and you get out what you put in. I know a lot of bands who’ve done the crowd-funding thing, and sometimes you get fans who feel ripped off, like they didn’t live up to the obligation, and…who the hell knows, maybe one day we’ll ask the fans for the money to do something, but it doesn’t seem likely.

If time, geography and mortality weren’t an issue, what two bands would you want to take out with you on tour?

Um…Black Sabbath – from 1971, when Ozzy was on fucking fire…and the other band…it would have to be the Beatles! Just for shits and giggles, and because they were the biggest fuckin’ thing in the world…well, they still are…yeah, 1965, 1966 Beatles.

I’d pay to see that! Last one; according to Wikipedia Roger and Vinnie are both collectors of Pez dispensers – is there a rivalry?

Not really, a friendly rivalry if anything – the funny thing is, since we named that record ‘Pezcore’ people would throw up Pez onstage, and my guitar tech would collect them up, put them in a box and at the end of the tour he’d give them to me…now I probably have around two hundred that’ve been thrown up over the years, I’ve got my own collection! *laughs* I didn’t have a collection, but I figured ‘What the hell’ and by the end of the tour I was like “I already have a Batman, I already have a Spiderman…oh, I don’t have this one, cool!” *laughs* 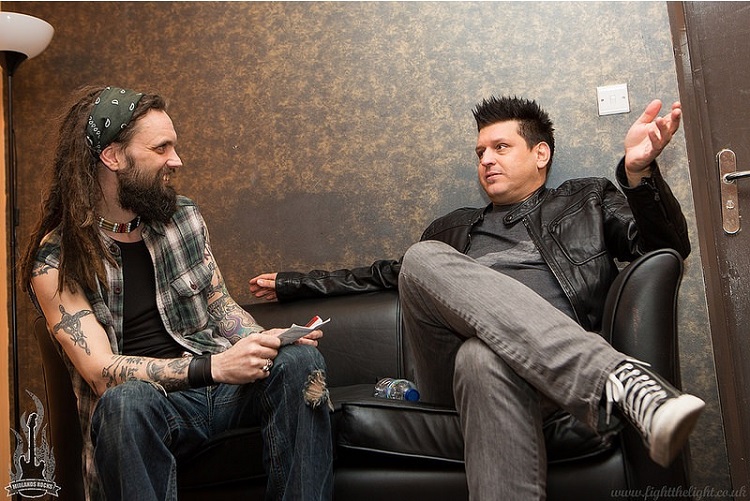