Festivals don’t generally book us because we don’t have an agent. I’m happy to remain ‘amateur’… booking and promoting our own gigs…

Ian: So, as things sit at the time of writing Eureka Machines are the 3rd-biggest-selling rock band in the UK [behind Guns ‘n’ Roses and Fall Out Boy] – you must be feeling pretty pleased with yourselves?

I: In the run-up to the campaign finishing there was semi-optimistic talk about ‘striking a blow into the world of corporate con-artists perpetuating their lowest-common-denominator tripe’ – do you feel vindicated in that?

C: It’s of huge importance to me that we never demean the intelligence of the listener. You can say something profoud and dress it up in a three-chord stompalong. Likewise, you can write about not being able to find your keys and throw in a load of esoteric multi-layered weird harmonies.

Also, it’s important to me that EVERYONE should be able to do this. Not just rich people, or the ‘music industry’. I think it’s part of our job to show people that there IS an alternative.

I: The Pledge campaign for ‘Brain Waves’ came close in terms of target % achieved to the previous ‘Remain In Hope’ one [391% and 526% respectively], and seemed slightly more ‘streamlined’ with the special edition stuff selling out fast – was it a conscious effort to make the whole thing a little leaner?

C: First things first, ignore the percentages. That’s just an arbitrary figure that the Pledge people put on to give an idea of how that particular campaign is going. They don’t reflect the target amount, which was different each time (this time it was more, as the DVD was expensive to put together).

Second, we learned a lot doing the first Pledge campaign, and there were a few ways in which I thought it could be made better for the punter, an easier for ourselves, specifically when it comes to posting all this stuff out, which is a mountainous ball ache.

I: The ‘postcard set with giveaways’ seemed something of a masterstroke with how quickly it sold – but was it hard to part with the Iceman guitar that’s become as much a part of your onstage image as the suit ‘n’ tie?

C: It was hard to get rid of that guitar, but it went to a good home, and it raised some money for our band’s album and for charity. I was using it less and less, and I try not to get too sentimental about possessions as much as I used to. Someone should be playing it, and that someone is. The person who got it wrote us a song on it, which is worth far more than what it’s worth, if that makes sense.

Besides, I’ve got another one… 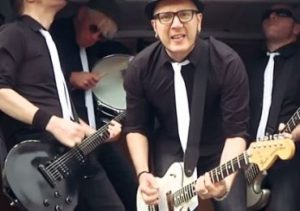 I: You’re coming to the end of a fairly short-but-comprehensive UK tour in support of ‘Brain Waves’ – are there plans for festivals or a second tour over the summer?

C: Festivals don’t generally book us because we don’t have an agent, and bands in that world don’t generally go direct to the source, it’s seen as a bit amateurish. I’m happy to remain ‘amateur’… booking and promoting our own gigs, not have to give away a cut to someone who doesn’t care about the band as much as we do, and reinvest the money we make back into the band. This level of amateurism allows us to continue doing the things that we do.

We’re planning a handful of dates in November, but at the moment I’m seeing the other, more tedious, side of being a DIY band… I’m pretty low down on the list of people venues seem to want to get back in touch with. In spite of the fact we’ve sold out half of the gigs on the last two tours, and our crowd likes a drink. Times are hard for venues, you’d think someone offering them a hire-out plus a drinking crowd six months in advance would bite your hand off. Sadly, my hand remains free of tooth-marks. Meanwhile, venues seem happy to lose money hand over fist to please agents who have bigger bands and a dick to swing.

I: Are there any ‘road rules’ that Eureka Machines abide by?

C: Dave had told my girlfriend the other day that if I am being stressed, he says he’ll drive, so that I can have a drink and chill out.

I predict some very stressful times for me in the future.

I: It came out in March that the Roadhouse in Manchester will be closing its doors soon [EM played what will be one of the last ever gigs there this week] – as someone ‘on the ground’, is it becoming more difficult to find decent gigs in decent venues in the UK?

C: Yeah it can be, as well as the aforementioned difficulty in getting someone to answer an e-mail or a phone call. Ultimately many people in the music industry are flakes and lazy. The good venues will always do well, because they provide a good service to bands, crew and most importantly punters.

I: The new video pretty much sums up the Eureka Machines’ DIY ethic, albeit by accident rather than design – what’s the story with that?

C: On the Saturday, we had a three-hour window to shoot a video, which then would be edited the following day, for release on the Monday (to go with the album). Unfortunately, there was a massive storm and the studio we were supposed to be filming at was flooded and we had to think of something fast. We were in the van already and the only thing we could think was to do it in the van. Consequently saving a load of money as well as making probably my favourite video we’ve done, in the shortest amount of time.

We live on our wits and our imagination. And nobody can say we’re inefficient.

I: There was talk last year about collaborating with AshTV on a band ‘Come Dine With Me’ kinda thing – did this surface as the cookery videos over the Pledge campaign?

C: We just don’t have as much time these days, with day jobs and kids and the price of milk, so it never happened, but one day it might be fun to do. I love all that kind of stuff, and the people that come see us seem to as well.

I: To finish on – on a scale of one to ten, how pessimistic are you following the general election?

C: I’m sick of thinking about it, to be honest. It seems like we’re destined for the George Orwell quote – ‘if you want a vision of the future, imagine a boot stamping on a human face – forever’. Those decisions have been taken out of my hands by fellow human beings, who exercised their democratic right to do that. Whether I disagree with it or not, and I utterly and wholeheartedly do… it’s done, it’s gone, it’s happened.

I get consumed by anger when I think about some of it, especially the NHS stuff, and Trident, and food banks, and the enormous hikes in tuition fees, and Michael Gove, and zero hours contracts and so on… and call me weak, but that anger just doesn’t work out for me very well any more. So I am just getting on with my own thing and trying to forget about it.

Plus, it seems we’re eternally fucked – check this out (apologies for Torygraph link)
http://www.telegraph.co.uk/news/11593496/New-Commons-boundaries-top-Conservative-government-agenda.html

Might buy a bowler hat and a wax jacket. If you can’t beat ’em….? (Obviously this is not true)

I: And on the flip-side – what one thing is guaranteed to put a smile on your face?