Heavy and pulsating with evil… Open up the Casket..
Wisconsin groove death metal quartet Casket Robbery are set to release their debut full length album. Paul Castles spoke with guitarist Cory Scheider about Evolution of Evil, serial killers and girls with no tops.
Paul: Hi guys, thanks for speaking to Midlands Rocks. Your debut album Evolution of Evil is out on March 4, via Mortal Music – How are you feeling about things? Cory: Thank you for chatting with us, we appreciate it!  We are all super excited about this release.  It has really been a long time coming.  A lot of waiting for the right moment to release and plan and get everything prepared.  Although, you can never be fully prepared.  This is our first full length and though we all have a lot of experience we have been learning a lot releasing this thing. Are these all songs that have been written recently or do some go back further?Since it’s the first album some of the material has been around for a while.  We actually decided to use some older songs because they fit well with the “vibe” of this album.  And we have some real power house tracks.  Like ‘Blood Bathory’.  We actually release it as a single a while back.  We didn’t like the studio we worked with back then and they gave us a pretty bland mix back.  We wanted to do the song justice and have it redone on this album.  It’s definitely a favorite.  The album is mostly new tracks though.  You can definitely see a progression from the early EPs to what we are doing now.  Who takes the lead with the writing process?I mostly take the lead with the songs,  especially on this album since most of the guys are newcomers to the band now.  We had a lot of the songs written before we had this line up.  Sometimes our singer Dustin Foesch will come up with some concepts or visual ideas with his lyrics and give them to me, and sometimes I will start with an idea on guitar.  I take those and come up with the riffs and song structures.  Dustin will add lyrics to it and we present a general song to the rest of the band.  They add their own ideas and style to the songs and that is really what brings the songs alive.  Everyone’s input is critical.Does the album carry any particular theme or concept? What’s the motivation behind the songs?The album’s theme is actually the title ‘Evolution of Evil’.  There are songs about serial killers and also some concept songs about evil characters that Dustin came up with.  ‘Annibelle’s Hell’ is about a little girl that kills her foster parents because the “boogey man” tells her too.  The general idea of the album is that there is evil present everywhere.  We are all evil and can tap into evil thoughts or actions at any time. 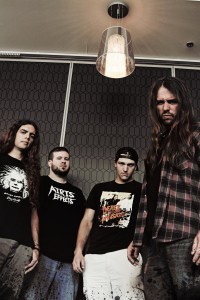 Why has it taken five years to get something out since your last EP?Wow!  Someone has been paying attention haha.  I think the last EP Shrouded in Darkness came out in 2012.  (It doesn’t exist online or on CD anymore)  The main reason is that line up changes kind of delayed everything.  We were facing problems of unreliable people, flakey people.  We run a very tight ship as a band and kept getting in these kinds of people and it brought with it a bad energy.  We needed to take time to find pro guys to fill the spots.  We took time to write the album, regroup, and find the right people to do this with. We spent a lot of time and energy making this album and we knew we could only release it when we had the right people in the band.  The break was a breath of fresh air for us personally but it also brought a new energy for the album.   Greg and Patrick both brought in this awesome, positive, and enthusiastic energy!How did things fall into place in the studio? Any difficulties?The studio was great.  We took our time and made things right.  I produced and tracked a lot of the album.  It was my first time tracking a full length so I wanted to make sure everything was done right.  Greg tracked his own drums and then I had Cody Ratley at The Grainery Studio track and engineer my rhythm guitars.  From there I tracked bass, vocals, and lead guitars.  We spent a lot of time layering vocals, creating sound effects, and layers for everything.  It was a long process looking back but it really all came together naturally for everyone and we were able to spend time on it and do what we needed to do. You’ve produced a great video for ‘Annibelle’s Hell’, the album’s first track. Looks like you’re all in a big derelict warehouse unit – where was that?We shot that in Dubuque, Iowa.  Greg set up the shoot and got us a great video producer named Tim Connery.  We shot it in this empty warehouse.  There were huge amounts of water leaking through the roof and the floors were caving in.  I think we were on the third floor of this place.  The whole time during shooting I was wondering if the floors were going to collapse!Any particular bands you would cite as influences?No, I cant really pinpoint any bands.  I write the music visually.  I think of horror movies when I write the songs.  So, a lot of the time I try to think of what the sound track would be for a killer as he is hacking up a victim.  What kind of sick noises and sounds would he hear.  Things like that are mostly the influence because musically I draw from every where. How long have you all known each other?That is a long story of how we all came together!  Short answer is that Dustin and I were childhood friends, Patrick and I met on a guitar web forum and always stayed in touch, and Greg we met through playing shows with his other band.
I know some of you have commitments to other bands – So what are the long-term plans for Casket Robbery?For all of us the plan is to use this album release as a launching point.  We are going to keep hitting it hard.  We have a great album to build off of and the right band to make it happen.  We are going to do a lot of shows and touring.  There are already song ideas and riffs for the next album/EP.  We’ll keep it going strong. How was your gigging schedule last year? – any standout shows?Last year we were just album prepping.  That took up most of the time.  Finishing up recording, mixing, and label shopping.  Things like that.  The tedious stuff that drives you crazy because you aren’t playing shows!  We did end the year with a couple of “tune-up” shows for the new line up.  They went great and just proved that we still have the live intensity that we are known for.  Are there plans for a US tour to promote the new album?Yes, we are going to hit the east coast.  We are trying to finalize a few shows before we announce a small run over there.  And, if we can continue getting support we will be touring more often.  We hope that everyone is really into this album and that we can continue to support it on the road. 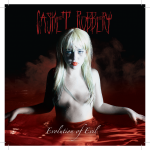 Having a topless girl on the sleeve may seem controversial. What made you choose that approach?Funny, because no one has said anything to us about it yet but I was waiting for it.  Check out the lyrics for ‘Blood Bathory’ on the album.  It is about Countess Bathory who would drain the blood of virgins and bath in it.  That was the idea for the cover.  We thought that image was pretty shocking and the story even more so.  We wanted to stay away from a typical death metal album cover too.  We wanted it to look more basic and simple.  Have you had any negative feedback over the sleeve?No, nothing so far.Is she a model or a friend?She is a model that Dustin knows.  Elizabeth Jean was the model and Audrey Martinovich did the photo.Thanks for talking with Midlands Rocks. Finally guys, tell our readers what to expect if they rush out and buy Evolution of Evil…The reviews of the album will tell you everything you need to know.  The best description is that it is an unrelenting rollercoaster ride.  It just keeps slamming and there is never a dull moment on the album.  It goes from eerie, to dirty, to catchy, to fun without skipping a beat.  Check it out,  I think that it has something different to offer the death metal genre.  There is something in there for everyone, even non-death metal fans.