Their third full length release, DEAFKIDS’ Metaprogramação is their first studio album to be released with Neurot Recordings on 15th March (reviewed here). Imprinting a future-primitive psychic scenario into their music by weaving a fabric of electronic pulses, barrages of delay and noise, wailing guitars, and frenzied rhythms that ricochet aggressively across the speakers, Metaprogramação is like nothing you ever heard. As the band states:

“Metaprogramação offers a vertiginous, sensory insight on these inner conflicts and aspects of the animal being.”

Deceived by perceiving our so-called individuality as a form of freedom, we are programmed to live and continue living as a fragmented and binary model of nature. Experimental numbers in a worldwide political power-game where human lives and its complexities, connections, necessities and environments are lowered in terms manipulated by algorithms, mind control and brutal force upon our conditions, our rights and our true will. Shaping, overwhelming and fragmenting our tunnels of perception to the point where the excess of information becomes diffused and the whole contained within each being is more and more dispersed, confused and disconnected. Reflecting an insane image of ones identification with an artificial reality – where in some bizarre way, all these schizophrenic, corrupted and truculent theatres of domination and submission that appears all over human relations seems to make some sense – and of non-identification with what would be our inner reality. The telepathic level behind the veils where boundaries and divisions between us and the plane of consciousness, between you and the other don’t really exist. A level of reality where we might have the power to start learning how to reprogram ourselves by our own tools, being able to visit our internal hall of mirrors beyond space and time and deal with the negative roots of our condensed emotions and traumas through a new perspective of relation and control with our thoughts, paths and everything we’re connected with. We must unite as one and resist against the violent symbols of oppression, including what’s imprinted on our own self, that which must be sacrificed daily.” 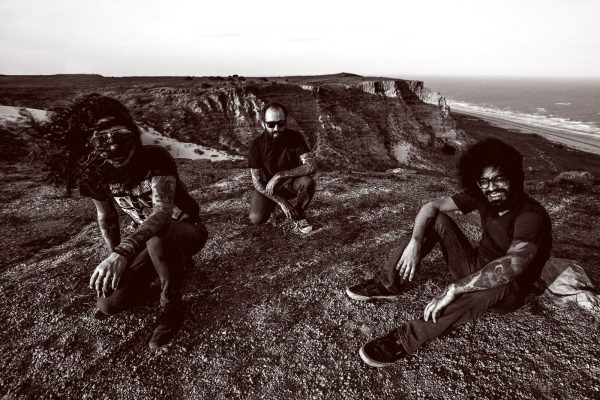 Here, MR’s Jason Guest talks to the band about the album and it’s development, how the band came to work with Neurot, the band’s history and evolution, and what to expect from them in the near future.

Mariano – We’ve worked on the album for a month and a half, between writing, recording and post-producing. Since we didn’t have much time, the compositions retained a certain fresh spirit, as we developed the ideas just the right amount for them to become songs.

How did you approach composition? Did you have an idea of how you wanted the album to sound, or did each of the tracks and the whole thing take shape as it was being developed?

Mariano – We explored loops, rhythms and riffs and we developed things from there… we knew we wanted the album to sound like a follow up of what we were experimenting with, with a strong percussive vibe and many processed effects. We had Espiral da Loucura and Templo do Caos written before the production of the album, and when we began making music for it, we wanted it to flow it naturally, to create a vibe where the progression would be harsh but smooth.

Mariano – I think it’s a natural progression for us, both thematically and sonically. We took the things that we think that characterize our newfound music and wanted to take them to whole new extremes, and I think we achieved this somehow.

Mariano – The artwork deals with the same things the music explores – the hallways of our mind, the backdoor of our own mental structures. It relates to the altars and pulpits we have risen inside our heads, and how we identify with the masks juxtaposed to our faces. As the music, the artwork is not literal or verbal about these subjects, but it explores them in a more subtle, less rational way.

The album is being released through Neurot records, Steve Von Till in particular holding your band in very high regard. How did you come to be involved with the label and Von Till?

Mariano – He had heard Configuração do Lamento on a ‘best albums of 2016’ list by Cvlt Nation that they were featured on, as well as us. He got in touch and then the album got released in 10” and CD. Then they came to Brazil and we supported them on their concert here, and that’s when we first met personally. We got along very well, and they asked us to support them for five dates in Europe, which all rolled pretty neatly. We’ll support them for 10 dates in the U.S and in Canada, and we couldn’t be more excited about it.

Deadfkids originated as a solo project by Douglas in 2010. Was there a musical vision or concept that you had in mind for the band? How did you seek to capture that in music?

Douglas – Yes. The musical vision was and still is that every recording must be different and explore other paths than the last one, defying myself and ourselves creatively, also exploring different concepts and themes regarding the negativities of the human mind and the political/social issues of our everyday realities. The visual part and the aesthetics also has always been an important part of the whole vision.

The band’s sound has changed over the years with your early material leaning more towards punk and d-beat and more of the experimental emerging more over the years. What has inspired this evolution?

Mariano – Our path as people and as musicians affected it as a whole. Our personal trajectories, our influences, learning new instruments and connecting to other forms of music-making, all of which affected the way we wanted to sound and even to make what we do.

Mariano – I would say there are elements which are clearly recognizable as links between both, but we have found our sound through experimentation, and it keeps pushing for more.

Musical or otherwise, who or what influence or have influenced the band? And how has it impacted on the band’s sound?

Mariano – The writings of Robert Anton Wilson and Timothy Leary, Gurdjieff and others are a big inspiration to what we do, as the rhythmical and psychedelic music of across the world is.

Early days I know as the album is being released in March, but what does the future hold for Deafkids? Is there more music in the works?

Mariano – We intend to come back from Europe and work on some more material – there’s also a compilation of remixes soon to be released, and we’re really excited about it!

What shows do you planned? And will we be seeing you in the UK?

Mariano – We have some tours schedule and some more on the works, so we intend on spending the next years as busy as we can. We’ll play some dates in the U.K in this European tour! We’ll play London, Manchester, Brighton, Cardiff, Bristol and Newcastle. Check out the band’s pages for getting the dates! (links and dates can be found below)

What would be the ideal setting for a Deafkids’ show?

Mariano – I think any place where people just let go and dance, reacting to what they’re experiencing. We have played in so many different contexts, and some concerts seem like they’ll be horrible and end up being extremely awesome, and vice-versa. It’s all a matter of vibe, of the energies exchanged between everybody.

Mariano – Thanks for the support and the opportunity! Hope we’ll see yourselves in a matter of days! Do not allow yourself to be programmed!