You know that gap in your record collection? The one where there a no sloths? Well, you can now fill it with the debut album from Sloth., poopily entitled Slow As Sh*t. Here, mainman Blake Caverly talks to MR’s Gary Cordwell all about Sloth., sloths, and sh*t… sort of.

Firstly Blake, thanks for talking to The Midlands Rocks, the album is great. So what was the genesis of Sloth.? How did it all start?

Thanks Gary. The name came first. I decided I wanted to make some stoner metal and I was thinking about names for it while I was bored at work. Sloth popped in to my head. It perfectly described the slow, hazy music I had in mind, so I just rolled with it. Then I made a demo version of ‘Waking Up’ and it all grew from there. The first demo was all midi guitars and had me doing some really bad humming over the end. There are still remnants of the humming in there if you listen closely, like a ghost from the original demo.

There have been concept albums about many things… why sloths?

To tell the truth, I just thought the idea of a giant, Godzilla-sized sloth trashing cities was rad. ‘Awaken That Which Lies Amongst The Trees’ is the only song with lyrics, it’s about a wandering traveller accidentally awakening an ancient, giant sloth. The song ends as the sloth wakes up. So in lyrical terms, the sloth hasn’t even trashed a city yet. I think the second album will continue on from this.

There’s quite a variety of musical styles on this album. Who or what are your influences?

The triangle of influence on the album is Boris, Bongripper and Pallbearer. There’s some other stuff in there too, a bit of Winterfylleth, Nile and Sleep. I like a lot of different metal, but it isn’t all represented in Sloth. I will probably do a separate black metal project next to explore the more extreme side. 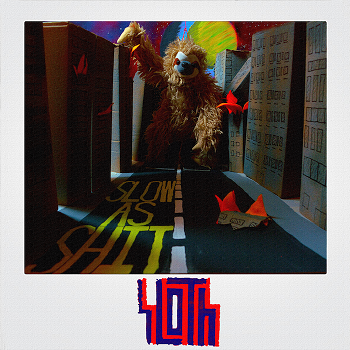 I love the album artwork, were you responsible for that too?

Yes! Thank you. Originally I was trying to find an artist to do me a proper piece of art, but that didn’t really work out. I thought doing it in the style of a home-made old school Godzilla would be kind of cool. In my mind it looked a lot better than the finished product though. I was gonna have a collage of people running away from it, magazine cut-out style, but couldn’t be bothered in the end.

The samples and snatches of electronica are a refreshing change in this genre; how important are they to you and to the Sloth sound?

Well I think it adds an atmosphere to it that you don’t really hear much. All of the fuzz and bloop noises are done with this tiny Korg Monotron Delay box I’ve got. It’s analogue, so it sounds really old-school. The more conventional synth stuff was just done using different apps on the iPad.

Is it true that the album was completely produced on your iPad? It sounds incredibly full and clear!

Yep, using Garageband as well! It’s been a struggle though, the software is really limited. For example, you can’t adjust the volume of a track and make it fade, so I’m stuck with a lot of abrupt stops when I link tracks. I managed to find ways around it, but I think I’ll upgrade for the next one. Either try a better app or just record on a Mac.

The album apparently took a year to create, was this due to a strong perfectionist streak or just a holistic approach to the whole sloth theme?

You could say I was method-recording haha. Really though, I could only record during my spare time. There were a few times when I got stuck and it took months to figure out what to do next in a song. ‘Call Of The Sloth’ and ‘Nothing But Leaves’ spring to mind. In both of these, the beginning was recorded about two months before the end. The cover art took a while too; I essentially sat on the complete album for about a month while I did that.

Is Sloth. a going concern? Will there be more albums and will they be sloth-centric?

There will definitely be more albums. There’ll probably be a sloth on the next album cover, but I don’t know what I’ll do with it content wise.

Will Sloth. play live? And logistically how will that work? Will you be putting a band together?

I’ve had an offer, and I’ve tentatively accepted, to play next year at a festival. However I haven’t thought it out yet. I’d need a band, if I can’t find the right people I’ll call it off. I won’t be performing on my own on stage.

Thanks again for taking time out to talk to us; do you have a message for our readers?

Send me requests for custom T-shirts. I do them to order, so you can have whatever you want on them for the same price. Hail the mighty Sloth. Peace out. Drop the mic. Thanks for the interview!