Art should be used as a powerful transformative force…

With their new album, Code, released recently, guitarist/vocalist Antares of Poland’s Iubaris spoke to MR’s Jason Guest about the album and all that went onto its creation…

Thanks again for taking time out for this interview and congratulations on Code. To begin, can you tell us how long you’ve been working on the material for the album? How long were you working on the new album? Is it all new material or has some of it been in the pipeline for a while?

Thanks! Some of those songs are very old; composing them was a long and difficult process. Most of them went through phases, from being a complete but basic song, something I’ve put together from our riffs and drum beats, to something entirely different that always unexpectedly popped in my head. It was almost like trying to solve a big puzzle. Whenever it happened I never had a chance to record what was in my mind, so I memorised it each time as best as I could.

The oldest song has to be ‘Eternity From Ashes’, which came up from a spontaneous jam we had in late 2008, shortly after Vulpus joined our band. ‘Lost’ is second, with chords and arpeggios Erthun sent me in 2009. ‘Odium’ has to be the record breaker for the number of versions composed, the one you hear on the album is the fifth or sixth one. I thought all previous versions sucked, because they all leaned to a more extreme, one-dimensional approach. Previously ‘Dysforia’ and ‘Odium’ were one song, with the latter exploding just after the bass solo, much in the style like Gorgoroth’s ‘White Seed’. We were really excited about that approach at first, but it quickly became stagnant and bland for me. I spent a lot of time on these songs, trying to figure each one out. They saw a lot of places with me. 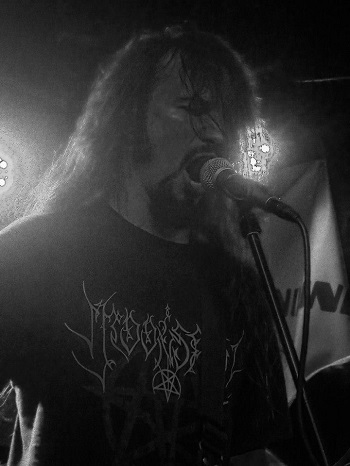 When writing for Code, did you have an idea of how you wanted it to sound or did each of the tracks and the whole thing take shape as it was being developed?

A bit of both. Sound-wise I had a general idea from the start. I wanted to explore unconventional guitar playing, solos and guitar parts that didn’t really seem to fit in standard metal, a strong and audible bass, and a Bathory like snare, loads of reverb and delay. I don’t like records that sound like they were just recorded in a sterile studio. That kind of sound doesn’t bring anything visual with it. I like to hear space, doesn’t matter if it’s tiny and claustrophobic or huge and monumental. Right now I already heard two people say that this album sounds like it’s been produced in the early nineties. That was exactly my intention. In my opinion the nineties were the best era for rock and metal.

Were there any specific goals that you wanted to achieve with Code?

I’ve tried to create sort of homage to all my influences and heroes. These days there is already a ton of great music out there. I felt that if we’re doing something, it better be pretty damn good. Or else why do it? I’ve tried to push everything to the limit.

Is there a concept to the album? What are the lyrical themes on Code?

Code continues the story after Ars Sathanae II, as now the action takes place almost entirely in a different reality, or inside the protagonist’s head. Or inside your head. It’s no longer a physical place in any way. The lyrics represent different aspects of interaction with art.

Magnum Coeptum was entirely about experimenting with different states of consciousness and alternate death. This album goes into the consequences of such experiments. It’s about communicating with information itself. If you listen to a song, it has an effect in you. But you also affect the song. This is a great simplification about what the album is really about, but I think it’s the most straightforward explanation. I can’t go into detail about what any of the songs are about in particular; the bigger picture is the key here.

Can you tell us about the album title, Code, and how it relates to the album’s lyrics and music?

There are a lot of things behind that title. It relates to how the album was written. There also is another meaning. Music is a living language to me. I subscribe to Alan Moore’s view on art, in that it should be used as a powerful transformative force, rather than for simple and banal entertainment.

Sonically, Code is a very diverse album. The album features elements of death and black metal but leans more towards the atmospheric and the experimental and Vulpus’s bass has a significant presence on the album and his lines play an important role in the music. What inspired this approach?

We all listen to lots of different kinds of music, and it definitely had an effect on the album. As for the bass, it was Vulpus himself who inspired this approach in me. He’s more of a rock/jazz/blues kind of player than he is metal; open-minded, versatile. I figured if there are guitar leads, then why can’t we have bass leads? And none of that ‘e-e-e-e’ shit. We first utilised this idea in ‘Rebirth’ on Ars Sathanae I, and it sounded good, so we sort of expanded that idea.

The same goes for riffs. You can take any extreme metal from any genre. It doesn’t matter if it’s black metal or death metal, the bass guitar is always buried in the mix. We’ve tried to make the bass as heavy, natural and full as we could, without it overpowering the rest of the instruments. The most important thing was to make a balance between a strong, metal kick drum and a great bass guitar. You can’t have a real rhythm section in the mix without it. I think it turned out good.

The liner notes on Magnum Coeptum Satanicum identify you as the main writer. How much input did the other members have in the writing of Code?

We all worked more together on this one. Hipnagog was really good at giving me ideas, or telling me when I took things too far. He’s good at analysing our stuff. As you noticed, we ended up using a lot of Vulpus’ riffs. ‘Plod Through’ was made from a jam between him and Hipnagog.

Mjolnir had a tremendous impact on the way I’ve written the more complex guitar parts. We are both at the same level when it comes to our playing skills, so I could easily double my own arrangement ideas, knowing he could play anything I would come up with. We’ve discussed each detail with the band, even in cases when I was the only author of the song.

How has Iubaris developed since Magnum Coeptum Satanicum? And how is it reflected in the new material?

We have our own studio now, which Mjolnir built. For Code, we only recorded the drums in Velur studios, but mixed them ourselves. Mjolnir is a completely brilliant engineer. I know how to mix DAWs, but I don’t know how to record using different microphones. He’s got it all figured out.

Has having a settled line-up had an impact on Iubaris?

The best thing about it is that I now know how the guys play. I know how to write music to make things flow together. For example, when I finished ‘Now’, we nailed it the first time we ever played it on the rehearsal. When one of us has an idea, the rest is more patient to examine it.

What does the future hold for Iubaris? More music? Gigs?