“…xenophobia, prejudice, fear and ignorance can corrupt even the best of us.”

Thank you very much for taking time out for this interview.

Andy: No problem at all. Thank you for having us!

Beyond Grace has just completed a run of shows with The Monolith Deathcult. How did the shows go? What were audience responses like? 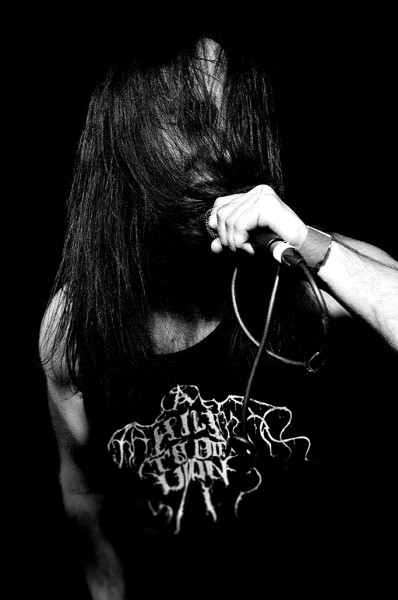 Andy: The shows were great. Stressful (since we actually booked them all and organised each one ourselves) but totally worth it. The Monolith Deathcult are a great bunch of guys, and extremely funny. And although we’ve known Talanas for a while now it was great to have a chance to become better friends with them over the course of the tour.

In terms of audience responses though, we couldn’t have asked for more. This whole tour, from our perspective, was about re-establishing the band after the name change and pushing our new songs and our new sound, and every night we were making new fans, getting the EP into people’s hands, and just making connections that we’ll be able to build on over the rest of the year. It’s just fantastic to get that sort of response from people, particularly when I don’t think we fit too clearly in one particular “scene”.

Beyond Grace have just released their first EP, Monstrous. Can you tell us a little bit about it?

Andy: Long story short the EP was something we felt we needed to do, to give ourselves a new foundation and move on from some of the baggage and bad blood that had been holding us back for ages. It’s three tracks of technically twisted death metal, with hints of dark melody and some pretty massive hooks, and we couldn’t be prouder of it. We recorded, mixed, and mastered it to some pretty tight deadlines, and it actually turned out much heavier than we were expecting it to… I think in all honesty we’d been underestimating ourselves in that regard for a while now, we’ve been drifting towards a heavier, deathier style for some time, so it’s nice to have something to point to and be able to say “That’s us. That’s our sound.”

Andy: Lyrically it’s conceptually linked by the ‘monstrous’ nature of things. ‘The Chronophage’ is about time as a monster, endlessly pursuing, endlessly devouring, whereas “Inhumanity” (which was re-titled and rewritten one week before recording so as to fit with the rest of the concept) is about the justification of monstrous acts in the name of “the greater good”. And ‘Invasive Exotics’ is about xenophobia and prejudice, and how fear and ignorance can corrupt even the best of us.

The lyrical theme for the album is going to be somewhat different, but all the ideas come from things I encounter, particularly things I read – both fiction and non-fiction. I’m always noting down lyrical ideas and song titles that I think are interesting, wherever I find them.

Who designed the artwork? And how much direction did you give him/her in its design?

Andy: The artwork done by the very talented Dan White of Dan White Graphic Design. We sent him some early mixes of the songs, along with the lyrics, and just told him we wanted something monstrous. Which he definitely provided! He’s also doing some monster-ised promo pics for us to showcase the current line-up, one of which is partially featured on the actual EP (that’s my desiccated eye-socket on the CD). 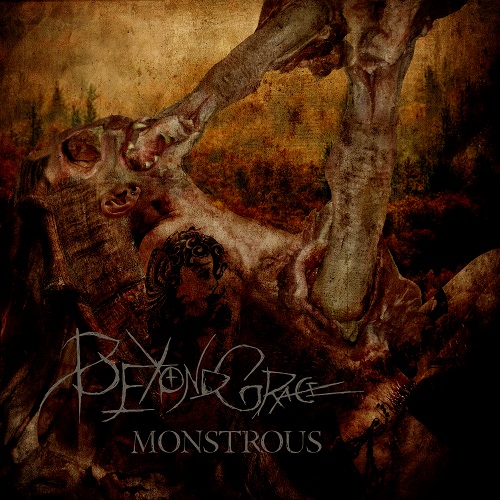 Can you tell us a bit about the band’s history? What was it that drew you together to form Beyond Grace?

Andy: We’ve been together for a while, in various forms, but due to several major difficulties and setbacks we decided it was time for a fresh start, hence the name change and new direction. We’re all drawn together by a desire to write and create music that’s not just crushingly heavy, but that’s also interesting to listen to and challenging to perform.

We like to think there’s a lot of layers to our music, touches of dark melody, some shifting time signatures and unexpected twists… I coined the term “Omni-Dimensional Death Metal” for our sound because a.) I didn’t want to use the word “progressive”, which is massively over-used these days (and doesn’t seem quite right anyway), and b.) because I wanted something vaguely tongue-in-cheek that would also look cool printed on a t-shirt!

Andy: Off the top of my head I’d namecheck Becoming The Archetype, The Black Dahlia Murder, Darkane, Living Sacrifice, Blood Red Throne… but I think, after working together for a while before releasing our first EP, that we’ve manage to pull together a sound more distinctly us, and one we can build from, rather than one too closely informed by our influences.

How do the band approach writing? Do you work separately and bring complete songs to the band or do you collaborate on ideas?

Andy: In terms of our writing, Tim (guitars) tends to do the majority of it, at least in terms of getting songs started, whereas I tend to be more about restructuring and streamlining things once they’re underway – although we all contribute riff and melody ideas when they come to us. Usually we’ll bring the foundations of a song to the practice room, then work in collaboration to finalise it and whip it into shape. The addition of Andrew’s bass work and Ed’s drumming tends to have a big impact on things… their influence and playing often changes the feel of different parts in unexpected ways. Plus Ali (guitars) is now a lot more integrated into the writing, and he brings some totally different skills and inspirations to the table (since he’s the best musician out of the lot of us).

What are your plans for future live performances? Any shows coming up? 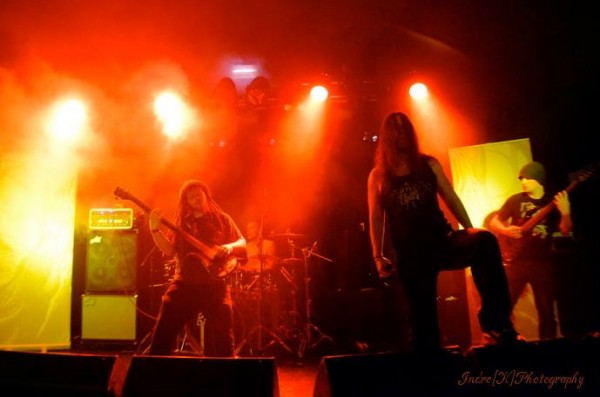 Andy: At the moment we’ve got a couple of things in the pipeline, hopefully hooking up with the guys in Rannoch for a few shows, and I’ve been talking with Chapters about doing a short run too. Also Ancient Ascendant are a phenomenal band, and I know a couple of them are fans of us, so fingers crossed we can get something going together (their new album is absolutely fantastic btw!). Maybe… maybe… a short jaunt across to Europe too. Oh, and Bloodstock. Fingers crossed for that one!

What does the future hold for Beyond Grace? Is there more music in the pipeline? Another EP or an album, perhaps?

Andy: We’re actually already working on an album. We’ve got 5/6 songs 70-90% finished, and already have the artwork sorted (which is probably a little backwards, but that’s just how it’s happened). We’re hoping to go in and get to recording it before the end of the year!

What’s your view on the Midlands metal scene?

Andy: It’s funny because we’ve never really fit in with our local scene all that well, so haven’t tended to play home town shows all that often, but in the last year or so whenever we’ve been on tour and stopped off in Notts for a date the shows have gone really well. Other members of the music scene have always been supportive of us, but it feels like only recently we’ve started to break through to the local crowds and fans, whereas previously we’ve pulled more people in places like London and Manchester.

Overall though the Midlands metal scene is pretty fertile at the moment… actually I think the whole UK scene has a plethora of great bands simmering away in the underground. I’m not talking about the generic djent or –core bands who tend to get all the quick headlines before fading away, but more the bands who’ve been doing the slow build, the ones who’ve got their own distinct sound and flavour. They’re the ones I really gravitate to and there’s a lot of them out there doing their own thing and creating some seriously intelligent, really interesting metal – off the top of my head I’d namecheck Rannoch, Chapters, Talanas, Spires, De Profundis, Ethereal, Agonyst, Narcotic Death, Ageless Oblivion, Taken By The Tide, Coltsblood…

Andy: Just to say thank you once again for talking to us, and giving us a chance. I hope people check out the Monstrous EP and that it inspires them to come out and see a show, buy a copy of the CD, and spread the word about us.

And you can find out more about Beyond Grace at these links: