On 28 May, Austria’s Amestigon released their second album, Their. Arriving five years after Sun of All Suns, with four tracks clocking in at just under an hour it sees the band urging into ever-darker mystical and musical depths. Here, the band talk to MR’s Jason Guest on a few topics including the band and its development, the album, music and improvisation, religion and oppression, and the beast as the “architect of ourselves in a metaphysical way”…

Thank you very much for taking time out for this interview and congratulations on Thier, an incredible piece of work. It’s been five years since Sun Of All Suns. How have the band progressed since then?

SOAS was our first full length album and it seems we had a pretty good learning curve when it comes to writing a whole album. The concept is much tighter on Thier compared to SOAS and Thier seems to be more monolithic. There is also a progress in sound thanks to our grown experience in recording and mixing abilities, and of course due to the dedication of Thomas, our mastering engineer at Pure Sound Recordings, Vienna. On our way to Thier we shook off all the elements from the physical world we created on SOAS and floated the metaphysical world of Thier.

I gather that writing for Their began immediately after Sun Of All Suns was recorded. With writing commencing so soon, how did you work to avoid repeating yourselves?

Actually we just discussed this issue yesterday. First track on Thier which is called ‘Demiurg’ is a good example. We started with the track after SOAS was recorded, even before it was released, so it’s the closest track to SOAS. We can hear riffing and song structures on ‘Demiurg’ which is also to be found on SOAS, but while the process of creating Thier went on, we changed again some details on ‘Demiurg’ to make it better fit on Thier. And again we have to stress sound again, which is quite different on Thier compared to SOAS.

Ideas of sound are always there and this is a lead we follow quite strict. We do not have any coincidences when it comes to sound. This is a very much and often discussed topic in Amestigon. The tracks on the other hand shape in the process of creating. Here we sometimes feel like soldiers of fortune, when tracks are suddenly there while rehearsing and jamming.

How long were you working on the material? Was it right up until recording began?

Songs really get mangled by us. We play and adapt them very often until we have a structure which is ready for recording. This structure fixes most of the guitar parts and the drums. Bass is more or less completely improvised on every recording and some additional guitars as well as some solos are also a little bit improvised. Usually when rehearsing it’s only us three and we play with drums and two guitars. The only possibility for us to hear additional tracks together with drums and guitars is while we record them. So ideas are there but in the process of recording we are still quite open for changes. 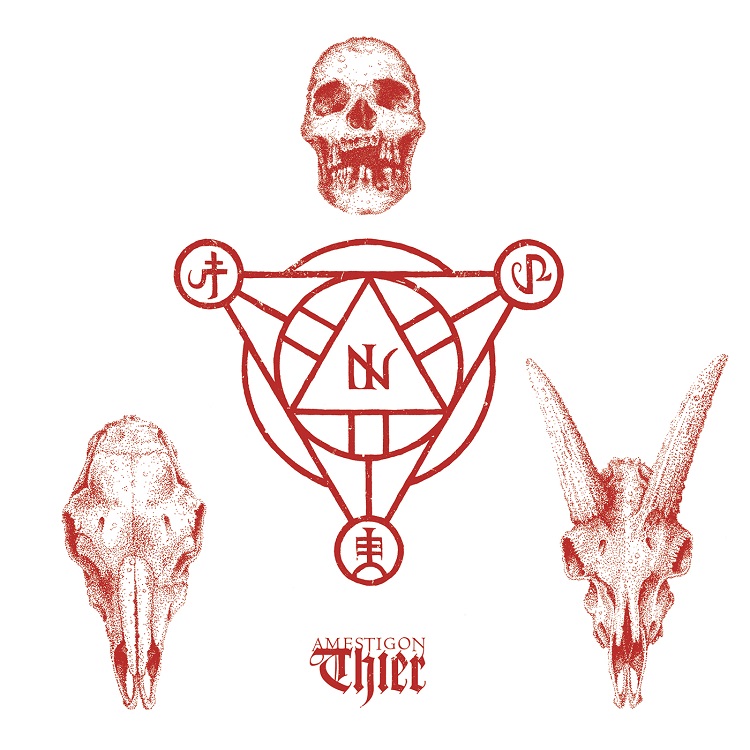 Can you tell us about the artwork, the symbolism, and how it relates to the music?

Artwork was done by Irrwisch Art Design a young and promising designer who started in 2013 and already has a very impressing portfolio. His artworks look very different sometimes because he wants to give every band its own style. When we worked with Alex we just had some ideas of symbols and meanings and we talked to him to explain what the music is about. We also sent some unfinished tracks to Alex to give him a feeling for the music and he created an artwork very much fitting to the album.

The cover shows magical symbols of planets corresponding to different deities, a human skull and skull of a lamb and a goat. The skulls are representing the decision we have to make, to either easily follow the herd or to follow the rocky path of knowledge. Therefore we also have several symbols of snakes (.:358:.) in the artwork.

With such long and intricately-structured tracks on the album, is there room for improvisation in Amestigon?

I guess the question is answered above. In addition we should mention that we always start rehearsing with jamming for at least 30 minutes. Usually we play once per week and we do that for several years now. So we also know each other very well when it comes to jamming and this makes it possible to improvise a little bit during recording sessions too.

Thier – meaning animal or beast – is the “architect of ourselves in a metaphysical way [and so] the album is a cosmogony of our inner self.” Can you elaborate on this and perhaps explain how it has manifested itself in the music and the lyrics?

In general we follow the principle of freedom and the thelemitic words: “Do what thou wilt shall be the whole of the Law.” That does not mean to go out and do stupid things, but it means become self-aware. It follows one of the Delphic maxims γνῶθι σεαυτόν – know thyself. The beast is necessary to have a lead to stay strong even under unfavourable circumstances.

Amestigon has been in existence since 1995. How does the band of 2015 compare to the band of the early days?

First of all, we are roughly 20 years older now but we are also steadier. Wolf and Lanz joined in the late 90’s but this is the same for all of us. In the 90’s black metal was a big hype. It was raw and violent and it was everything. During the years we found out what it was not and what it should be. We formed a definition and crystallized a meaning. We all have different obligations now and time is a scarce good, but the band was in the 90’s and still is our anchor point which is immovable.

There was a time in the late 90’s and early 00’s when black metal stagnated and everything sounded the same. It was hard to find something new and exciting. Some bands tried to push the borders quite hard and failed miserably. It seemed a time when the devotion to the black arts faded into the background. In the meanwhile for several years now exciting releases are back again with the right emphasis on content.

Black metal is expressed as music, but not really a musical genre itself. Remember, Venom is black metal, Mercyful Fate is black metal and Amestigon is black metal, but all sound quite different. Anyhow it’s music therefore it’s an art. Ritual is tricky. Black metal can be ritualistic or at least have ritualistic elements, but there is also ritual music which is not black metal. Some songs are about a ritual or they are a ritual for themselves – listen to the bonus track which will come with the vinyl release of SOAS, here we have an example for a pure ritual.

No, because this is exactly what makes us stronger. We now have the possibility to spread the message through many more channels and reach much more people. Of course a band does not have to have commercial interests, but in most cases this is not black metal anyway. With W.T.C. we have a very capable label which works on all the channels of modern communication. In terms of artistic freedom we never got any directions from W.T.C. They are much more working very supportively and think about how to transform ideas from artists into CD’s, vinyl, merch etc.

What’s your opinion of the film adaptation of the Lords of Chaos book? Is it the death knell of black metal as art?

No death knell of course, therefore it’s not important enough. From all what we’ve heard and seen it seems it’s going to be the big shit…

Again a resolute No! Fuck “Hideous Gnosis” and this whole educational rationalise and understand movement. Please be aware that this is not black metal anymore. Black metal is not only an Apollonian art, it’s also and perhaps even more of a Dionysian art.

The occult and metal – black metal in particular – have become almost synonymous. Has it become cliché or is the occult still relevant?

Especially in black metal the occult is not only relevant, it is actually the leading topic. This is why it is called black metal.

Organised religion has for centuries, millennia even, relied on the oppression of the feminine and the exaltation of the masculine, whether symbolic, psychological, sexual, etc. Does the occult offer a viable alternative to this binary opposition?

Well, that depends on what you understand as organised religion because we have various examples of ancient religions where women were even in the lead. Of course we understand what you mean and the answer is a vague yes, because it depends what you make out of it. From our point of view the sexes have to be equal in religious practice. We see no reason why some have to be oppressed. Especially because in terms symbols and psychology we have a plethora of knowledge to give both sexes an equal status. One will not exist without the other.

The album has been released through WTC. Why choose to work with this label for the release of Thier?

It started when we searched for a possibility to rerelease SOAS on vinyl. W.T.C. offered this possibility and at the same time Thier was nearly finished. Soon after everything was clear for SOAS we asked W.T.C. if they are interested in Thier too and we sent some sound files. This led to the actual running plan to release Thier at first on CD and later this year together with SOAS on vinyl. At the moment W.T.C. is for sure one of the best black metal labels and we are lucky to be in good company with all the other bands. We experience the work with W.T.C. as very professional and band oriented.

Any plans to tour in support of Thier? Will we be seeing you in the UK anytime soon?

We’re quite sorry to say that we do not have any plans to play live. Actually the band is just us three and for playing live we would need two or three additional people who would have to rehearse with us and we would also have to put additional time and effort in such a project. Time we don’t have at the moment.

What would be the ideal setting for an Amestigon performance?

It would be a fantastic ritual.

What does the future hold for Amestigon? Is there more music in the pipeline?

We’re already working on new material. We have structures for three songs and we also have a vague structure of a concept. Songs will be shorter but we will stay dedicated to occult themes.