Performing music is sharing, it’s an act of magic.

Formed in 2004, France’s Aluk Todolo set the controls for dimensions and domains far beyond the mundane and have long been exploring the penumbra between krautrock, psychedelic rock and the ritualistic. With Voix released on 5 February (and reviewed here), the band’s instrumental and methodical exploration of hypnotic and trance-inducing music continues, the “multi-directional labyrinth with a constantly changing map” revealing deeper and darker secrets of primordial profundity. Here, bassist Matthieu Canaguier, talks to MR’s Jason Guest about the album and its creation, the voices of its title, improvisation and ethnology, and the sense of the sacred in making music…

After 2012’s Occult Rock (reviewed here), an incredible album, what challenges did you face when the writing for Voix began?

Well, the biggest challenge was: not to consider the writing of a new album as a challenge, but to go on exploring, to go on creating. Indeed we had the deep feeling of a great achievement with Occult Rock. This album was like a manifesto of our music, a sum of what we did in studio and on stage since our beginnings. But Occult Rock was also a door opened on new horizons, more than the end of an era. The question we asked ourselves when we started the composition of Voix was: what ways do we want to explore? And we entered the labyrinth…

Did you have any specific goals for Voix? What did you want to achieve with the album?

During the recording session of Occult Rock we had a revelation of what we could do with sound. We had new perspectives: it was possible to go deeper into the depths of sonic textures. At that time it was the result of the studio work, and we wanted to transpose that experience into the live performances.  At first, our goal with Voix was to redefine our live sound, experimenting new equipments, new effects, drum skins, amps, etc. And also we were looking for a new way to interact in between us. The conscience of sound depends of our spatial position: how to make the band sounds in a room ? What distance in between us? With these new methods and experiments, we reveal the voices of our sound. All that may seems technical, but behind (or around, or inside…) lays the spirit of our music: the way we create together and channelling energy. Now that I am looking backward, it seems to be a giant step, but it came slowly. It was a long evolution.

How did you approach composition for Voix? Did you take the same approach as on Occult Rock?

Basically it was the same process but with a different orientation. Each of us comes to the rehearsals with an idea, a theme, a rhythm patterns. It was a starting point. Then, we played it again and again, looking for variations, for accidents… that’s where the composition slowly took form. For Voix we composed more material than there is on the album. But at some point we started to refine that material and to arrange the structure only around a few themes and patterns to unify one composition, that long suite called Voix.

We had directions of course. We knew we wanted a sound more clear and spatial. And also we wanted to go further into the analogical recording methods. We recorded the album on tape, for two reasons. The first is that we knew it will reveal the special textures of our composition. The second: it gave to the studio recording more intensity. It is really not the same feeling to record on tape or digital. When the tape is rolling it’s like being on stage, you cannot fail, it’s a bigger pressure. Le grand Jeu ne se joue qu’une fois.

How long were you working on the material? And how much did the material change between the beginning of its writing and its recording?

We started to compose a few months after the release of Occult Rock, early 2013. The material changed a lot as we tested it on stage. When we were on tour in UK with Stephen O’Malley in 2014 we had a live-set made half of some Voix‘s themes and the other from the composition of Occult Rock that seemed to be in the same way of playing (Occult Rock IV and VII). In 2015, we played a very few shows (in Athens, Brussels, Utrecht and Istanbul), where we played Voix fully. It was a way to validate the composition. Playing live new material is the best way to know if it is the right or no. You just feel it in your body. The music talks to you. And even now, once the album is recorded, I know the composition will continue its evolution. It is an endless movement.

Can you tell us about the album title? What ‘voices’ does it refer to?

We had the title Voix (that indeed means voices) in mind since the process of recording Occult Rock. We knew at that time it will be the name of the next record. Since our first album, we had the sensation of the presence of the voices in our music. Something subliminal that lurks into the tiny corners of sounds. And this time we decided to focus on them, revealing and conjuring these voices. We wanted to play with interstices, to find our path in between the notes and the beats, to dive into pure resonances.

When writing for Aluk Todolo, how much of it is improvisation and how much is written before you get together?

At the beginning of Aluk Todolo we were improvising a lot (in a bad way: very long free jams) even on stage. I remember I talked with a girl who studied ethnology and who attends voodoo ceremonies in Brasil and trance rituals in Africa. When I explained her about our quest of trance into improvised music, she looked surprised and said to me: “you know, when priests or magicians go into ecstatic trance, they know exactly what they do, everything is codified”. It was in 2005. And then we began to write our music. It does not mean that everything is fixed. But everything is charged with intentions and pre-exist to the time of the performance. 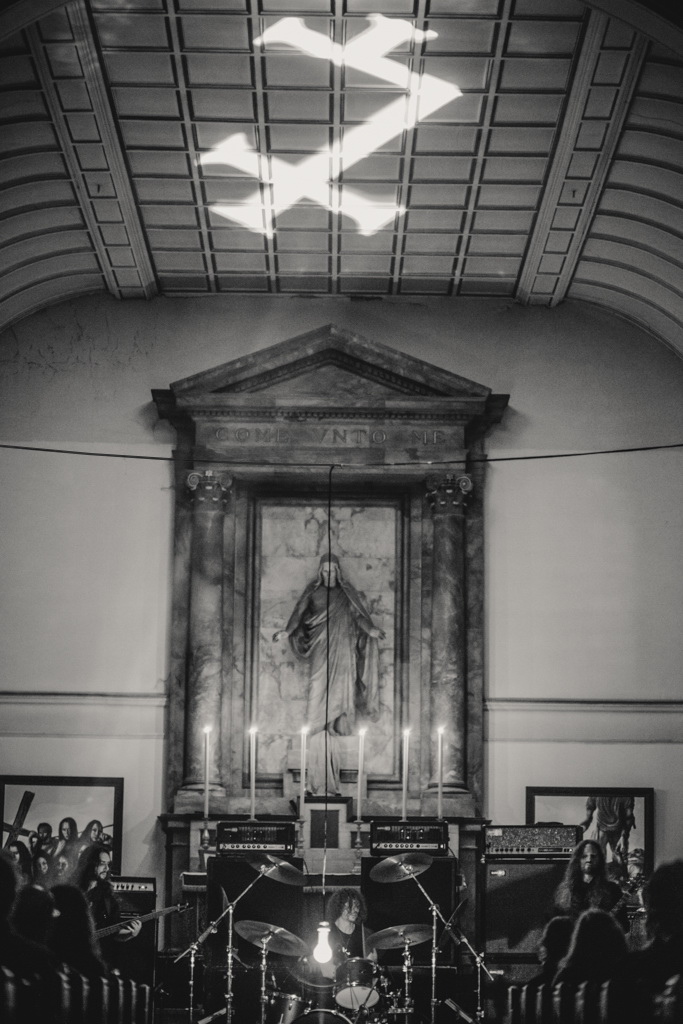 Is how we hear Voix on the album how it will sound live? Do you leave ‘space’ in your material for improvisation in live performances?

Voix sounds live like the album; we recorded it in live conditions, all together in the room. It is exactly what we play. There is no improvisation, but interpretation. Some parts of the composition are totally locked and some others leave us the freedom to explore. But these explorations are made with a very specific goal. We played various versions of Voix, most of the time they are around 40-45 minutes, like the album. But it can be also one hour. It depends of many factors, it’s alchemical and astrological. Time and space.

What does the act of making music mean to Aluk Todolo?

The sense of sacred.

What, if anything, are you searching for when making music for Aluk Todolo?

You’ve been performing as Aluk Todolo since 2004. How has the band developed since then?

After 12 years, I’m glad to see that even if our musician skills improved and we have a better conscience of what we do, we are still very intuitive. I feel like Voix is our first album. It’s a birth, it’s new. I hope we won’t lose that feeling. And if we do one day, we will have the courage to stop. I have great admiration for bands that always keep the same spirit since their beginnings and never stop to experiment and challenge themselves, like Magma or Coil for example.

I don’t think that music is intangible and abstract, for me it’s very physical. Even if sound is invisible, its effects on the body are something very strong. And from those very concrete effects, the mind is touched, and the soul. The power of that thing called music, of these harmonized noises, is an enigma, but also a quest and a necessity.

Any plans for shows in support of Voix? And will we be seeing you in the UK?

Playing shows in UK in 2014 was a great pleasure. Good venues, beautiful audiences. We are working on some plans for the future. Hopefully we will be back soon!

What would be the ideal setting for an Aluk Todolo performance?

To feel close from audience. Not to catch the eyes, but to feel the beings in presence. Performing music is sharing, it’s an act of magic. In the place and time of the performance, everybody is involved.

What does the future hold for Aluk Todolo? Is there more music in the works?

Even if we are focusing on performing Voix on stage, we begin to compose new material. We are also working on old recordings that we to be released as archives documents. 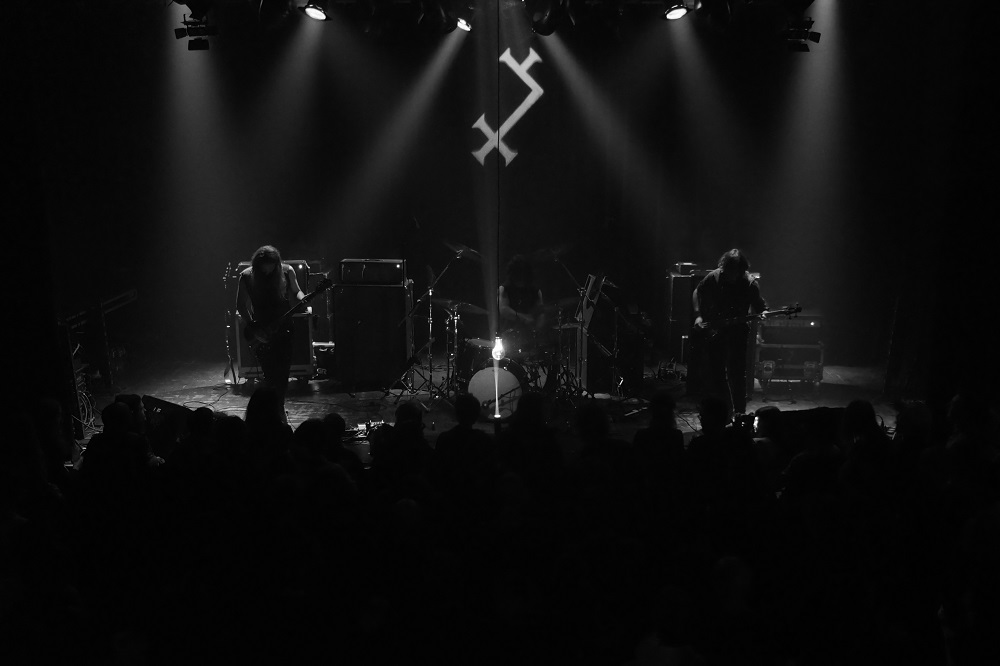