“Sometimes you have to struggle if a place is a little smaller, on the other hand, I know how it is with bigger venues, they don’t win you any medals”

2014 started with a very entertaining tour featuring symphonic metal band Leaves’ Eyes, British fantasy power metallers Pythia and German extreme metal band Atrocity, which meant a busy night for Atrocity singer Alex Krull, who also features in Leaves’ Eyes alongside his wife Liv Kristine. At the end of a long string of interviews, he spoke with Midlands Rocks’ Paul Quinton about, among other things, treasure hunts, singing in different languages and going on a cruise.

Can I start by asking you if you can remember having played Birmingham before?

Yes, with Atrocity, in the 90s. We were here with Obituary, I think.

What are you feelings about this tour so far? Has it been good?

Fantastic tour, I think. Everybody told us that because we were touring at the start of the year, most of the tours aren’t going so good, and we heard, even from radio and TV darlings, that pre-sales weren’t good, 50 here, 50 there. So we thought, ‘well, we’ll see if they’re good to us’ and they have been good. Fantastic audiences and nothing to complain about.

One thing I find fascinating about you personally is you appearing with two bands on the same bill. How does that work for you? Do you find it a difficult thing to do?

Yes, it’s quite demanding. It’s like Dr. Jekyll and Mr. Hyde thing. One side you have the more extreme music of Atrocity and the other side you have the symphonic side of Leaves Eyes. It’s also, I think, really cool that it balances out in a way, instead of having two bands with the same type of music.

Turning to Atrocity first, you must have been really pleased with the reaction to the ‘Okkult’ album. Was I right in thinking you tried to incorporate some different influences on it? Some even called it ‘progressive’?

We were called the first techno death metal band back in the day. I remember on the first album, in 1990, we recorded at Morrissound in Florida, with Scott Burns. After we finished, we had the idea, a wicked idea, a crazy idea, to do the whole album with an orchestra. We were young kids, it was how it was in 1990. But nowadays, we’ve worked with an orchestra before, on the ‘Werk 80 II’ album, we used the choirs and orchestras for the 80s cover versions we did. It gave us a dark vibe and all that. It was something we did before, and we didn’t want to go too progressive or anything like that. It’s more like we wanted to have  a diversity in the music, with that wider field and range with occult topping, which is not only about dark religions or bullshit like that, but people forget that not only is there the real world, but also that there is the dark side of history.

One thing I really wanted to ask you about ‘Okkult’ was the hidden track and the hunt for the gold CD. Where did that concept come from? I’ve seen it before in books, but I can’t remember a rock band doing anything like it before.

It was all my idea, probably from a lot of Indiana Jones movies. It’s the first metal treasure hunt.

How did the fans react to it?

I don’t know how many people actually participated, but there are five or six countries where people have to go and find the hints in the songs. In mostly good places, I can promise you, they can go on the internet, maybe solve a little riddle and that’s it. I thought, ‘hey, let’s do a real treasure hunt, even if it was ten years before anyone found it.

Has anyone found the gold CD yet?

It’s not possible yet, because the last hint, ‘The Stone Of Wisdom’, hasn’t been released yet. It’s like, you go and find the hint, you go back on the internet, then you have to solve the riddle to get to the next step. Then you might have to travel to the next place to find the next hint. We did it this way to be fair to everyone. Not everyone buys the album on the same day for example.

Turning to Leaves’ Eyes, I know the band started so you could work with Liv, but did you feel that there was something you could do with Leaves’ Eyes that you couldn’t do with Atrocity?

Well, yes, if we could do everything with Atrocity… in a way, to have that main part, the female vocals, it would not be possible. We did have my sister, Yasmin, and Liv did backing vocals on the ‘Atlantis’ album, and that’s how it started. I remember that when we formed the band, that liv was with Atrocity on tour, doing guest appearances, then the idea came up, ‘Why don’t we form our own band?’ Liv was with Theatre of Tragedy, doing this type of Gothic metal, and they were turning to this more electronic type of music, and Liv felt that she wanted to have this symphonic part in her musical career. Also lyric-wise, a different concept, doing more with mythology and that kind of stuff.

Can I ask you about the different languages you use with Leaves Eyes, because it’s terrific to listen to. As I understand it, you’re German, Liv is Norwegian, so how do you write in Old English and the other languages?

Liv actually has Masters Degrees in English and German and she also learned to read in other languages, too.

Is she able to write the lyrics herself or do you use translators?

She does it herself, mostly, but for the Gaelic stuff, we have someone from Canada, an Irish person, an old friend, who helped Liv with the right pronunciation and all that stuff.

So, looking ahead, you’re going on the 70,000 Tons Of Metal Cruise, is this something you’ve done before?

No, but we’ve been asked to do some other cruises, but this one is probably the most famous. I’m looking forward to it, and for Leaves Eyes, it fits right in with our US tour.

Do you enjoy playing festivals?

Yes, I have to say it’s fantastic to play something like Wacken, with people dressed as Viking Warriors in armour in the crowd and all that kind of thing, and with thousands of people in front of you, it’s a dream for every rock band.

Aside from performing yourself, do you ever get to see many other bands play? Do you make it an experience for yourself?

It’s quite hard at a festival. To be honest, if you’re at a show like that, you don’t have so much time to yourself. But I do love to play club shows, like we do now. Actually, in our career, we’ve done everything, huge clubs, we’ve played small clubs and been through all kinds of crazy stuff, and very big gigs as well. We’ve toured in over 40 countries, and I’m not like ‘Hmmm, this is a small club today’. Sometimes you have to struggle if a place is a little smaller, on the other hand, I know how it is with bigger venues, they don’t win you any medals.

Leaves Eyes’ new album, Symphonies Of The Night, their fifth studio release, is out now on the Napalm label

Get Okkult by Atrocity here 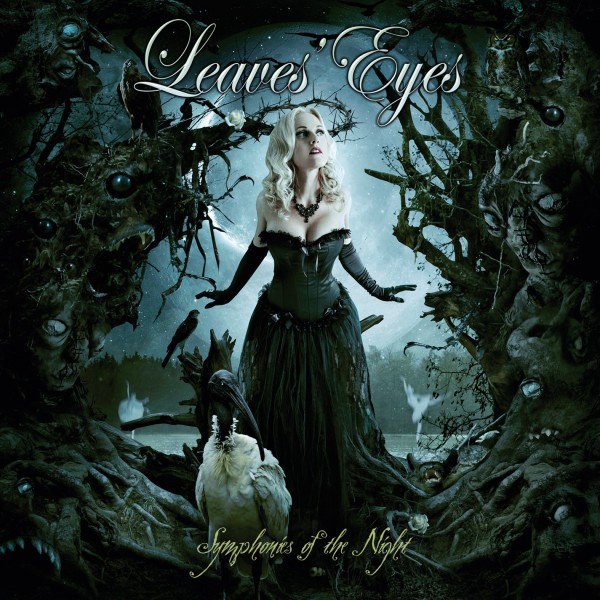