If you don’t know who Alessandro Del Vecchio is then shame on you! He has been in Eden’s Curse, is a current member of Hardline and fronts his own band Edge Of Forever. When he’s not performing, he is Serafino Perugiono’s (head of Frontiers Records) go to guy for producing, performing and writing.

If you want to witness Ale covering all four of these bases, then look no further than Frontiers Records’ January release of Revolution Saints where he wrote eight of the twelve songs and had a hand in writing the rest, produced the whole caboodle, performed as keyboardist and provided backing vocals. He even sung one on his own, the Journey-esque ‘Way To The Sun.’

In a rare moment of quiet, MR’s Paul Chesworth caught Ale on a train ride home….

Ciao Alessandro, I think I have lost count of the number of albums I’ve heard this year where you have had a presence. You don’t have to name them individually but exactly how many albums have you appeared on in 2014 as a producer, writer and performer?

Alessandro Del Vecchio – ‘Well….let me think Paul…mmhh….I guess a lot this year has been crazily busy, but busy is good in this business.’

How on earth do you get the time to do all of these things, your calendar must be rammed full?

Well. It’s tough but I am not able to say no. I’m in love with music and music is what keeps me alive. And also, I gotta add I work better under pressure

I suspect you have a very understanding partner?

What gives you the most satisfaction – writing, performing or producing?

All of them. I am easily annoyed if I do the same thing all over again. So shifting from one task to another makes me active and focused. 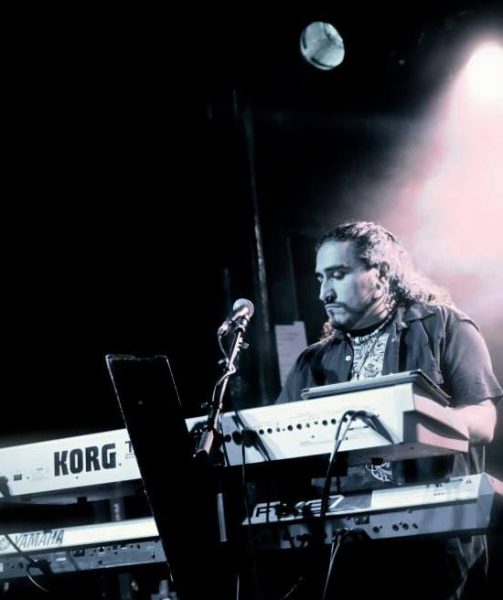 I’ve seen you a few times with the likes of Eden’s Curse / Hardline / Issa, and your voice is fantastic. Would you love to be more front of stage?

Sure I do. I’ve been singing on tour with Ian Paice of Deep Purple, Bernie Marsden of Whitesnake, Carmine Appice and with my own band Edge Of Forever. After the summer we will enter the studio with Edge Of Forever for our fourth album. That’s my vocal home. I’m also recording as a singer for two albums. One is a metal record and it’s kind of a nice challenge. Vocal parts are more like Russell Allen’s work on “The Damnation Game” than my usual melodic thing. The other one is with Domink Pfizer of Shakra. I also gotta add, I sing on a song on the forthcoming Revolution Saints record. The song is called “Way To The Sun” and Neal Schon of Journey plays a marvellous solo. I guess, you shouldn’t stop dreaming!

How did you get involved with all the Frontiers work? I guess the Italian melodic rock community is a tight knit one.

Well. I guess I knocked the door on the right time. We knew each other already as I did 2 albums with Edge Of Forever on MTM which was distributed by Frontiers back when MTM was a top label. I was looking for a label to work for and they were looking for a producer and songwriter.

I guess you can’t say no to Serafino?

Serafino is great. I mean, our music would be dead without him and the people at Frontiers. How could I say no to the amazing works he makes me do? I owe him a lot. I respect him for he trusted my work and abilities and pushed me to be the producer I am today.

Out of all the above work you have done in 2014, which is the one thing that has stood out for you?

Writing, producing, recording, playing, singing and experience my top work ever with Revolution Saints. Being in the studio with Deen Castronovo, Jack Blades and Doug Aldrich is more than I could dream of. Not bad for an Italian.

What are your plans going into next year?

I’m in the studio now with Craig Goldy and Vinny Appice for Livin’ Out Loud, their new band. I’m actually completing writing the new Hardline record and we should start recording in spring if inspiration helps me on the last few touches on the song. In February we should start working on the new solo record by Ted Poley. I’m also producing the finest voice in metal which is gonna be awesome.

Ok, Santa. Please let me enter a big act like Whitesnake or Foreigner, produce and write for Journey and be the guy who is getting Steve Perry back on a record. Hey, didn’t I say you shouldn’t stop dreaming?’ Or should that be Believing?

Any last message to the AOR community?

‘I would like to thank all of the people who supported me through the years buying my music and helping me being who I am today. My biggest challenge is to keep my love for music fresh and alive every day and be the guy who is gonna help people feel better with my music.

How did the project with RS come about?

Serafino of Frontiers had this idea of having Deen sing on a record. One day I was asked to write some songs as a proposal for the album as a project with me on the production duties. Been heard the demos and was right after enthusiastic about the idea of making a band out of it. We talked about different musicians but the first names were Jack and Doug. The music did the talking first which is what I liked about these guys. They wanted to like the material first.

Were they happy to just come in and record already written songs?

Sure. We had something like 17 songs idea and we went for the 11 we thought stronger and we all liked “To Mend A Broken Heart” by Eclipse and to re-record it with our own spin.

As a writer, do you have a set idea for the songs or were you just happy to let them put their own stamp on things?

I’m a zero ego when it comes to music. When you have stunning talents like these guys you just can’t simply say “Do this and do that…” it’s always a team effort and I’m definitively a team player.

Out of the whole album…What song stands out for you?

Way To The Sun.

…and what was the most memorable thing for you that you can share?

When Deen gently “forced” me to sing on Way To The Sun. He simply told me he wouldn’t sing the whole song if I didn’t sing.

It must be a dream working with ABC (Aldrich Blades and Castronovo)? That’s a great name for a band! Were you nervous? I bet even more so when Pinada and the mighty Neal Schon got involved?

Well. I wasn’t. I gotta be honest. I’m never nervous when it comes to things like this. I actually was moved when I heard Neal’s solo on that special song. But I knew I was there because I worked hard and my music and skills did the talking before anything. Jack is one of my favourite producers and we always joked on me producing a producer and him being a producer produced (by an Italian haha)

Please tell me there are plans to play at least a festival?

Sure we do. Schedules are crazy and we will try to work around everybody’s commitment.

So there you have it. Talented songwriter (His songs for Revolution Saints are the type of quality that Neil Schon would kill his cat for), great producer, in demand performer for keyboards and backing vocals, but most of all a truly great singer who deserves to be heard by many more. To top it all off, he is also one of the nicest, down to earth people I’ve had the privilege to ever meet. I wish him great success in 2015 and beyond.