A way to fracture time…

Comprised of SG on “proclamation, rhythmic conduction, wind instruments, fire-water and amplified wood” and AC on “electricity, synthesizers, earth, wind instruments, repetition and space”, Portugal’s Tendagruta are a beautifully odd entity. With Ensalmo Do Sargaço, a compilation of the band’s works thus far, to be released on 6 May, MR’s Jason Guest talks to AC about its release, the unity between the tracks, the band and what inspires them, and the relationship between animal bones and cassettes…

Ensalmo do Sargaço (reviewed here) gathers tracks that either appeared individually or were to be found on compilations elsewhere. Why choose to release them as one collection now?

AC: Those compositions are now a unique body as it was intended to be since the beginning. Mere chance and circumstantial demands lead to its dismemberment through various outputs and channels.

Each of the tracks is a world of its own, unique, yet they all work together very well. Is there a common element between the tracks that unites them?

AC: As a collage of elements, this body of work functions as a whole. It is the search for a landscape, or should I say a soundscape, capable of transcending empirical perception of what is called reality. Our compositions live in the gap between the echoes of the past and the ruins of the future.

When writing / creating, do you have an idea of what you want the tracks to sound like or do they take shape as they are being developed?

AC: There is always an idea, an image or word to relate with. Even in randomness our own inherent cosmology of references and sensory experience collected throughout our lives on this world define what to keep and what must be erased and where to we lead the narrative we are trying to build. But most of the time, this idea is not clear, but more as a fog. A mere intention that serves as a drive force to take us somewhere.

What, if anything, are you searching for when making music for Tendagruta?

AC: A way to fracture time.

Can you give us some background on Tendagruta? How you formed and what it was that drew you together to create under the name Tendagruta?

AC: We know each other for almost a decade and the beginnings are closely related to Sektor 304 (Facebook, Bandcamp), a project I crafted with J. Filipe back in 2007 if I recall correctly. S.G. was there from an early stage and was someone who accompanied us since then. It was only natural that this collaboration emerged.

Musical or otherwise, who or what influence or have influenced Tendagruta?

AC: More than all the music we listen I believe that it was a small book by Tonino Guerra: Abandoned Places: Poems. There is a feeling of temporal transcendance inherent to those verses that are probably the main drive for Tendagruta’s Ensalmo do Sargaço.

How has Tendagruta developed since its formation?

AC: In fact, the only recording period, which resulted in Ensalmo do Sargaço is the only “momentum” within a human time frame where Tendagruta actually existed. Currently, new projects are being developed by the dimorphic entity formed between both members, but the name Tendagruta is quiet… although life is again running through our hermaphrodite veins. Therefore, a notion of development is awkward to us.

What does the act of making music mean to Tendagruta?

AC: Expression. A way to relate with the inner and outer space. Our own “interzone”.

Ensalmo do Sargaço is being released on a limited cassette run of 50 with animal bones included. Okay, two questions: why cassette only? And why include animal bones?

AC: This option was given to us by Signal Rex’s leader as a way to enhance the edition. It relates to the temporal aspect of the release. Tape, as an analogue format is closely connected to erosion and bones are the relics left behind on this world.

Will Ensalmo do Sargaço see a release on any other formats – Digital, CD, vinyl? If so, any dates in mind?

AC: Ensalmo do Sargaço was initially presented as a digital release, but this was only due to finantial circumstances that are not relevant right now. We are obviously open to discussion concerning other re-releases as well as for future material.

AC: The technique of collage features the capacity of creating juxtapositions of time frames and concepts that go beyond what is called “common sense”. Erosion and fragmentation are also part of it. This artwork is closely connected to Surrealism, which we consider as a process of breaking the castrating notions of time and space. Perhaps our music IS surrealist.

AC: The artwork was fully developed by me.

Do you have any plans for shows by Tendagruta?

AC: Performances were developed in two occasions, both with a different approach: at the Matanças festival, with the aid of a third member, was a rather oppressive and chaotic action, dealing with the imminent failure inherent any movement driven by rage and anguish. The second action was also performed at Porto, but in a different context. It was entitled “Of Rust & Dust” and part of the Occult Esoterica AV Gatherings. This second moment is closely related to the body that is Ensalmo do Sargaço. As mentioned previously, this new life flowing through the veins of Tendagruta activated a wish for more. But as in most things of this life, wishing is not a sign of completion, but it is the best sign for engaging.

What would be the ideal setting for a Tendagruta performance?

AC: Spectators with will.

What does the future hold for Tendagruta? Is there more music in the works?

AC: Thank you so much for this moment of interaction which was only possible due to your honest interest and appreciation of our work. 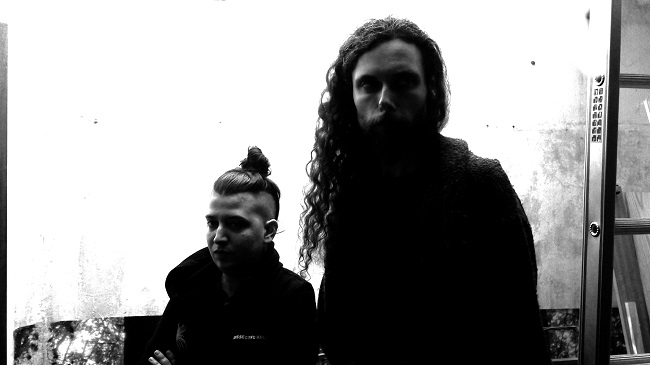