Interment raise their head once again…

I don’t think it’s unreasonable to suggest that Sweden knows more than most when it comes to crafting melodic death metal music, songs that throb with soaring riffs, whilst retaining the essential anger that fuels death metal.

You’d need a pen full of ink to document all the great Swedish death metal bands but the name ‘Interment’ possibly wouldn’t knock the likes of At The Gates off the top spot.

Formed in ’91, Interment made their mark on the Stockholm scene, squeezed out an album, unwittingly called ‘The Last Chapter’ and then gradually ebbed away as various band members moved to pastures new.

Almost 20 years passed with little or no mention of Interment until original guitarist Johan Jansson started formulating plans for a reunion, which led to the band laying down five totally new tracks for the Conjuration of the Sepulchral EP. 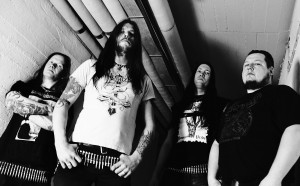 Having reunited in the studio, the following year 2007, saw them back on stage and within months Interment  played their first ever show outside Sweden when performing at the Party San Open Air in Germany.

While further line-up changes have taken place over the last decade, Interment now appear ready for a more concerted approach and have just released Scent of the Buried, via Portuguese extreme metal label Pulverised.

The album could hardly start more convincingly with an almighty roar ensuring first track ‘Death and Decay’ gets off to an explosive start. It’s an impressive and ferocious opener creating the impression Interment are keen to make the most of this second, or indeed, third coming.

Although coming across like the barbaric hordes of some distant mythical land, Interment’s riffs latch onto you like a blood-sucking leech. One stuck on, you just can’t shake the great fuzzed up guitar grooves off. As for the breakdowns… these are of skyscraper proportions, absolutely towering slabs of granite.

Having set their stall out from the off, ‘Sinister Incantation’ sees Interment bulk things up further with another rancid attack in the finest traditions of old school Swedish death metal.

There’s a neat sidestep at the start of ‘Chalice Of Death’ but once the venom is released Interment’s devilish riff assault works its magic while singer Johan Jansson barks out the song title.

The rat-a-tat-tat tempo is still with us through ‘Repugnant Funeral’ while the start to the album’s bruising title track ‘Scent Of The Buried’ is textbook Slayer, an acute riff cutting through the debris with real menace.

With song titles such as ‘Unholy Upheaval’ and ‘Dawn Of Blasphemy’ you almost need a mop to soak up the satanic emissions, while ‘Skull Crushing Carnage’ does exactly what it says on the tin.

It’s intense, insane and incendiary. If you’re still standing by the time you reach album closer ‘Nailed to the Grave’ you’ll probably feel like you just have been.

Why not just give the gym a miss and listen to Scent Of The Buried instead. It probably won’t beef up your triceps but Christ, your neck will bulk up like a rhino’s. 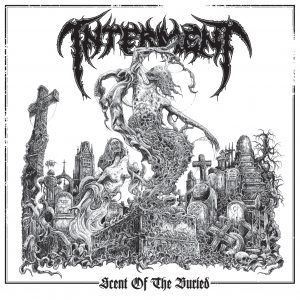