A night of European melodic metal at Birmingham’s newest club venue, what more could you ask for? Clearly plenty of others agreed and by the time Fleshgod Apocalypse came on stage, the 400-capacity room looked pretty much full.

Before headline act Insomnium brought their fiery Finnish sound to the stage, Fleshgod proved something of a revelation. Nattily attired in full coat and tails, complete with dangly cuffs and ill-fitting bow ties, the Italian powerhouses gave the impression that they’d just stepped off the set of a Dickensian film shoot. They would certainly have turned more than a few heads if visiting one of the salubrious inns in Digbeth for a pre-gig tipple.

The great thing with Fleshgod Apocalypse is that it’s not all image – anything but. Opening with ‘The Hypocrisy’, the Perugia performers gave a high octane performance full of theatrical twists. To help them achieve their goal of crossing metal with opera was acclaimed professional singer Veronica Bordacchini who stood in the shadows to one side playing the keyboard, stepping forward whenever the time was right to deliver her piercing gothic soprano screams. To complete the overall operatic effect she wore a face concealing Venetian mask. 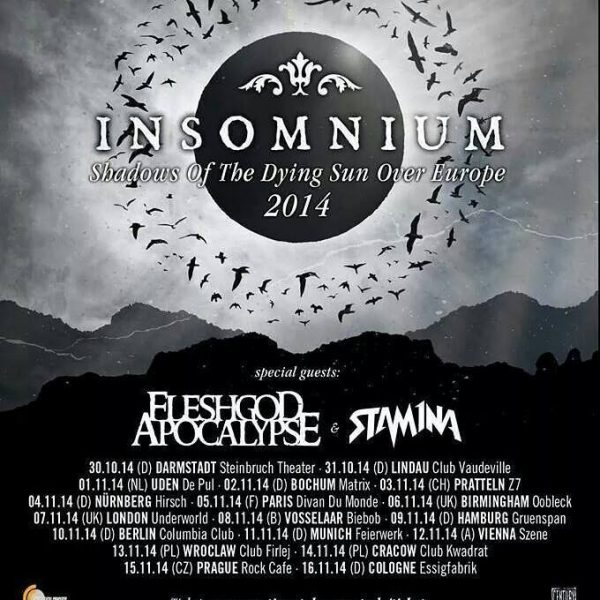 With Veronica’s timely interventions aside, Fleshgod Apocalypse conjured up some real fist pumping metal with tracks such as ‘Requiem In Si Minore’ and ‘Epilogue’.

Insomnium arrived in Brum midway through a month long Euro tour. Only two UK visits (London being the other, of course) ensured that the Oobleck crowd was made up from fans who travelled some distance – even a few Euro accents were detected.

The Finns have always been masters of metal melancholy although this show featured heavier material than I had been expecting. After the haunting intro of ‘The Primeval Dark’, – the first track on latest album Shadows of the Dying Sun – they then quickly drew the desired response from the crowd with the more up tempo ‘While We Sleep’.

Vocals are shared between Ville Friman and bassist Niilo Sevänen, the latter has a rougher than sandpaper growl, which is more often associated with death metal bands. The combination works well against a an atmospheric backdrop and grooves so deep you almost trip over them.

Shadows of the Dying Sun is the Finns’ sixth album and while providing some material on the night they also dipped into the back catalogue, including when stretching back to 2002 and the debut album In the Halls of Awaiting when singing ‘The Elder’.

Stand out songs included ‘The Harrowing Years’ and ‘Ephemeral’. Bowing out with one more from the latest release, the mournful ‘The Promethean Song’, they returned for a four-track encore, finally signing off with ‘Weighed Down With Sorrow’.

Even then they came back for a team pic on stage! After such a night it’s nothing less than they deserved.

Setlist:
1. The Primeval Dark
2. While We Sleep
3. Revelation
4. Daughter of the Moon
5. Only One Who Waits
6. The Harrowing Years
7. Weather the Storm
8. The Elder
9. Last Statement
10. Ephemeral
11. The Promethean Song