Global Rock Records have quickly become the Litmus Test for all that’s good and heavy, and in a short period they’ve assembled an impressive roster and catalogue. They’ve recently made the complete Impellitteri discography available, and as a companion piece, a three disc “best of” overview has been assembled in the shape of Wake The Beast. Compiled by guitarist and band leader Chris Impellitteri, this collection includes all the band’s best-known tracks, deep album cuts, and rare bonus songs to make this, their first ever career spanning compilation, the ultimate Impellitteri anthology.

Opening with the title-track from their 1993 EP Victim Of The System, this compendium gets off to a blistering start and introduces many themes that will echo throughout. Like a bullet from a gun ‘Victim Of The System’ races along and perfectly blurs the lines between trad metal and thrash. Chris’ guitar work is spellbinding, and he shreds like a monster, but never to the point of superfluity, and as a backdrop the rhythm section lock in tightly to deliver a solid beat. The band have had a series of high-profile vocalists over the years, but Rob Rock is the voice most associated with Impellitteri, and his rustic, oak-aged vocals bring the song to life. From here we fast forward a decade to the System X album which found the legendary Graham Bonnet at the mic stand, and his rasp pushes all the needles into the red on ‘Perfect Crime’.

This collection doesn’t run chronologically, rather it bounces around the band’s career like a pinball, and while it does flow well, sometimes the shifts between tracks can be jarring. For example, the raw power of 1987’s ‘Lost In The Rain’ sits next to the lush production of 1996’s ‘Father Forgive Them’, and while they’re united by the same energy and musicianship, they were obviously recorded on different budgets, and the sonic shifts between the two is quite startling. But that’s only a minor quibble when the disc includes classic cuts such as ‘Hungry Days’ and the face-melting instrumental ‘17th Century Chicken Pickin’’.

While Chris Impellitteri is well-renowned and regarded amongst fellow musicians, I often think he doesn’t get due respect from the wider populace, and why remains a quandary (but maybe the masses really are asses). What Wake The Beast perfectly illustrates is the multifaceted nature of Chris’ playing. Impellitteri were one of the few metal bands who made it through the grunge revolution unscathed, and they went totally against the grain with their 1992 masterpiece, Crunch. ‘Texas Nuclear Boogie’ from that album opens the second disc and finds Chris in full flight, and here’s the rub; no matter how fast he shreds, he never loses sight of melody, and subsequently ‘Texas Nuclear Boogie’ remains catchy as hell. The following ‘Speed Demon’ is an all-out-rocker that reminds me of classic Dio, and it leaves a trail of scorched earth in its wake, while ‘On And On’ is a ballad of baroque beauty on which Chris employs the maxim ‘less is more’ and allows every note to breathe. That’s three radically different approaches to three songs, yet they have a certain something that ensures they hang together as a cohesive whole.

While I find many guitar virtuosos soulless in a clinical, surgical way who are more concerned with technical proficiency as opposed to feel (stand up Yngwie Malmsteen!) Chris Impellitteri seems to cover both bases. It’s no easy feat to make the shredding found on ‘Freakshow’ and ‘Wicked Maiden’ palatable for mass consumption, yet Chris somehow does. Maybe it’s because I associate Graham Bonnet with classic metal bands such as Rainbow, Alcatrazz and Blackthorne, but his vocals seem antiquated when accompanying the forward-facing music of tracks such as ‘Rock And Roll Heroes’. His voice acts an anchor that tethers the band to the past, and I’d argue that it wasn’t until Rob Rock rejoined the band (after a hiatus filled by Mr. Bonnet) that the band started to sound more contemporary and ready to take on the world. The sequencing of this album is perfect, and it provides two hours of the best air guitar inducing, headbanging music, and the raucous ‘I’ll Be With You’ closes the set in a rumbustious manner, which is exactly where the band came in.

Featuring 33 tracks culled from 12 releases, Wake The Beast compiles the very best of Impellitteri from the years 1987-2012. At present Chris Impellitteri might not be a household name, this set looks set to change that anomaly. 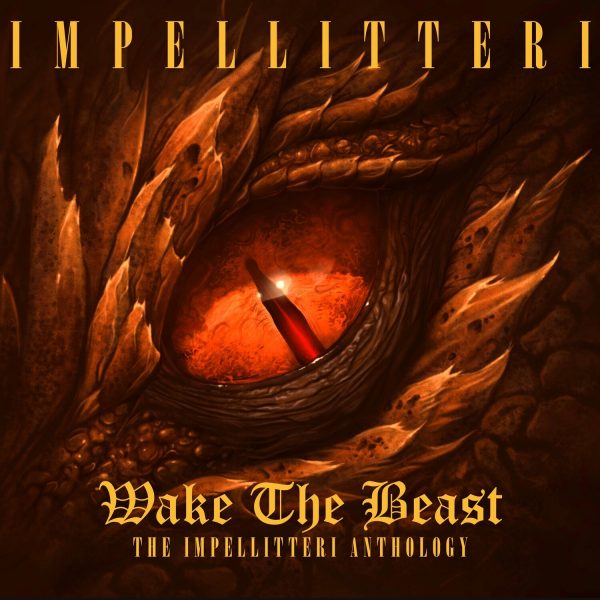